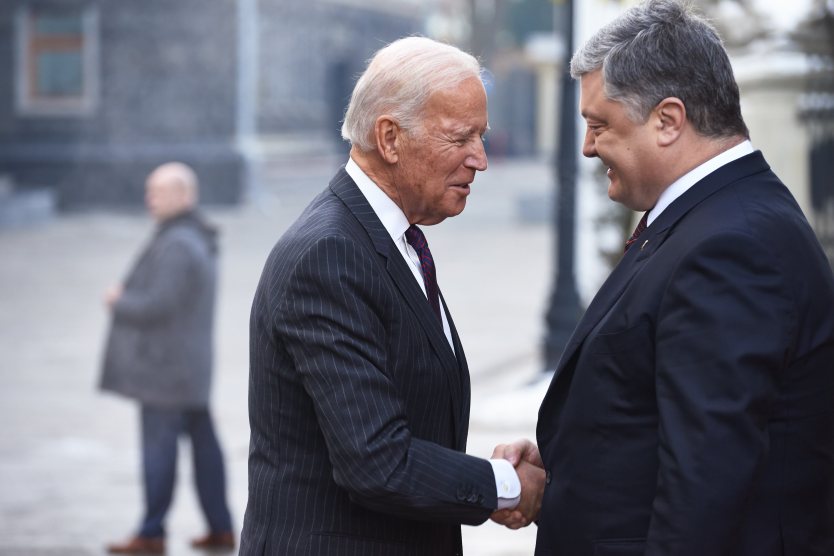 A Ukrainian lawmaker on Tuesday released edited fragments of recordings of phone conversations between former Vice President Joe Biden and former Ukrainian President Petro Poroshenko. The recordings don’t contain any evidence of wrongdoing by the presumptive Democratic presidential nominee, as the lawmaker and right-wing websites claimed, but they do reveal a new effort by a shady cast of Ukrainians and Americans to smear Biden with bogus allegations.

In a press conference on Wednesday, Andriy Derkach, a member of Ukraine’s parliament, played recordings from 2016 that he said confirm the familiar but discredited accusation that Biden forced the firing of a Ukrainian prosecutor general, Viktor Shokin, to help shield a Ukrainian gas company that employed Biden’s son from investigation. But the tapes are a dud. The gas company, Burisma, doesn’t come up at all. The recordings in fact support Biden’s public explanation that he pressured Poroshenko to fire Shokin—by threatening to withhold international loan guarantees from Ukraine—because Shokin had failed to bring cases to address rampant corruption in Ukraine and to reform the notoriously corrupt prosecutor’s office.

Biden can also be heard advising Poroshenko to accelerate the nationalization of a Ukrainian bank, Privatbank, which was controlled by a powerful oligarch, Igor Kolomoisky, who had been accused of embezzling billions from it. (A grand jury in Ohio is now reportedly investigating whether Kolomoisky laundered funds stolen from the bank through Cleveland-area real estate transactions.)

Biden told Poroshenko to move fast to prevent the matter from complicating Ukraine’s relationship with the incoming Trump administration. “I don’t want Trump get into the position where he thinks he is about to buy onto a policy and where the financial system is going to collapse and he is going to be looked to to pour more money into Ukraine,” Biden said on the recording. “That’s how he’ll think about it before he gets sophisticated enough to think about the details.”

Biden seems to have been offering constructive advice to Poroshenko and perhaps even helping Trump, then the incoming president, by resolving a thorny issue before he would take office. Where’s the scandal in that?

This stunt makes clear that Trump’s allies have not given up on using the Ukraine scandal against Biden—even if it does not exist.

Derkach has a long history of ties to Russian intelligence. His father is a former KGB officer who became head of Ukraine’s intelligence service. Derkach studied at Moscow’s FSB Academy, which trains Russian intelligence officers, in the 1990s, and he was later a member of Ukraine’s pro-Russian Party of Regions. He met in Kiev last December with Rudy Giuliani, Trump’s personal lawyer, and is part of a cohort of Ukrainians who have appeared eager to disseminate allegations boosting Giuliani’s attacks on Biden.

Last month, Derkach hired his former colleague in Ukraine’s parliament, Andrii Artemenko, as a US lobbyist. (Artemenko now appears to reside in the United States, with property in Florida and Virginia.) Artemenko’s contract with Derkach says Artemenko’s firm, Global Management Association Corp., will help Derkach contact Trump administration officials and Congress regarding “international corruption in the area of providing Ukraine with international technical assistance and loans, interfering with the activities of central and law enforcement agencies, and unlawful impact on the country’s domestic economic and political processes as well as attracting investments in machine industry and fuel and energy industry.” That wide-ranging description suggests this could be an effort to help Derkach push allegations about Biden in the United States.

Another lobbyist at Global Management Association Corp., Nabil Bader, denied that the work for Derkach relates to Biden. But Bader said he could not discuss the work further due a nondisclosure agreement with Derkach. Artemenko did not respond to inquires from Mother Jones.

The publicly available information about Global Management Association Corp. is murky. It lists a Washington address in what appears to be shared office space, but it is incorporated in Wyoming. It is 75 percent owned by Artemenko’s wife, Oksana Kuchma, according to a foreign lobbying registration filed in April with the Justice Department. Bader told Mother Jones that Artemenko runs it but launched it under his wife’s ownership because he travels frequently.

The firm’s executive chairman is listed in documents as “Andy Kuchman.” Artemenko told Politico last month that he changed his name in 2017 to “Andy Victor Kuchma” to make it easier for Americans to understand.

Artemenko also participated, under his given name, in Giuliani’s efforts to smear Biden. He appeared with Giuliani in a video report aired earlier this year by the ardently pro-Trump One America News Network. In the hour-long video, Artemenko made a variety of allegations about Biden without any substantiation.

Artemenko has been mixing it up in American politics for several years. In late 2016 and early 2017, he secretly pushed for the Trump administration to embrace a “peace plan” to end Ukraine’s ongoing war with Russia on terms favorable to Moscow. After the New York Times reported on his effort, he was investigated for treason in Ukraine and stripped of citizenship in 2017. He was also interviewed by Special Counsel Robert Mueller. Artemenko has told reporters that Russian officials supported his peace plan.

Under his new name, Artemenko runs several companies in Florida. Those include AirTrans LLC, a shipping company whose website says it is part of Frontier Resource Group, which is led by Erik Prince, the controversial founder of Blackwater and the brother of Education Secretary Betsy DeVos. Artemenko told Politico that he and Prince “are working together.” Prince has not commented on that claim.

Prince himself has been involved in dubious foreign dealings. In 2016, he funded efforts by Trump allies to find Hillary Clinton emails that they believed had been obtained by overseas hackers. Last year, the House Intelligence Committee asked Congress to consider charging Prince for making false statements to lawmakers in a 2017 interview about a secretive January 2017 meeting he had in the Seychelles with the head of a Russian sovereign wealth fund. At issue was whether this meeting—arranged by the leaders of the United Arab Emirates—was an attempt to set up a secret back channel between Vladimir Putin’s government and Trump’s circle. The Justice Department said in February that it was looking into charging Prince.

Derkach’s release of the recordings of these seemingly routine conversations between Biden and Poroshenko appears to be a continuation of the campaign led by Giuliani—and cheered on by conservative media outlets, especially Fox News—to taint Biden with baseless Ukraine-related allegations. Giuliani declined to tell the Washington Post whether he knew of Derkach’s release of the Biden recordings in advance. He did say they were the “just the tip of the iceberg.”

There’s much that remains unclear about the connections between Giuliani, Derkach, Artemenko, and Prince. But despite Trump’s impeachment over his machinations in Ukraine, this stunt makes clear that Trump’s allies at home and abroad have not given up on using the Ukraine scandal against Biden—even if it does not exist.