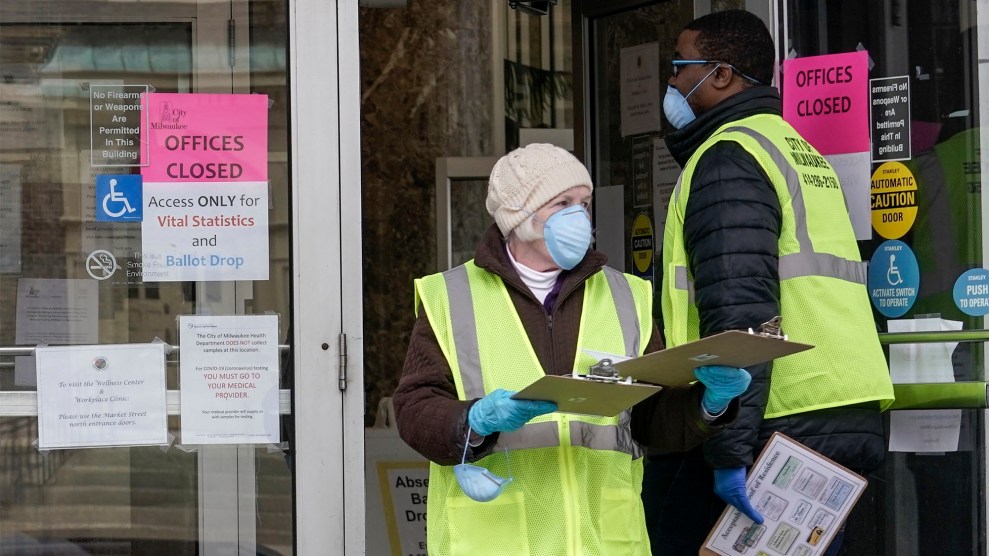 While ten states with primary contests originally scheduled this month have delayed them or switched to all-mail voting, Wisconsin, the lone exception, is moving ahead with its election on Tuesday, April 7, despite a rising death toll from coronavirus in the state and a stay-at-home order issued by Democratic Gov. Tony Evers.

“I’d never want to hold an election under these conditions.”

The date can only be changed by the Republican-controlled state legislature, which has both refused to postpone it while rebuffing calls by Evers to mail a ballot to every registered voter. With just days before voting is set to take place, hundreds of thousands of citizens could be unable to participate on Tuesday, with a critical state Supreme Court election being decided alongside a Democratic presidential primary between Joe Biden and Bernie Sanders. On Wednesday Sanders called for the election to be delayed, saying “people should not be forced to put their lives on the line to vote.”

Last Friday, Evers called for the election to take place as scheduled, but urged that a ballot be rushed to every registered voter with a pre-paid return envelope, but Republican Assembly Speaker Robin Vos called that proposal “logistically impossible and incredibly flawed” and said without evidence that it was an “invitation for voter fraud.” Republicans may be counting on low Democratic turnout to help them win a statewide contest on Tuesday’s ballot, between incumbent state Supreme Court Justice Dan Kelly, who has been endorsed by Donald Trump, and progressive challenger Jill Karofsky. While Republicans currently have a 5 to 2 majority on the court, a win on Tuesday could set Democrats up to flip the balance of power in 2023. (Progressives narrowly lost a close Supreme Court election last year, after which Eric Holder, Obama’s former attorney general, criticized Democrats for not devoting more resources to the race.)

A Kelly victory could have a big impact in a pending voting rights case: in December, a Wisconsin judge ordered that 232,000 voters would be purged if they failed to respond to official elections mailings at their registered address. While that move has been blocked by a state court of appeals, the Supreme Court could reinstate it; while Kelly has so far recused himself from the proceedings because he once advised the conservative group that brought the lawsuit, he’s said he could rejoin the case if he wins re-election. That raises the possibility he could take part in a ruling that would ensure tens of thousands of voters—disproportionately from Democratic areas—are deactivated from the voting rolls months before a critical presidential election and in the midst of a nationwide pandemic.

With the election scheduled to take place as normal, turnout among key Democratic constituencies could fall precipitously, particularly among college students, whose schools have moved to online-only classes, and in Milwaukee, the epicenter of the state’s outbreak and home to 70 percent of the state’s black population. Milwaukee County boasts just 16 percent of Wisconsin’s population, but has made up half of the state’s roughly 1,600 coronavirus diagnoses and 16 of its 32 deaths—the vast majority from black or Latino residents.

“It’s not right from a public health perspective.”

Preliminary returns of ballots suggest that voting is taking place among a dramatically reshaped electorate. To date, absentee ballots are being returned at a much higher rate from the staunchly Republican counties outside of Milwaukee than from heavily Democratic Milwaukee County or in Madison’s Dane County. Relative to 2016, turnout has fallen the most in poor, heavily black neighborhoods in Milwaukee, according to Neil Albrecht, executive director of the city’s election commission. “Real democracy is when every eligible voter has an opportunity to cast a ballot—and we couldn’t be further from that right now in the city of Milwaukee,” he says.

If voters do not vote absentee, it’s highly unlikely they’ll show up on Tuesday in large numbers, and those that try to will face dramatically reduced opportunities to vote. The state is short nearly 7,000 poll workers, prompting 111 communities to admit they have no one willing or able to operate their elections. Milwaukee has cut the number of polling places from its usual 180 to just five. While Evers has taken the unprecedented step of asking the National Guard to staff polling places, that won’t make up the labor shortage, nor convince voters it’s safe to show up. “People are going to be making a very difficult decision on Election Day and have to choose between placing themselves at some level of risk or they’re going to choose not to vote,” Albrecht says. “As an election administrator I’d never want to hold an election under these conditions.”

While a record number of around a million Wisconsin voters have requested absentee ballots for the April 7 election, that’s well short of the 2.1 million people that participated in the 2016 presidential primary. The state’s absentee ballot laws are notably restrictive—a voter must get a witness to observe them signing their ballot, a particularly burdensome requirement at a time of social distancing. Election officials in Milwaukee have already received 450 absentee ballots that cannot be counted because they lack a witness signature. Voters must also include a copy of their ID with their absentee ballot, even though many people will be afraid to travel to or spend time in lines at the DMV to obtain a government ID if they lack one. In the city of Madison alone, there have been over 1,200 absentee ballots submitted without the required ID. Ballots must be received by Election Day to count, and many voters may not receive a requested absentee ballots in time given the unprecedented volume of requests being handled by already short-staffed election officials. Meagan Wolfe, the top administrator for the Wisconsin Elections Commission, anticipated that as many as 27,000 ballots could arrive after Election Day and not be counted.

Albrecht and other election officials across Wisconsin have strongly argued for the election to be postponed, just like nearly every other state faced with conducting an election under the pall of the coronavirus. “It’s not right from a public health perspective and it’s not right from a voter access perspective,” Albrecht said. “There’s nothing fair about this election.”

Wisconsin has emerged as a key battleground in Republican efforts to make it harder to vote. In 2016, the state’s GOP-backed voter ID law prevented up to 23,000 people from voting in Dane and Milwaukee counties, according to a University of Wisconsin study, with black voters three times as likely as whites to say they were deterred from voting.

The spread of coronavirus will now make getting to the polls that much harder. It’s a scary situation for voters and a potentially nightmarish one for Democrats. Low Democratic turnout has helped Republicans maintain a controlling majority on Wisconsin’s state Supreme Court, just as it stands poised to decide a case that could further suppress Democratic participation in one of the country’s most important presidential battlegrounds.

UPDATE: Late on Thursday, a federal judge declined to postpone the election in response to a lawsuit by Democrats and voting rights groups seeking a delay, but relaxed some absentee rules, allowing voters to skip witness signatures and return ballots as late as April 13.