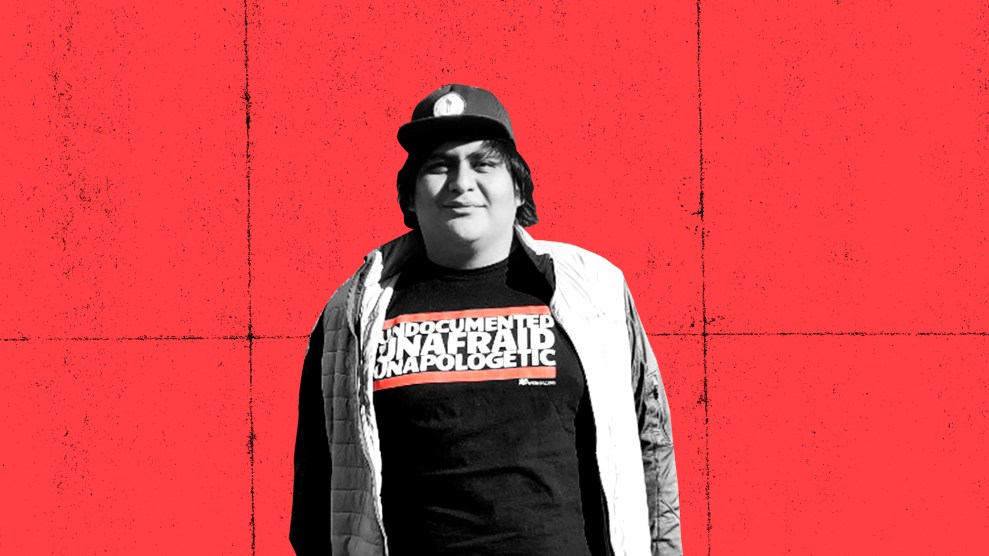 For most of their life, Victor Garcia lived in two closets. As a teen growing up in Houston, Garcia came out as queer to their friends and family, but it wasn’t until years later when Donald Trump became president that they came out as undocumented.

By then, Garcia had too much at stake not to tell the people in their life. In the summer of 2012, when Garcia was 18, President Barack Obama launched the Deferred Action for Childhood Arrivals (DACA) program, which allowed young-adult immigrants who’d been brought to the United States as children and who didn’t otherwise have legal status to apply for a two-year work permit that also protected them from deportation. Garcia was quick to apply for and receive DACA, and they later renewed it twice before the 2016 election—all without telling people about their status as a so-called Dreamer. But once Trump took office and began dismantling DACA, Garcia finally told their friends and coworkers. “If the current administration was to come for me, people were going to find out,” they told me recently. “I wanted people to know they knew someone that was being affected.”

DACA changed Garcia’s life and the lives of nearly 700,000 undocumented immigrants who were brought to the United States as kids. Deportation relief under DACA had, for years, been seemingly the one thing that had support across party lines when it came to immigration reform. DACA recipients have been able to attend college and fill jobs that are often unattainable to those without legal status in the United States. They’ve formed families, bought homes, and while “they’ve planned their lives in two-year increments, it’s important to recognize that they have planted roots here,” said Jose Muñoz, national communications manager with the advocacy group United We Dream. (DACA recipients are parents to some 250,000 US citizen children.)

But thanks to the hardliners behind Trump’s draconian immigration policies, the program’s future could be decided by the Supreme Court as early as next week—right in the middle of a pandemic that has put many DACA recipients at the center of the country’s response.

“If the current administration was to come for me, people were going to find out. I wanted people to know they knew someone that was being affected.”

On Monday, the Supreme Court agreed to consider a brief that urges the court to think about the “life-sustaining role played by over 200,000 DACA recipients who are frontline workers in essential services.” An estimated 29,000 DACA recipients are health care workers, about 15,000 are educators, and 80,000, like Garcia, are employed in the food service industry—essential workers who have become the unexpected heroes of the crisis. “Termination of DACA during this national emergency,” the brief notes, “would be catastrophic.”

For Garcia and hundreds of thousands of other DACA recipients, it would mean navigating life in a completely new way. Garcia, 26, was born in Mexico City and, when they were four years old, migrated with their family to Houston. Garcia grew up there and considers it home; when I first asked them where they were from, they said, “I’m originally from Houston. I mean, Mexico City.”

Last summer, Garcia and their mother moved to Jackson, Wyoming, where Garcia found part-time work at a ski resort and at a local grocery store. Garcia’s job at the resort, though, was cut after the resort closed to prevent the spread of the coronavirus, and while they were “fortunate enough” to keep the grocery store gig, the last month has become both physically and emotionally exhausting. Garcia told me that they try to remind themselves during their shifts that it’s important “to be alert, not anxious.”

Since Garcia first learned of COVID-19, the self-described “pathogens and microbiology nerd” started sharing information with coworkers at the grocery store. Sometimes it was news articles; other times it was memes, to keep things light. Then when cases started popping up nearby, they started to worry.

“I was less worried about myself, but I worried about my older coworkers, as well as my parents, and my customers, because a lot of them are elderly,” Garcia said. “So I immediately started sanitizing everything: the carts, the baskets, the handles, and everything else people touched every 10 minutes.”

Garcia feels proud of the work they do every day and told me they like the small town feel of Jackson and “how beautiful it is up here.” Still, Garcia admitted they have had customers “look at me from head to toe, and just completely be judgmental before. Right now, it definitely goes a long way to be nicer to (grocery store clerks), to just say a few kind words like, ‘Thank you for coming to work.'”

Lately, Garcia said, they’ve been thinking about the impending Supreme Court decision, and that has added to the stress of living through the pandemic. According to United We Dream’s Muñoz, DACA recipients across the country have been experiencing heightened anxiety—something they’ve been feeling on and off ever since Trump threatened to end DACA while on the campaign trail in 2016. As I wrote last year:

Immediately after Trump’s election, DACA recipients felt scared and confused by their uncertain future. They were particularly vulnerable to deportation in the event that Trump took away their status; the government already had all of their information. Many were also afraid for their undocumented family members, who were now also exposed.

In office, Trump turned the rhetoric down a bit, saying he would treat DACA recipients “with heart” and work with Congress on the matter, and that their information wouldn’t be sent to Immigration and Customs Enforcement. But in September 2017, the Trump administration announced it would cancel DACA. Courts quickly ruled that the administration did not have the authority to end DACA so abruptly and without adequate explanation, and the government was compelled to renew the program for those who had already been granted temporary protected status.

Since then lower courts have ruled against the Trump administration, saying his move was “arbitrary and capricious.” It’s been two years of limbo for DACA recipients. The Supreme Court heard arguments on whether the Department of Homeland Security’s decision to wind down DACA was lawful and judicially reviewable back in November. And now, it could come out with a decision as early as Monday.

Meanwhile, presidential candidate and former Vice President Joe Biden expressed support for DACA recipients last month, warning that if the Supreme Court sides with Trump, it “will leave a gaping hole in our health care system that is liable to cost American lives.” He added that Dreamers are ingrained in every aspect of our society and are “American in every way that matters.”

“It’s a false choice to think that in the middle of a pandemic we have to wait on the Supreme Court to potentially decide the fate of the hundreds of thousands of DACA recipients and their families,” Muñoz said. “Trump didn’t have to end DACA. That’s a choice he made, and he took it to the Supreme Court.”

“It’s a false choice to think that in the middle of a pandemic we have to wait on the Supreme Court to potentially decide the fate of the hundreds of thousands of DACA recipients and their families.”

If the looming possibility of a Supreme Court decision in the middle of the coronavirus pandemic weren’t enough, DACA holders learned Tuesday that the Department of Homeland Security had gone back on its promise to keep their personal information separate from Immigration and Customs Enforcement. As first reported by ProPublica, internal administration emails obtained under a lawsuit filed by Make the Road New York show that ICE already has their information and could access it if necessary.

I texted with Garcia after they heard the news Tuesday. They told me that their biggest fear had always been that they put their undocumented parents at risk by applying for DACA. Garcia’s parents don’t have protection, and when Garcia filled out DACA forms with US Citizenship and Immigration Services, they entered information about themselves but also about their parents. “Now knowing that ICE has that information,” they said, “it fills me with anger and an even bigger drive to keep fighting for my undocumented community.”

The timing of it all is horrible, Garcia told me, but they still feel privileged to even have qualified for DACA in the first place—especially when so many other essential workers during this pandemic are undocumented.

“I remember when I was still living in both of those closets. I didn’t know whether my family would love me being queer, or if my friends would love me being undocumented,” Garcia said. “With all the support that I’ve had from so many people who have loved me and accept me as both queer and undocumented, it’d be hard if I would ever have to say goodbye to them.”