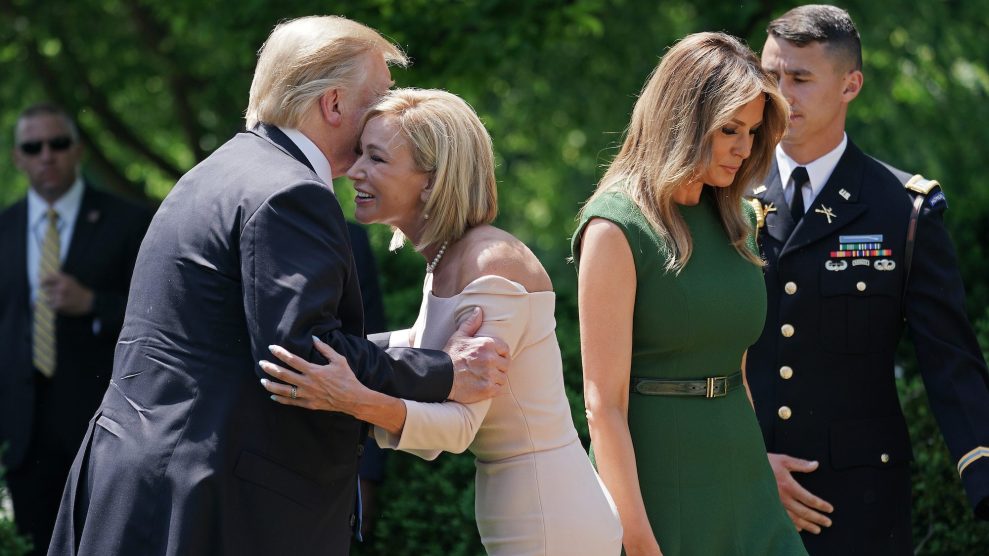 On Tuesday, Treasury Secretary Steve Mnuchin warned senators that the outbreak of Covid-19, the disease caused by the coronavirus, and the massive recession that likely will take place might cause the unemployment rate to balloon to 20 percent. (He later walked back that dire prediction.) The same day, the president’s spiritual adviser, Paula White asked her followers for private donations to bankroll her private church, which she described as a “hospital to the sick”—the metaphysically sick, that is.

Since October, White has served as the special adviser to the Center for Faith and Opportunity Initiatives in the Trump Administration. During a coronavirus-themed “prayer session” that she delivered to her online congregation, she conflated the coronavirus outbreak—a quickly-spreading pandemic which has infected more than 6,000 Americans and by Wednesday had killed 146—with the fundraising needs of the City of Destiny, an Apokpa, Florida, church in which she holds a prominent position.

Trump's "spiritual adviser" (and head of the White House's "Faith and Opportunity Initiative" program) Paula White asked for cash during a coronavirus-related prayer session this afternoon.

"Maybe you’d like to sow a $91 seed… Or maybe $9. Or whatever God tells you to do." pic.twitter.com/zUoeufRhda

Though she clarified that donations wouldn’t actually go to help those infected, White used medical imagery to add urgency to her fundraising plea during a pandemic. “Every single day we are a hospital to the sick, not necessarily the physically sick,” she said. “But we are a hospital for those who are soul sick, those who are spiritually sick.” White went on to suggest that contributors offer a $91 donation, citing Psalm 91, or “maybe $9 or whatever God tells you to do.”

White’s career as a religious figure has long featured the solicitation of money from followers in exchange for her intervention in expediting their access to God—money that has gone on to finance her lucrative lifestyle. As Mother Jones’ Stephanie Mencimer reported in February:

“A Senate report found that White’s personal ministry and the church she ran with her now ex-husband used tax-exempt ministry funds to pay nearly $900,000 one year for the Whites’ waterfront mansion. It paid over a million dollars in salaries to family members and kept the Whites in the air with a private jet. White and her church refused to cooperate with the investigation and in 2011, Sen. Charles Grassley (R-Iowa), issued a report outlining the committee’s findings but took no other action.”

Now from Trump’s pulpit—a ripe opportunity for more lucrative gains—White’s financial requests are more visible than ever. Plus, they’re wrapped in the implicit endorsement by the president by virtue of her close association to him. As Mencimer wrote:

The melding of White’s public and private jobs is nearly seamless, as she invokes her relationship with Trump in her sermons and fundraising pitches, even as she wields her spiritual authority to defend the president. But experts say the arrangement raises significant conflict of interest questions, concerns about her compliance with tax laws banning nonprofit churches from endorsing candidates. And there’s the more fundamental question as to whether by installing her in a White House job, Trump has put the government’s stamp of approval on a religious ministry that includes faith healing and preying on vulnerable people for money.

One thing is clear: The donations that White is soliciting won’t be heading towards the real hospitals serving those in need at the frontline of the coronavirus pandemic.