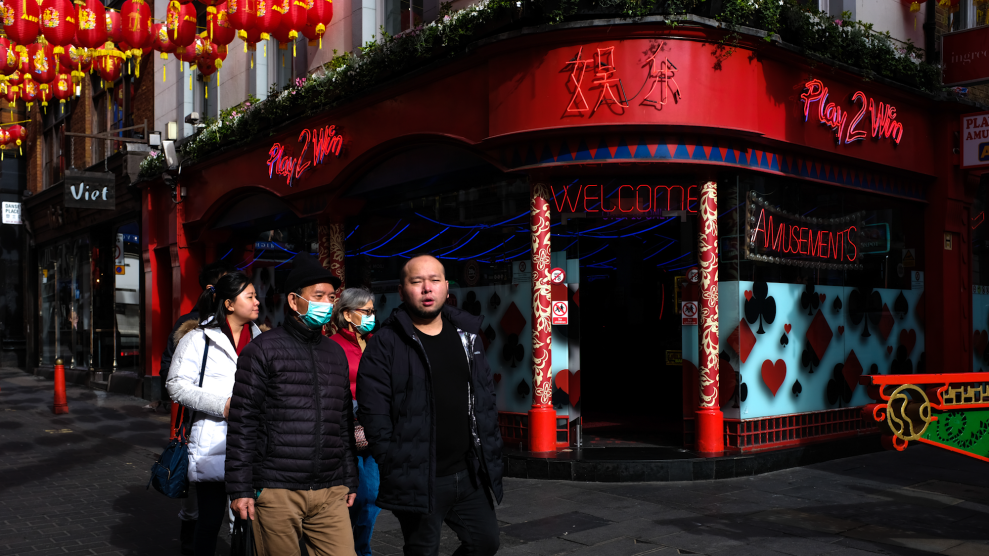 People walk in the streets of central London wearing face masks, London on March 2, 2019. The spread of coronavirus in the UK is ‘likely’, the PM has said, but a plan has been agreed to tackle it. It comes as the number of cases in the UK rose by four to 40 on Monday.Alberto Pezzali/ZUMA

The weekday lunch hour in London’s Chinatown is usually brimming with crowds. But earlier this week, as the United Kingdom warned that more outbreaks of the coronavirus epidemic were inevitable, the once-reliable mix of tourists and city residents strolling through Gerrard Steet had been largely replaced by an empty corridor of Asian restaurants. The business owners I spoke to said it had been roughly six weeks of more of the same hushed scene.

“A London man put his leg out to stop and ask me, ‘Do you like Chinese bat soup?'”

Ahead of the BBC’s special on the virus this week, Sam Phan had hoped that xenophobia toward Britain’s Asian population would get a rare moment in the national spotlight.

It’s a critical issue for the 23-year-old University of Manchester graduate student, who last month penned a Guardian op-ed detailing the hostile environment the virus has created for him and other Asians living in the United Kingdom. It was also one of immediate concern when we spoke on Monday after Phan said that he had just been targeted by another round of coronavirus-related racial abuse while riding the train from London to Birmingham last weekend.

“I was making my way through a busy train when a man suddenly lifted his arm at me and said, ‘Don’t give the coronavirus,'” Phan, a British citizen who was born in Vietnam, told me. “Literally two minutes before that even happened, a London man put his leg out to stop and ask me, “Do you like Chinese bat soup?”

But with a tight, 30-minute time frame dedicated to more pressing public health concerns, racism in light of the coronavirus was ultimately left out of Monday’s panel discussion. Prime Minister Boris Johnson, who appeared on the BBC special without addressing the rise in racist attacks, failed to do so again during his emergency press conference Tuesday.

The lack of official condemnation is likely to come as a missed opportunity for many Asians living in the UK—a group that in 2017 reported the country’s highest level of racial harassment—not just to address the current surge in discrimination, but also tackle what both anecdotal evidence and research have long described as a serious but hidden and underreported problem in British society, especially for the UK’s Chinese population.

Curious about the role of xenophobia playing out in London’s Chinatown, I ventured to the neighborhood in hopes to chat with business owners about business in the time of coronavirus. But the restaurant and shop owners I spoke to were largely reluctant, even frustrated, to speak about the coronavirus’s effect on the neighborhood out of concern that increased media attention has only exasperated the situation, and thus their profit margins. Some blamed the weather and post-holiday shopping season for the dip in foot traffic. As for whether racism was playing a role in people’s fears, the people I spoke to were quick to deny that it had been a factor.

The hesitation to call out racism isn’t exactly surprising. It’s a common reaction from business owners to deny that social factors have an effect on their business, for fear of actually encouraging that line of thinking. In the case of the Chinese community in the UK, a study found that the community is prone to underreporting incidents of racially motivated attacks because of a significant lack of confidence in the police.

“The guy who tried to kick me then said, ‘I don’t want your coronavirus in my country.'”

But that may no longer be a tenable response, particularly as more people go public with allegations of assault amid the coronavirus epidemic. The newest one to grab widespread media attention both in the UK and abroad emerged on Tuesday when a 23-year-old Singaporean student studying in London posted a graphic image of his alleged attack on Facebook.

“All of a sudden, the first punch was swung at my face and took me by surprise,” Mok wrote. “When I was still shocked by the first hit, the guy delivered the second sucker punch…The guy who tried to kick me then said, ‘I don’t want your coronavirus in my country,’ before swinging another sucker punch at me, which resulted in my face exploding with blood.”

“I’ve studied in London for the past 2 years and every year, I am subjected to racist remarks (whether innocent or made with malice). To those people who told me London isn’t racist, think again.”

“In Britain, we like to say that racism is an American thing,” Phan said. “But I feel like there are a lot of things that we need to have more conversations around now, especially the racism that happens toward East Asians and bring it into the spotlight.”