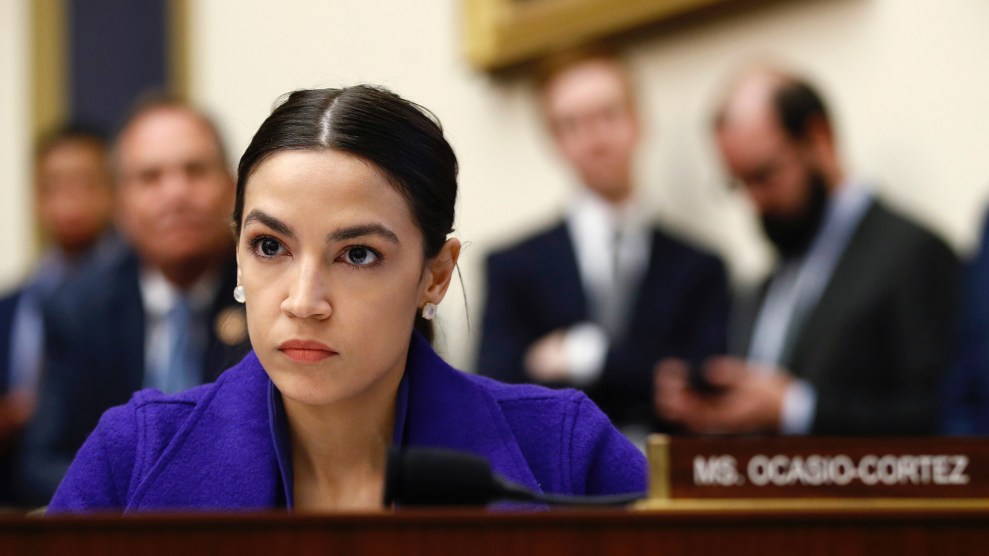 When I reached Sara Nelson on Wednesday morning, there was an anxious sharpness to her usual no-nonsense delivery. The president of the Association of Flight Attendants—a major figure in organized labor, who is expected by many to someday helm the AFL-CIO—has been living with the gravity of a global pandemic for much longer than most Americans. “We started working on this issue in January,” Nelson tells me, explaining that airlines’ pulldown of Asia-bound flights during that time immediately slowed her industry’s cash flow. “If we don’t get this relief right now, the airlines are going to run out of the ability to provide payroll in two months, if not sooner.”

Now, Nelson is seeking a bailout for the airline industry. But don’t call it that, she says, and if she gets her way it wouldn’t follow any of the contours of what banks and other industries received in the wake of the 2008 financial crisis. She wants federal relief for the airline industry to go directly into the pockets of its employees; alongside it, she wants a ban on stock buybacks, dividends, and executive bonuses, as well as strengthened union protections that don’t allow corporations to use any government money to “limp along until they file for bankruptcy.”

Nelson has been in close contact with fellow union leaders in the retail and hospitality industries who are hopeful that her union’s asks can be a model for other sectors that find themselves similarly cash-strapped during the pandemic. “We have experienced a crisis like this before, and we know that the people with money in control will try to make a crisis work for them,” she says. “If you keep the paychecks going for workers, they can help themselves.”

For the last week, industry CEOs and their lobbying arms have been parading in and out of the Oval Office to express worry about what the sudden demand shock of the COVID-19 crisis has done to their bottom lines. Airports have asked for $10 billion, and public transportation officials estimate they’ll need $13 billion. The hotel industry seeks a whopping $150 billion, and the head of the US Travel Association thinks the travel industry as a whole needs $100 billion on top of that. On Wednesday, the Washington Post reported that the Treasury Department was eyeing an estimated $200 billion to prop up the airlines and various sectors of the travel industry.

“We have experienced a crisis like this before, and we know that the people with money in control will try to make a crisis work for them.”

These recent scenes at the White House bear heavy similarity to the wake of the 2008 financial collapse, when the banks received massive sums of taxpayer-funded rescue money, and have already drawn the watchful eye of progressive lawmakers. Rep. Alexandria Ocasio-Cortez (D-N.Y.) tweeted that “[i]f there is so much as a DIME of corporate bailout money in the next relief package, it should include a reinstated ban on stock buybacks,” the practice of using a company’s liquid cash to repurchase shares, which typically benefits executives and wealthy investors. Sen. Elizabeth Warren (D-Mass.) told her Twitter followers that Congress is “not writing blank checks to giant corporations” and shared a list of demands for any company that receives federal money in the coming weeks, including a requirement to keep employees on payroll and the need for a congressional oversight body modeled on the panel she served on in the aftermath of the 2008 crisis.

If progressives can’t stop history from rhyming, they’re determined to stop it from repeating: If there will be money given to save industries, it will have strings attached. “People need to be prepared to learn the lessons of the past to resist these bailouts,” says Andy Green, the managing director at the left-leaning Center for American Progress, who worked as a staffer on the Senate Banking committee during the 2009 recovery.

The downsides to the last major bailout were already in the news this year thanks to the 2020 Democratic primary. Warren premised much of her campaign on that point; she said “Washington has showered big banks with favors” and released regulatory proposals that made banks fear her candidacy. In nearly every stump speech, Bernie Sanders offered a variation on this theme: “The American people bailed out Wall Street. Now, it is time for Wall Street to come to the aid of the middle class.” And last week, when rumors percolated that the Trump administration would seek a cash infusion for the oil industry to compensate for market downturns, progressives preemptively objected. “Not only is he trying to focus on corporations and, really, corporate interests, but also doing things that are illogical, like trying to bail out [the] oil industry that you know are completely unrelated,” Rep. Mark Pocan (D-Wisc.), a co-chair of the Congressional Progressive Caucus, told Buzzfeed, comparing the idea to the 2008 crisis.

It wasn’t necessarily that simple. The banks truly were too big to fail, says Amanda Fischer, the policy director for the Washington Center for Equitable Growth, a progressive think tank, who also worked for the House’s Financial Services committee during the ‘08 crisis. Their failure could have deepened the recession, and rescuing them was the only thing to do. “What I think is wrong is how we did it—how we mediated the aid through the banks instead of immediately helping families,” Fischer tells me. “And we did not accomplish enough structural reform to address root causes like inequality, so we walk into the next recession having repeated the same mistakes.”

“There has to be a better way than draining the company of its money in good times, but asking the taxpayer for money in hard times.”

Fischer says that the lack of structural reforms is what’s at the root of the economic woes the pandemic has brought upon travel- and transportation-heavy industries. She points to a May 2019 credit analysis of American Airlines—the most recent one available—that calls the airline “one of the highest-leveraged…because of its heavy reliance on debt for repurchasing its shares.” The analysis notes a company policy of repurchasing shares when its cash on hand reaches $7 billion, leaving American a small cushion to deal with hard times.

The practice is industry-wide: US airlines spent 96 percent of their cash profits on stock buybacks, according to Bloomberg. Thanks to the Trump tax cuts, which left businesses flush with cash, corporate buybacks across the US economy reached a record high in 2018. “The private sector received a massive bailout in the form of Trump tax cuts in 2017 and deserve zero of a bailout right now,” Green says.

“American Airlines isn’t to blame for the pandemic, but the fact that they have been looting the company with buybacks and now have a weaker cushion against loss—the blame’s on them for that,” Fischer says. “There has to be a better way than draining the company of its money in good times, but asking the taxpayer for money in hard times.” (In addition to federal assistance, American American airlines is also currently asking banks for a year-long, multi-billion-dollar loan.)

This isn’t to say that money shouldn’t go directly to the companies themselves. The progressive economists, experts, and activists I spoke with are skeptical of the one-time payments of $1,000 or more that the White House and lawmakers of both parties have proposed. AFA’s Nelson argues that the practice would increase inequity between salaried and hourly wage people, and that it would be better to maintain the income people already receive. “When people have jobs, that also gives them health care,” she adds, “and the government then reduces the number of people it would otherwise have to care for in another way.”

So they argue that money should be funneled to industries—but it should go directly to help workers whose incomes are now in jeopardy. CAP’s Green says there are some decent takeaways from the 2008 bailout of the American automotive industry, which included provisions that strengthened union protections. He adds that there should be strict limits on “golden parachutes”—the cushy packages given to corporate executives in the case of company mergers or takeovers—and executive bonuses. Fischer says it’s also the time to make those structural changes the pandemic has revealed. At a House Democratic caucus meeting last week, her colleagues Jason Furman and Claudia Sahm* presented lawmakers with a series of recession-ready “automatic stabilizer” reforms that would inject money into the economy in a downturn and withdraw it once it stabilizes.

There’s no guarantee that anything too bold will make its way to the president’s desk, however. Bills to spend money must originate in the House, where the ruling Democratic Party has shown little appetite to repeat mistakes from 2008. A spokesperson for House Speaker Nancy Pelosi told Politico that “protecting workers’ paychecks and benefits” has been her top priority in negotiations she’s had with Treasury Secretary Steve Mnuchin. At the same time, the desire to make grand structural changes beyond the scope of emergency relief money seems limited to the House’s most progressive members, who do not have powerful leadership positions, where many of these decisions are being made. And, of course, anything would also have to pass the GOP-held Senate and get the White House’s approval.

*This story has been corrected to reflect the fact that Claudia Sahm, Washington Center for Equitable Growth’s director of macroeconomic policy—not Fischer—presented at the House Democratic caucus meeting last week.