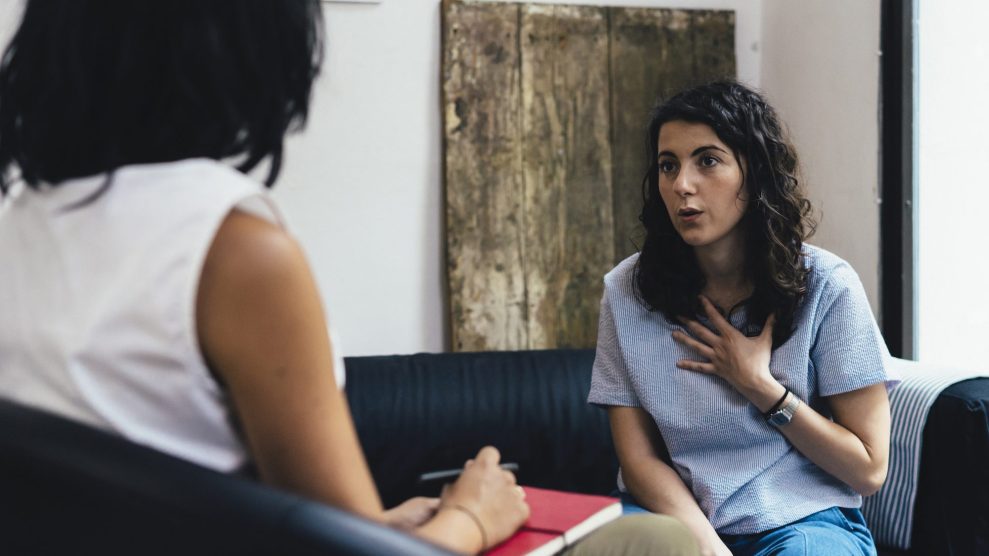 When psychologist Dr. Mary Alvord speaks with her patients about their coronavirus concerns at her practice in Rockville, Maryland—where the governor confirmed a state of emergency after three cases were reported—or when she scrolls through social media with posts often filled with misinformation, she keeps thinking back to another time when she experienced a similar level of widespread fear. Not during the SARS epidemic in 2003, but in 2002 during a three-week stretch when a series random shootings across the Washington, DC, metro area killed ten people and left the capital and surrounding communities in paralyzed by concerns over the DC sniper.

Worry about the random attacks was widespread, but Alvord, whose practice specializes in anxiety disorders, recalls that it was her “anxious patients [who] were reacting in the most extreme ways.” Some patients would begin to spiral, making irrational, ultimately self-defeating decisions. “They would run out of gas because they were afraid of going to gas stations,” threatened by the prospect of momentary exposure to sniper attacks, she recalls. Those with the most severe anxiety disorders wouldn’t even leave their homes. Now, she sees some of the same extreme symptoms among other patients.

Though a sniper attack and the coronavirus might appear to have little in common, Alvord sees a number of similarities in the reactions of some of her patients and in the sensationalist tone on social media. The overwhelming message is that everyone is powerless in the face of an ominous and invisible threat that could arbitrarily strike anywhere or anyone. That powerlessness morphs into a set of common symptoms: imaging worst outcomes or “catastrophizing,” helplessly fixating on the coronavirus, or, at the other extreme, blocking it out completely, which means ignoring even basic precautions like hand washing.

The many versions of fear that Alvord describes aren’t limited to anecdotes from her office or her Twitter feed. Newly available data reveals that Americans suffering from anxiety disorders are experiencing more and often debilitating symptoms in response to news about the coronavirus pandemic. Interestingly, for other disorders, such as bi-polar disorder or PTSD, the data does not show a similar spike in symptoms.

In 2014, Mental Health America, a non-profit devoted to increasing awareness of mental illness, posted on its website nine questionnaires that are identical to the ones used by medical professionals when they screen for a diagnosis. They wanted to give those who took the survey an opportunity to see if they exhibited symptoms of various mental disorders, like anxiety, PTSD, and bipolar disorder. Since then, more than 5 million individuals have taken the test, averaging close to three thousand per day. And while the screens are anonymous, MHA tracks the answers and volume of submissions, along with volunteer demographic data. The result is a six-year data set on the nation’s mental health seeking population, a group MHA president Paul Gionfriddo defines as “people who are concerned about a particular mental health condition.”

When Gionfriddo and his colleagues isolated data from February of this year, the period during which the coronavirus caught the world’s attention, they were shocked. The rate of anxiety screens taken increased significantly between the beginning and end of the month—from 4,213 to 5,013, a 19 percent increase. Even after combing through past years of data, “We struggled to find any event that would be comparable,” he says.

“The worry of the virus became real for everyone in the second half of the month.”

There were still variables that needed to be ruled out—for example the volatility of the financial sector. MHA staff looked at their data from November and December of 2018, the last time the market tumbled. They found that screen rates, the number of people who took the tests, remained the same or dropped. “The worry of the virus became real for everyone in the second half of the month,” he says. “When it wasn’t real in the first half.” The anxiety screen is the only MHA test that saw an increase in traffic in February. The screening rate for other disorders like PTSD, psychosis, and bipolar disorder remained consistent with previous time periods.

Significantly, according to demographic data, two thirds of screen takers have never sought out a medical professional for a diagnosis. That means a considerable amount of the mental health fallout of coronavirus may be suffered entirely outside of clinical settings, where healthcare professionals like Dr. Alvord can’t reach them. Even if mental health experts aren’t seeing these patients, they’re aware of the debilitating effects they could be experiencing. According to Dr. Andrew Kuller, a clinical psychologist at Boston’s Harvard-affiliated McLean Hospital, severe OCD and anxiety symptoms can be “very debilitating.” With some OCD cases, he says “People have trouble doing anything but washing hands every minute they’re awake,” putting a stop to all other activities crucial to maintaining their daily lives.

As for the patients Kuller does see, he acknowledges that those with OCD and anxiety are expressing concerns, but fortunately “the actual threat [for them] is still kind of remote at this point.” But for those who aren’t receiving services, who may be concerned about their mental health, Kuller notes, “If you’re not sure if you can cope with the coronavirus or your symptoms, seek help.”

Dawn Brown is the helpline director for the National Alliance on Mental Illness, an organization that functions as a switchboard operator at the nexus of mental health resources and individuals seeking help. She has seen a spike in phone calls to the organization. Line operators have expected higher volume, Brown says, which occurs with every natural disaster or celebrity death. “It’s not going to get better before it gets worse,” she says.

I asked Brown about who might be most vulnerable to more intense symptoms during this time. Those with OCD and anxiety, she said, and also those who suffer from schizophrenia and bipolar disorder. “They are at greater risk of acquiring the virus, as well as having poor outcomes,” Brown says. “They’re often over-represented in the homeless population or have unstable housing. Also incarcerated people because they lack treatment facilitates.”  (My colleague Nathalie Baptiste recently reported on this.) The close proximity those populations find themselves in make a “perfect storm” for coronavirus spread. When it comes to immediate steps to address severe vulnerability, Brown echoes Kuller: Seek help.

This is a time when general anxiety is heightened, and one key in addressing it is to be clear about the nature of the danger; staying informed with updates from verifiable sources, like the CDC, can help contextualize individual vulnerability. “Let’s stay reasonable,” Alvord says. “Take precautions as we can, but we have to manage uncertainty. There’s a lot of uncertainty in life in general. The more we can tolerate, the better off we’ll be.”