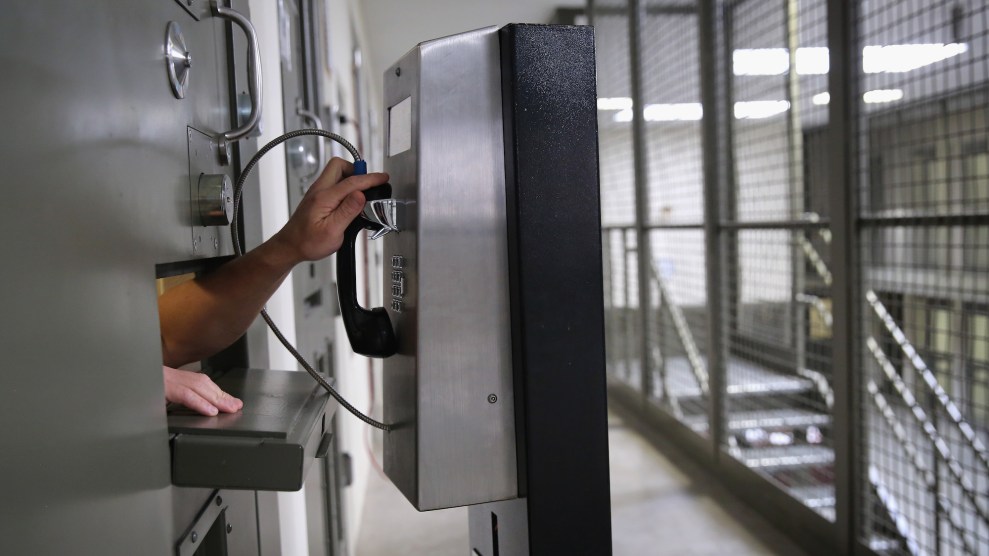 A person being detained by Immigration and Customs Enforcement makes a phone while being held in a "segregation cell" at a for-profit detention center run by GEO Group.John Moore/Getty

Civil rights groups are suing the Trump administration to force it to release people from immigration jails as the coronavirus outbreak continues to spread across the country.

In an emergency motion filed on Tuesday, the Southern Poverty Law Center and American Civil Liberties Union of Louisiana requested that a federal judge require Immigration and Customs Enforcement to release asylum seekers from detention centers in the Deep South if they don’t pose a threat to public safety or a flight risk.

Among the people identified in the lawsuit as particularly vulnerable to COVID-19 are a Cuban breast cancer survivor and a Venezuelan man who is HIV-positive. “Class members risked their lives to escape persecution and torture in their home countries,” the lawsuit states. “These asylum-seekers now find themselves trapped in what has essentially become a ticking-timebomb and, for many, a tomb.”

For weeks, health and corrections experts have called on ICE to release people from detention who don’t pose a threat to public safety. The agency has refused to do so. Instead, the number of people in its custody increased by more than 700 between March 14 and March 21, rising to more than 38,000 people in total. To date, ICE’s website listed four cases of detainees testing positive for COVID-19, but there are likely more people in its custody who’ve contracted the virus; the agency had only tested 25 people as of last Wednesday.

Tensions have been rising within detention centers as immigrants and asylum seekers fearful of being infected push for their release. Last week, there were several incidents in which detainees were pepper-sprayed at facilities owned by GEO Group, a for-profit private prison company that contracts with ICE. On Monday, guards used “pepper balls” against 23 detainees at GEO Group’s LaSalle ICE Processing Center, according to a government report obtained by BuzzFeed News. The San Antonio Express-News reported that the same day, about 60 people were pepper-sprayed at another GEO Group immigration detention center, this one in Texas, after they demanded to be released to protect them from the virus.

As I previously reported, on Tuesday guards pepper-sprayed at least seven men at GEO Group’s Pine Prairie, Louisiana, detention center, then transferred them to isolation cells. And I reported that the following day, officials at the LaSalle ICE Processing Center, also in Louisiana, pepper-sprayed women during a briefing on COVID-19. There were nearly 80 people in the room at the time. One of them told her lawyer that detention center staff left them locked up for about an hour as they screamed for help.

On Tuesday morning, Yoneli Figueredo-Pollato, a 34-year-old Cuban asylum seeker, called me to say he remains on a hunger strike that began after he was pepper-sprayed at Pine Prairie a week ago. After initially being sent to solitary confinement, he said he’d been transferred to the medical unit.  When I asked in Spanish how he was feeling, he replied with one word: “Weak.”

The lawsuit could force the release of asylum seekers in the five states managed by ICE’s New Orleans field office: Alabama, Arkansas, Louisiana, Mississippi, and Tennessee. Most of those asylum seekers are in Louisiana, home to one of the nation’s worst COVID-19 outbreaks. On Saturday, Patrick Jones, who was serving a drug sentence at a prison in Oakdale, Louisiana, became the first person to die of COVID-19 in the custody of the Federal Bureau of Prisons. The Oakdale prison is next to the Oakdale immigration court and is about 20 minutes away from from GEO Group’s Pine Prairie detention center.

Asylum seekers are being indefinitely detained in Louisiana because ICE has refused to release them on parole so they can live with relatives or other sponsors. Monday’s emergency request for a preliminary injunction is part of ongoing litigation about parole denials before federal Judge James Boasberg. As I reported earlier this month:

Last year, the SPLC and the ACLU of Louisiana sued the Trump administration after it started ignoring ICE’s parole policy at a sixth field office in New Orleans. The office, which covers five southern states, had approved 75 percent of parole applications in 2016. By 2019, it was approving none. “Defendants offer absolutely no explanation for the precipitous nosedive in the parole-grant rates issued by an Office that has allegedly preserved the same underlying policy for making those decisions all along,” Boasberg ruled in a September decision that forces the New Orleans office to follow the parole policy.

In a declaration supporting the new request, R.P.H., a 50-year-old Cuban woman detained at a GEO Group facility in Basile, Louisiana, explained that she had a mastectomy and survived 16 cycles of radiation treatment before seeking asylum in the United States. The lawsuit states that she “is critically vulnerable to COVID-19 because of her weakened immune system, history of recurring cancer, and the conditions of confinement at South Louisiana, including inadequate medical care.”

R.P.H. has been detained since entering the United States at an official port of entry last July. ICE has declined to release her on parole three times, and agents have told her she’ll only be allowed out if her cancer returns, according to the declaration. “Despite my medical history, I arrived at South Louisiana strong and in good health,” she said. “I have been sick more times than I can keep track of in this facility.” R.P.H. described the sanitary conditions in her 50-person dorm as “horrendous,” explaining that there isn’t access to hand sanitizer, disinfectant wipes, masks, and gloves.

Social distancing is also impossible there. In the declaration, R.P.H. explained that women from another dorm at the facility have been moved into hers. They were previously quarantined because of what other detainees have told me was an outbreak of the H1N1 flu. Now that the once-quarantined dorm has moved, there are 72 people in one dorm.

If released, R.P.H plans to live with relatives in Florida who are US citizens, while fighting her case from outside detention. Her declaration ends on an ominous note: “I hope I live to see that day.”