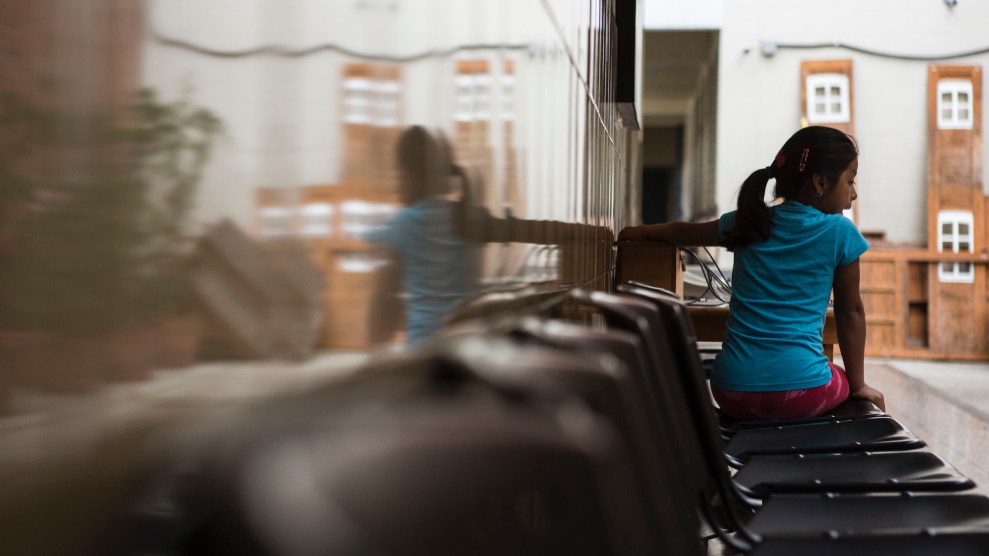 A Salvadoran girl waits for food at a migrant shelter in Guatemala City in July. The US is forcing hundreds of Salvadorans and Hondurans to seek asylum in Guatemala.Oliver de Ros/AP

Former Guatemalan attorney general Thelma Aldana fled to the United States after prosecuting rampant corruption at the highest levels of her country’s government. On Monday, Aldana announced she’d been granted asylum in the United States.

Also on Monday, the United States flew asylum seekers from Texas to Guatemala City to force them to seek protection in…Guatemala.

The juxtaposition captures the absurdity of a new arrangement—known as a “safe third country” agreement, under the assumption that the destination can provide security to people fleeing prosecution—under which Central Americans stopped at the US-Mexico border have to ask Guatemala for asylum. A country unsafe for a former attorney general is now tasked with providing refuge to some of the region’s most vulnerable people. Since the first flight in November, the Trump administration has sent more than 700 Hondurans and Salvadorans to Guatemala, about 75 percent of whom are women and children.

The agreement is part of a patchwork of policies established last year that have effectively ended asylum at the southern US border. Immigrant advocacy groups are suing to try to stop the flights to Guatemala.

To understand what the US-Guatemala agreement looks like in practice, I spoke with Charanya Krishnaswami, the advocacy director for the Americas at Amnesty International USA. Krishnaswami returned last week from Guatemala City, where she met with Central Americans who had been sent there. The interview has been edited for length and clarity.

Mother Jones: Tell me about the president’s agreement that brought you to Guatemala.

Charanya Krishnaswami: The so-called asylum cooperative agreements—which we’re calling “unsafe third country” agreements because that is in fact what they are—are new agreements the Trump administration inked with Guatemala, El Salvador, and Honduras last year, under which asylum seekers seeking protection at the Mexico-US border can be sent to any one of those countries to have their asylum cases decided there.

It’s important to note there is no requirement that individuals actually need to have been in those countries at any time. These agreements would theoretically empower the US to send anyone to any one of these countries. The only agreement that is in effect is the agreement with Guatemala. The asylum seekers being sent back are from Honduras and El Salvador, although there were very real rumors that the US government would start trying to send Mexicans seeking protection at our border to Guatemala. That hasn’t yet materialized.

MJ: Are vulnerable populations being exempted?

CK: Something that has really astonished me is the large number of women and children who have been returned under the agreement. When I had the opportunity to meet with people who had been transferred under the agreement, almost everyone I spoke to was a mother with a child—including a child who had a broken arm, a woman who was pregnant. We know that individuals who identify as LGBTI have been sent back, even though Guatemala has recently passed laws that make it very difficult for NGOs that help LGBTI individuals to freely operate.

When I asked a shelter operator whether he had noticed anybody who was particularly vulnerable who had been sent back, he responded simply, “Everybody is in a serious state of vulnerability.”

MJ: Before people are sent to Guatemala, what does their time in US Customs and Border Protection custody look like?

I spoke to one woman who just burst into tears when I asked her, “What were the conditions like where they held you?” She just started to cry. She said, “That was the worst nightmare of my life. I’ve never been treated like that. It’s painful to even think about.” She told me about a holding cell that was incredibly cold, getting nothing more than a thin mylar blanket and a thin mattress to sleep on. Being separated from her child, who was kept in a different cell. Having the lights on 24 hours a day and no windows. She had no idea whether it was day or night. Being treated horribly by the guards who were stationed in the facility.

MJ: What happens once they arrive in Guatemala?

I spoke to one woman who just burst into tears when I asked her, “What were the conditions like where they held you?” She said, “That was the worst nightmare of my life.”

CK: So asylum seekers are transferred on planes along with Guatemalans who are being deported. They’re all loaded on a bus and taken to an NGO where they receive their initial legal orientation. I spoke to several people who had no idea they were even going to Guatemala. It came as a total shock to them when they landed. Some of them thought that this was a layover and they were actually headed to their home countries.

They’re told by the Guatemalan government that they can apply for asylum, they can choose to “voluntarily” return to their country of origin with the assistance of the International Organization for Migration, or option three is sort of figure it out on your own. We heard from several different people involved in the process that they are told that they have 72 hours to make that decision, which can be really coercive in an environment where they’re just realizing they’re in Guatemala.

MJ: What did people say about what they were told by US officials before being flown to Guatemala?

CK: They use words like feeling that they had been “cheated” and “deceived” by US officials. One woman told me that the officer loading them on the plane said, “OK, you’re going to get on this plane to continue your process.” She said, “Don’t lie to me. What are we getting on the plane for?” And then the officer said that this is to deport you.

They’re just given very little information. I talked to other folks who did understand the possibility that they would be sent to Guatemala, and who specifically articulated that they didn’t want to go there and were nevertheless taken there.

MJ: What services are available to support people who are being sent there?

Fourteen people have sought asylum. About 25 had opted for this “voluntary” return. That leaves over 600 people who are entirely unaccounted for.

MJ: How many people being sent to Guatemala are applying for protection? And what do we know about what’s happening to the rest?

CK: That is the question that keeps me up at night. When I was there last week, about 650 people had been returned. The official numbers we got were that 14 people have sought asylum. About 25 had opted for this “voluntary” return. That leaves over 600 people who are entirely unaccounted for. We don’t know where they are. We don’t know if they’re going back to their countries of persecution. We don’t know if they’re trying to traverse the journey north again with all of the risks that that poses.

It’s just very unclear. It’s very scary, in part, because this agreement is so facially unlawful, so violative of both our domestic and international commitments. People who’ve been subjected to it—should a court ever rule that this agreement is unlawful, how are they made whole? How do we identify them to give them the opportunity to seek asylum in the United States under a fair process?