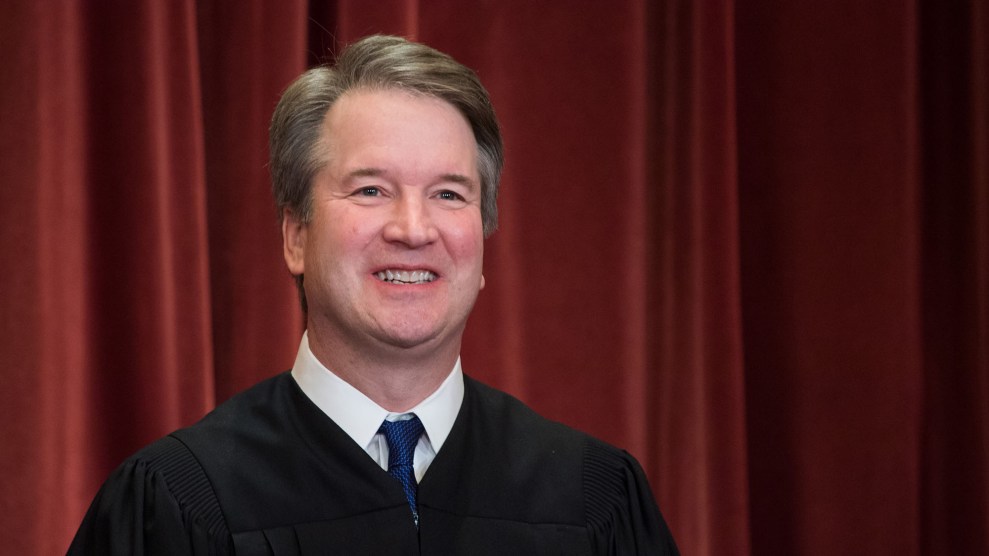 The bombshell allegation that President Donald Trump explicitly told his national security adviser that he would withhold military aid to coerce Ukraine into investigating the Bidens has sent Republicans scrambling for a new set of talking points. They quickly found one.

“This is Kavanaugh all over again,” Sen. John Barrasso (R-Wyo.) told reporters on Monday. Soon it was the company line.

The selective, last-minute leaks from Bolton's book are clearly an attempt to unfairly undermine the Senate trial.

But, ALL of the facts remain unchanged and uncontested.

It's the same (failed) playbook we saw from Democrats during the Kavanaugh hearings. pic.twitter.com/qkDJnxNJqZ

Barrasso, in his quest for a recent parallel, has stumbled upon a very good one—though not for the reasons he’d suggest.

Republicans are framing the revelation—from a book manuscript by former national security adviser John Bolton obtained by the New York Times—as a last-minute gimmick, a desperate attempt to change the rules of a game that’s already in progress. Bolton can’t be trusted, and besides, it’s way too late! The House had its chance to get Bolton on the record, the argument goes, and the Senate should not let the development sidetrack it from a case that’s already been laid out. Otherwise you risk losing control of the whole process and creating a partisan spectacle that needlessly tarnishes the reputation of a good man. (The good man, to be clear, is Donald Trump.)

This is, as Barrasso intimates, the basic story Republicans have told themselves about Brett Kavanaugh’s Supreme Court confirmation hearings for more than a year. Kavanaugh was on his way to confirmation when Christine Blasey Ford came forward to allege that he had sexually assaulted her when they were both teenagers in Washington, DC. Under pressure, the Republican-controlled Senate Judiciary Committee agreed to hold a new hearing to question Blasey Ford and Kavanaugh.

But the lesson of the Kavanaugh hearings wasn’t the effectiveness of Democratic gamesmanship; it was the power of stonewalling. Blasey Ford was unambiguous about what had happened (“indelible in the hippocampus is the laughter,” as she put it), and offered a roadmap for further investigation. But none of it mattered, because Senate Republicans did not want to know what had really happened. They were not interested in figuring out, definitively, whether their nominee for the Supreme Court had sexually assaulted someone, and whether he was lying about that or anything else (for instance: his drinking). They did not want to uncover information that would change their minds, so they constructed an elaborate public ritual to help them not find out.

Rather than get to the bottom of it, they lashed out and hunkered down. South Carolina Sen. Lindsey Graham’s famous tirade turned the latter half of the Kavanaugh hearing into a spectacle, and when the committee did agree to reopen an FBI background check into Kavanaugh, the result was an investigation in name only—an evidence-gathering process designed to prevent the collection of new evidence. As Slate’s Dahlia Lithwick wrote last year:

Kavanaugh is now installed for a lifetime at the highest court in the land. Ford is still unable to resume her life or work for fear of death threats. And the only thing the hearings resolved conclusively is that Senate Republicans couldn’t be bothered to figure out what happened that summer of 1982, or in the summers and jobs and weekends that followed. In the year-plus since, I have given many speeches in rooms full of women who still have no idea what actually happened in that hearing room that day, or why a parody of an FBI investigation was allowed to substitute for fact-finding, or why Debbie Ramirez and her Yale classmates were never even taken seriously, and why three books so far and two more books to come are doing the work of fact-finding that government couldn’t be bothered to undertake.

Maybe this isn’t quite Kavanaugh all over again. There’s still time for senators to call an audible. But Republican senators locking arms to block the examination of new evidence—while resting their entire case on the absence of such evidence? It sure sounds like a show we’ve seen before.