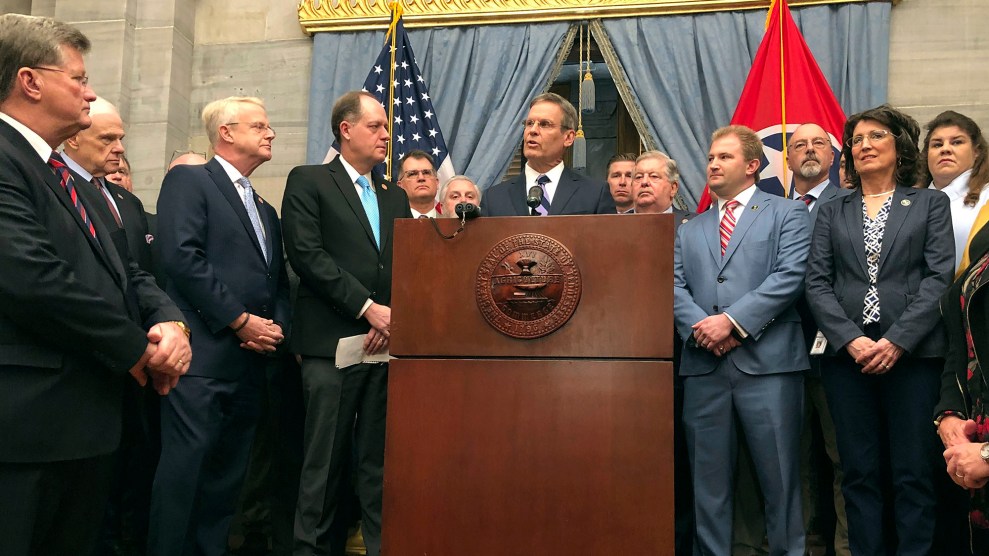 This morning, Republican Gov. Bill Lee called a press conference to announce that Tennessee would be doubling down on its commitment to make access to abortion in the state next to impossible.

The governor declared that he and his Republican colleagues would be bringing comprehensive abortion restrictions this session, including a so-called “fetal heartbeat bill” to ban abortion care once a “heartbeat” has been detected. To be clear, at that stage, this refers to a group of cells with electrical activity, not a fully-formed human cardiovascular system.

Tennessee already boasts strict anti-abortion legislation. Between a pregnant person’s initial appointment and abortion, the state mandates a 48-hour waiting period during which counseling must take place. The use of telemedicine is banned for medication abortions, and minors cannot receive abortion care without parental consent. In 2014, Tennessee passed a constitutional amendment—Amendment One—which says nothing in the state constitution guarantees the right to an abortion. It was challenged in court, but ultimately the state won, and it was upheld.

Add to this list the new restrictions that include a requirement that a person seeking an abortion be shown an ultrasound of the fetus, and a “reasons ban” that prohibits abortion based on fetal abnormality, Down Syndrome, race, or sex. According to the Guttmacher Institute, a reproductive rights-focused think tank, nine states ban abortion in cases where sex selection is a deciding factor. Two states have bans on abortions for reasons of race, and two states ban abortion in cases of fetal genetic anomaly. Three states have counseling requirements in cases where a pregnancy is being terminated for reasons of genetic anomaly. In its 2019 session, Tennessee introduced what is known as a trigger law—a bill to outlaw abortion in Tennessee should Roe be overturned in the Supreme Court—and it passed.

“We know that when a mother views her unborn child and hears a heartbeat, hearts and minds are changed,” Lee said of the ultrasound requirement, according to the Tennessean.

While the majority of the legislature is comprised mostly of strictly anti-abortion conservatives, over the past year, the Republicans have been split over how to handle anti-abortion legislation, particularly as a wave of abortion bans rippled through red states last spring. The debate has centered on the best way to execute such restrictions while avoiding the cost of the lengthy court battles necessary to defend such measures, and it came to a head last year, when the state was considering a different fetal heartbeat ban, which was eventually sent to a summer study in which the bill is researched and a hearing is held in a special session. It was set to be revisited this year.

“Passing a constitutionally suspect bill now would give the courts an opportunity to erase the progress we have made,” Republican Lt. Gov. Randy McNally said in a statement regarding the previous legislation last March, according to the Tennessean. “And a losing court fight would likely result in awarding taxpayer money to Planned Parenthood. Protection of the unborn is too important to risk taking a step backward.”

But the party seems to be rallying behind the new approach announced this morning, which includes a severability clause, which “will specify that if the heartbeat provision is struck down by the courts, bans on abortion will kick in at 8, 10, 12 weeks—up to the point where bans in other states have been upheld in court,” according to the Tennessean. What that means is Tennessee will pass whatever ban they can, which will depend upon what stands in the federal court systems; The upcoming Supreme Court case regarding abortion may affect how far they are able to go, as well. An exception for rape or incest is still being considered.

Also, it remains to be seen whether the bill will include exceptions for the mother's life, rape and incest. @LtGovMcNally calls that a "very difficult question" and says he has to think about it. #tnleg https://t.co/d2k6GN53YG

Now, however, McNally says he “wholeheartedly” supports the new legislation, according to the Tennessean. Given the united front presented by the governor and the lieutenant governor, the bill is likely to get farther than its predecessors and has a solid chance of becoming law this year.

“The destination has always been clear,” McNally said. “The issue has been identifying the proper vehicle. We now have the proper vehicle. This comprehensive, tiered approach is our best chance of advancing the cause of life without sacrificing the gains we have made.”

Abortion rights groups in the state are already rallying against the proposed restrictions.

“Our legislature has rejected paid family leave for all new parents, rejected federal money for affordable health care and child care, and rejected calls to stop shackling pregnant women in prison,” said Francie Hunt, executive director of Tennessee Advocates for Planned Parenthood. “The only thing our legislature cares about right now is forcing women to give birth, with no care for the consequences.”