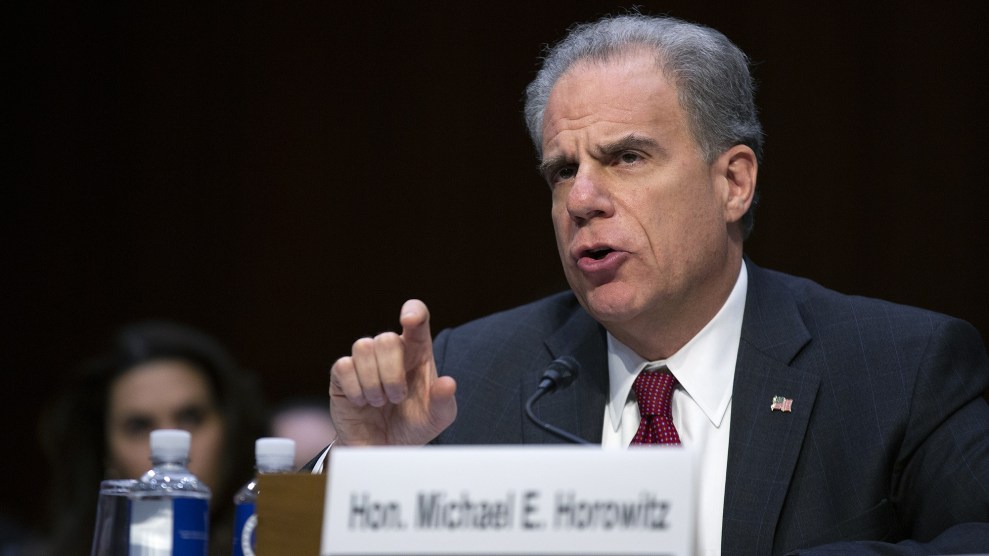 Michael Horowitz, Inspector General at the Department Of Justice, testifies before the Senate Judiciary Committee on December 11, 2019. Stefani Reynolds/CNP via ZUMA

The Justice Department’s internal watchdog, Inspector General Michael Horowitz, confirmed Wednesday that he is continuing to investigate FBI leaks that took place during the 2016 campaign that were motivated by anti-Hillary Clinton sentiment. Horowitz testified before a Senate panel on his report on the origins of the FBI’s investigation into contacts between the Trump campaign and Russia. While Horowitz did not find any anti-Trump bias in the inquiry’s launch, Trump has claimed the investigation was improperly opened in an attempt to hinder his presidential campaign. At the hearing, Republican lawmakers continued to push that mantle, while Democrats, meanwhile, highlighted an issue the public still doesn’t fully understand: How a faction of the FBI was involved in politically-motivated activity targeting their party’s 2016 presidential nominee.

During the 2016 election, the FBI’s New York field office was a hotbed of anti-Hillary Clinton bias. Officials there leaked to the press about the bureau’s investigations of Clinton, and multiple outlets have reported that Comey was concerned that they might disclose they had possession of a top Clinton aide’s laptop that had yet to be examined as part of the investigation into Clinton’s e-mails. Just two weeks before the election, Comey made his fateful decision to write to congress that the FBI had the laptop and would examine it as part of the Clinton email probe— a decision that harshly damaged Clinton’s election chances. Comey and other top FBI officials have testified to their concern about leaks in the New York office. Former FBI General Counsel James Baker told Horowitz last year that the leaks played into Comey’s decision to alert Congress—and the public—to the re-opening of the Clinton investigation. “We were quite confident that…somebody is going to leak this,” Baker said. “That we have all these emails. That, if we don’t put out a letter, somebody is going to leak it.”

In addition to leaking to the press, people in the office were leaking to individuals close to the Trump campaign, including Rudy Giuliani, now the president’s personal attorney. In October 2016, he boasted on Fox News about insider knowledge from the FBI field office, previewing “some pretty big surprises” that “you’re going to hear about in the next few days.” He later claimed he had no advance knowledge of the information that led to Comey’s announcement.

In a previous report, Horowitz documented extensive contacts between FBI officials and the media. And on Wednesday, he confirmed his investigation into leaks, including the New York field office leaks, is ongoing. But it’s not been easy. As Horowitz told the Senate Judiciary Committee, he has data showing calls between relevant FBI personnel and outsiders and reporters, but he has had trouble getting those FBI officials to share the substance of those contacts. “This continues to this day, we are investigating those contacts,” Horowitz said. “What’s proving to be very hard is to prove the actual substance of the communications between the agents and the reporters or the individuals, as you might guess.” He added, “But we can prove the contacts. And under FBI policy you need authorization if you are going to disclose information and have certain contacts.”

Horowitz says the IG's office is "very concerned" about leaks to Rudy Giuliani from the FBI's New York field office, and those contacts are being investigated https://t.co/QYeNW3Mzpx pic.twitter.com/hjZeNR6NMu

While Horowitz’s report did detail multiple errors on the part of FBI officials and agents in its Trump-Russia investigation, it did not find they were the result of any anti-Trump bias. Meanwhile, the actions of agents in the New York field office, a story that could reveal actual anti-Clinton bias within the FBI during the last presidential election, remain largely unknown.