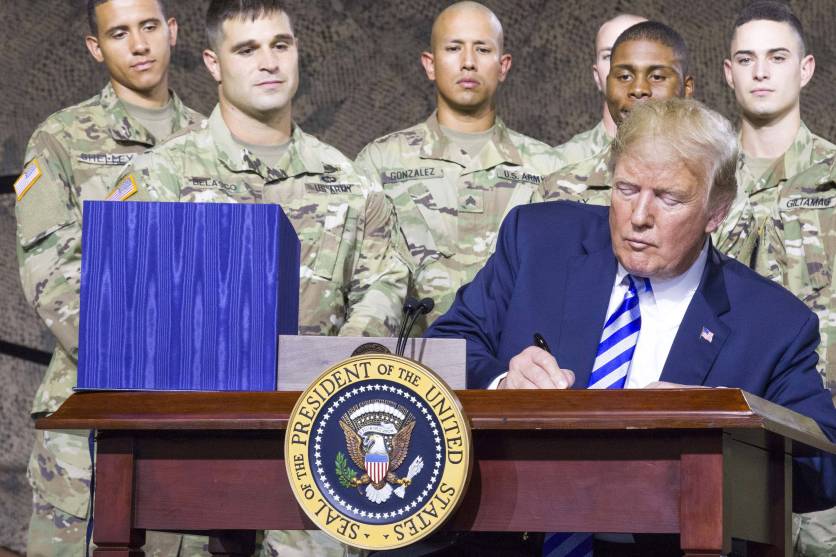 It’s the last official week of the 116th Congress, and lawmakers are running out of time to finalize a military budget for the fiscal year that began October 1. The House and Senate each passed a version of the annual National Defense Authorization Act, or NDAA, but after convening in September, the conference charged with resolving the differences made exceptionally slow progress. Currently funded by a bare-bones continuing resolution, the Pentagon is bracing to cut back on training, maintenance, and purchasing expenses, while a number of planned projects and reports have an uncertain future. The reason? Just as with last winter’s five-week government shutdown, it’s mostly because of President Donald Trump’s insistence on a wall on the US southern border that he believes can be paid for by diverting funds from the Pentagon.

Since 1961, Congress has been required to authorize all operations funded in the annual defense appropriations bill. Once a simple one-page resolution approving money for aircraft and missiles, recent NDAA’s have become swollen with hundreds of pages of directives and provisions, some of which are only tangential to national security. Such riders have been possible, at least for the last 58 years, because the NDAA usually passes with bipartisan support.

This year, however, the Republican-controlled Senate wants to defer to Trump’s repeated requests to use defense funds for the US-Mexico border wall, while House Armed Services Committee Chairman Adam Smith (D-Wash.) has said, “Any bill that does not restrict wall funding would be challenging to bring to the House floor.” The Senate passed a version of the NDAA that allocates $3.6 billion to “backfill” defense money already used to fund the wall through Trump’s emergency declaration in February, and authorizes a further $3.6 billion for the wall.

With the House impeachment process adding to the impasse, it has taken lawmakers until the very last minute to resolve the border wall issue, as well as the other differences between their two versions of the funding measure, before Congress is supposed to adjourn for the year on December 13. In an effort to move forward, Senate Armed Services Committee Chair Sen. James Inhofe (R-Okla.) introduced a “skinny” NDAA in late October that focuses on necessary construction projects, military pay raises, procurement of F-35 fighter jets, and continued funding of anti-ISIS operations, while neither authorizing nor restricting border wall funding.

As of Friday afternoon, the conference committee had reportedly finished their NDAA negotiations, but what this actually means is still unclear. The conference may have resolved these differences, but the bill’s new text has yet to be released, and Politico reports that some House Democrats are vowing to vote against it unless stronger language about PFAS chemicals is added back in. It remains to be seen which parts of the original House and Senate bills will be the casualties in this process. Here are some plans that could be scrapped in an effort to provide at least basic funding for Pentagon operations before the continuing resolution expires on December 20:

Trump’s Space Force may be put on hold.

Since 2018, Trump has called for a separate military service to defend US assets in space, but Congress has demurred on giving the Department of Defense unlimited authority to establish it. This is “the main point that will have real impact” if a full NDAA isn’t passed, says defense policy analyst Frederico Bartels from the conservative think tank the Heritage Foundation. The organization of US space efforts “will have impacts for competition among the great powers, [yet] that discussion has been left by the wayside.” Inhofe’s skinny bill omits the Space Force entirely, even though the House and Senate mostly agreed on its implementation—but the House wanted to call it the “Space Corps,” a new name that might mess with Trump’s 2020 merch.

Trans people could still be banned from serving in the military.

Following a 2017 Trump directive, most transgender people are currently barred from enlisting in the US Armed Forces. Trans people who were already serving have become vulnerable to possible discharge, and could be denied promotions or future re-enlistments. House Democrats amended this year’s NDAA to repeal those restrictions by requiring “gender-neutral” enlistment criteria, “regardless of the individual’s designated sex at birth.” Such a politicized amendment “is not good governance,” according to Bartels, but he admits that under better circumstances, the two parties would “negotiate on their differences.” Democrats might demand the trans ban be lifted in exchange for conceding on the border wall. The skinny bill is silent on the matter.

Toxic PFAS chemicals may continue to linger on bases.

For decades, the military has contaminated drinking water at home and abroad by extinguishing fires on bases with foams containing cancer-causing PFAS (per- and polyfluoroalkyl substances). The House and Senate both wanted the NDAA to address military PFAS pollution, but only the House bill would have added the chemicals to the EPA’s hazardous substances list, making the Pentagon liable for costly Superfund cleanups. Inhofe left PFAS out of his stripped-down bill, and on Friday, Politico reported that House Democrats were removing their stronger PFAS provisions in the interest of compromise. In October, 68 House Democrats and one Republican said they would not vote for an NDAA that doesn’t address the issue.

We could continue funding “baby nukes.”

Even the House Armed Forces Committee was divided over whether to reauthorize funding for a new low-yield, submarine-launched nuclear warhead called the W76-2. Chairman Smith said that defunding the project could prevent “some nitwit over at the Pentagon” from unnecessarily starting a nuclear war, while Rep. Liz Cheney (R-WY) argued that a denial was tantamount to nuclear disarmament. The House NDAA ultimately barred funding for “baby nukes,” while the Senate version and the skinny bill would leave a $30 million allocation in place.

There may be no new study of climate change—or several other issues.

Thanks to House Democrats, the NDAA passed in 2017 required the Department of Defense to list bases vulnerable to climate change. The DOD published its findings in January, but House Democrats were “deeply” unsatisfied with the quality of that report. In June, a Government Accountability Office study found that only one of 23 reviewed bases was prepared for projected climate impacts. This year’s House NDAA bill also demands more in-depth studies, and Congress would have the DOD report on dozens of other topics—like sexual assault and racial disparities in the military justice system—but the skinny bill stripped out nearly all of them. “Congress asks for a report when they want to raise concern,” says Abe Denmark, a  senior fellow at the non-partisan policy forum the Wilson Center. “They’re sending a signal to the Pentagon: ‘Stay on top of this, or we’ll get more involved.'”

Bases around the world could be affected.

The Senate version of the NDAA authorizes $226 million for Navy construction on Guam, part of a broader “Indo-Pacific” realignment that would involve moving thousands of US Marines from Japan to US territories. Noting “the pressing need” to reduce the Marines’ presence on Okinawa (a small Japanese island disproportionately burdened with US military bases and PFAS pollution), the Senate calls for a report on the planned move to Guam. The US military’s position in East Asia has become a more urgent concern with growing threats from North Korea and China, says Denmark, who notes that both the House and Senate wanted to prevent Trump from making good on a vow to pull troops out of South Korea through some action in the NDAA. But if we end up with a skinny NDAA or no NDAA at all, Denmark says, “national security strategy would be on autopilot.”

“There’s a historic tradition of having a bipartisan NDAA,” Bartels says, but “the chambers are way farther apart than they’ve been in the past.” He thinks Congressional leaders have wrested control of the authorization process by focusing on their own priorities. As for the border wall, Bartels observes, “You should not be dragging the military into that discussion. That was a political choice made by the current administration.”