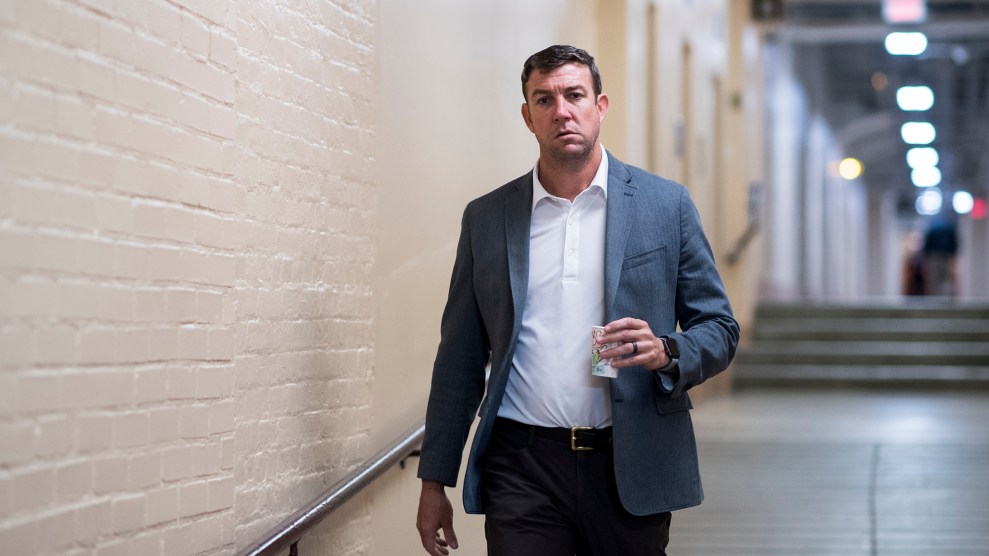 Rep. Duncan Hunter (R-Calif.) carrying a cup of coffee that he hopefully paid for with his own money.Photo By Bill Clark/CQ Roll Call

Rep. Duncan Hunter (R-golf course), a man so flagrantly crooked that his admission that he may have committed war crimes in Iraq was only a secondary political scandal, said Friday night that he is quitting Congress at the end of the holidays.

Hunter’s resignation follows his decision to plead guilty to allegedly misusing $250,000 in campaign funds; it is entirely unrelated to his having been part of a military unit that he said killed hundreds of civilians, “probably women and children.”

Hunter had received a letter on Thursday from the House Ethics Committee urging him not to vote on legislation. A House rule says members who face potential prison sentences of two or more years should refrain from voting.

Earlier this year, Bryan Schatz compiled for Mother Jones a comprehensive list of everything Hunter bought with that campaign money. Hunter’s resignation seems like a good occasion to revisit that list. You may already know about the endless rounds of golf and the $600 he spent on a flight for his pet rabbit, Eggburt, so we’re skipping those and going straight to the weirdest deep cuts.

—Thousands of dollars at a smattering of restaurants

Duncan Hunter has the palate of a child from a wealthy Dallas suburb. You’d think a guy who’s spending money that isn’t his would get creative if he’s using it on fancy dinners. You’d especially think that a guy wild enough to admit unbidden to killing civilians would have correspondingly wild taste. Hunter doesn’t. He almost exclusively eats at fancy steak houses and fancy seafood restaurants. The man dropped over $200 at Fado, an unremarkable Irish pub that’s a national chain. He loves expensive, national chains. His only deviations from American steak and seafood are pretty much just a couple of Latin American restaurants and Italian, too, if you count Olive Garden. If you’re putting it all on the line by being crooked, at least make it count. Go for the absolute gusto. Eat a raw puffin heart. Marinate a Kobe beef steak in Almas caviar, not even because it would be good but just to see what would happen. Use your power and influence to access a frozen supply of dodos that the mind-warpingly wealthy have secretly stashed away.

—In March 2015, Hunter’s wife, Margaret, who pleaded guilty to one count of conspiring with her husband to spend $25,000 in campaign funds for personal use, counseled Duncan to buy shorts “at a golf pro shop so that they could falsely describe the purchase later as ‘some [golf] balls for the wounded warriors.’” She also instructed him to take out $100 in petty cash from his work account.

I didn’t think it was possible for someone who is already a troop to steal valor, but Duncan Hunter, with the help of his wife, figured it out.

Just including this because it’s the base where Top Gun takes place. Aka Fighter Town, USA.

Do you understand how hard you have to ball to spend over $40 at 7-Eleven? If you give them your phone number for their rewards program, coffee costs $1 there.

One of his few legitimate charges. It would be wrong to criticize him for this.

There’s much, much more here. Read the list in its entirety if you want a full picture of just how banal American political corruption can be.