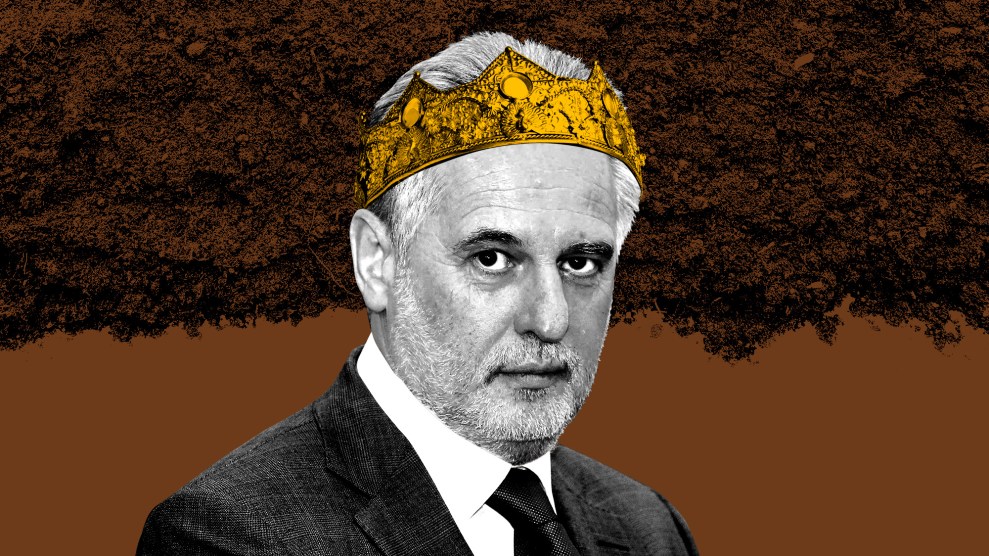 Those paying close attention to President Donald Trump’s impeachment drama will have heard of the Ukrainian oligarch Dmitry Firtash. His story contains multitudes. He stands accused by the US government of bribery in a convoluted case involving an attempt to sell Indian titanium to aerospace giant Boeing. In the 2000s, he rubbed shoulders with Paul Manafort, the former Trump campaign chair who’s now serving time for crimes linked to his work with the pro-Russia political party that Firtash funded for years. Recently, Firtash became embroiled in the quixotic quest of Trump’s personal lawyer, Rudy Giuliani, to dig up Ukraine-related dirt on Democratic presidential frontrunner Joe Biden, as revealed in a stunning New York Times piece.

Since posting an eye-popping $174 million bail bond in 2014, Firtash has overseen his conglomerate Group DF in exile, living under house arrest in Vienna while he fights extradition to the United States. Even though he’s cut off from his home country, he has continued to reap the rewards of his investments there. The jewel of his business empire is a subsidiary called Ostchem, which commands what the Ukraine government calls a monopoly on the country’s market for nitrogen fertilizer (an assessment the company disputes).

This is a plum asset, given that Ukraine is in the midst of an agricultural boom. Firtash’s emergence as Ukraine’s fertilizer king illustrates the power of crony capitalism in shaping the economies of post-Soviet Russia and its now-independent former republics—the atmosphere of big money and lax regulation that made the milieu of Russian President Vladimir Putin so irresistible to Trump and his own cronies.

Born in 1965, Firtash grew up under communist rule. When the Soviet Union collapsed in 1991, leaving a kind of economic wild west in it wake, Firtash—who trained as a firefighter—launched a business in Chernivtsi, Ukraine, trading canned goods and dried milk, reports a 2008 US State Department cable released by WikiLeaks. The document recounts a conversation Firtash had with officials at the US embassy in Kyiv that year, in which he explains the origin of his career.

Over time, he transitioned his trading business from food to natural gas. By doing so, he landed in a sweet spot amid economic chaos: After the Soviet Union collapsed, Ukraine had no significant domestic energy production and desperately needed gas for winter heating. Russia was (and still is) a major natural gas producer. Firtash built a niche for himself by serving as an intermediary between state-owned Russian gas giant Gazprom and the Ukraine market. From this perch, he emerged as a classic post-Soviet oligarch.

Firtash built a niche for himself by serving as a middleman between state-owned Russian gas giant Gazprom and the Ukraine market.

As his gas fortune grew, Firtash cultivated political capital. He was a funder and major player in the Party of Regions, the Putin-aligned political party that won control of the government in 2010 after hiring US political operative Paul Manafort as a lobbyist and adviser. A 2006 State Department cable released by WikiLeaks called the party a longtime “haven” for “mobsters and oligarchs,” noting that Manafort’s firm had been hired to give it an “extreme makeover.” Manafort would later serve a stint as Trump’s campaign chair during the 2016 election—and is now serving a seven-and-a-half-year prison sentence after having been convicted of conspiracy, obstruction of justice, and tax evasion for machinations surrounding his work with the Party of Regions. In 2008, Firtash and Manafort reportedly joined forces in an ultimately unsuccessful attempt to buy Manhattan’s Drake Hotel for $850 million.

In 2010, the same year his ally, Party of Regions politician Viktor Yanukovych, won election as president, Firtash made a smart business move: He started buying up his country’s nitrogen-fertilizer factories. Corn, soybean, and wheat prices were surging on global markets, and Ukraine boasts a vast swath of some of the globe’s richest farmland—a glorious cache of prairie-derived topsoil similar to that of the US Midwest. Historically, the breadbasket of Tsarist Russia and later the Soviet Union, Ukraine’s “black soil” region had only recently emerged from a decade of stagnation after the fall of the Berlin Wall. By the late 2000s, as Ukraine’s farmers scrambled to take advantage of the boom, they applied more fertilizer to boost yields. The move to farm chemicals made sense for Firtash. Natural gas is the key input in the production of nitrogen fertilizer—and his connections to Russia gave him plenty of access to cheap gas.

Ukraine boasts a vast swath of some of the globe’s richest farmland—a glorious cache of prairie-derived topsoil similar to that of the US Midwest.

In a 2014 investigation, Reuters found that Firtash’s successful push into fertilizers wasn’t just the case of a savvy business leader seizing a lucrative opportunity when he saw it. Rather, it was “built on remarkable sweetheart deals brokered by associates of Russian leader Vladimir Putin, at immense cost to Russian taxpayers.” According to the news agency, a Russian bank called Gazprombank—tied to, but not wholly owned by, the state-owned Russian gas giant Gazprom—extended Firtash a line of credit worth up to $11.15 billion, which he used to buy the fertilizer factories. With the factories in hand, Firtash’s new chemical subsidiary, Ostchem, needed access to gas. According to Reuters, citing Russian customs records and other documents, Gazprom supplied Ostchem gas at a discount of more than 30 percent. “The prices and volumes suggest that the two offshore Ostchem companies made an operating profit of approximately $3.7 billion in two years” off of the Ukraine fertilizer market, Reuters reports. The kicker: By selling gas below market price to Firtash’s Ostchem, Gazprom—majority-owned by the Russian public—forfeited $2 billion in profit in 2012 and 2013.

In 2014, things went pear-shaped for Firtash and his political cronies. That year, protests erupted in Kyiv over the Party of Regions’ pro-Russia stance. President Viktor Yanukovych was ousted and fled to Russia. Soon after, the US Department of Justice indicted Firtash for “participating in an alleged international racketeering conspiracy involving bribes of state and central government officials in India to allow the mining of titanium minerals”—a legal battle he continues fighting today, holed up in Vienna.

On June 21, a US district judge in Illinois rejected Firtash’s motion to dismiss the bribery case. Days later, an Austrian judge ruled that Firtash could be extradited to the United States. According to a blockbuster New York Times piece published on November 25, it was this legal tangle that put him in touch with Giuliani and his erstwhile associates, Lev Parnas and Igor Fruman, the “Rosencrantz and Guildenstern of the Trump-Ukraine scandal,” as Mother Jones’ David Corn recently put it. In late June, the Times reports, the Giuliani crew offered Firtash help with his Justice Department problem, “if Mr. Firtash hired two lawyers who were close to President Trump and were already working with Mr. Giuliani on his dirt-digging mission.” At Giuliani’s suggestion, Firtash replaced his previous lawyer with Trump-allied attorneys Victoria Toensing and Joseph diGenova this year, the Times reports. They succeeded in securing a meeting with Trump’s attorney general, William Barr, to request the charges against Firtash be dropped. Barr declined to do so, Firtash told the Times.

Meanwhile, Ukraine remains in the midst of a fertilizer-guzzling agricultural renaissance. Its output of corn—which requires plenty of nitrogen to achieve bumper harvests—more than tripled between 2010 and 2019, and the country has emerged as the dominant corn supplier to China, providing feed for the nation’s booming meat industry. Total nitrogen fertilizer use over that time period rose about 50 percent. Firtash’s company, Ostchem, retains its monopolistic hold over Ukraine’s nitrogen-fertilizer market.

But the winds could be shifting. Back in September, the Antimonopoly Committee of Ukraine (AMCU) ordered Firtash’s fertilizer subsidiary, Ostchem Group, to sell off one of its five nitrogen fertilizer plants, the Kyiv Post reported. The AMCU claimed Ostchem “abused its monopoly to jack up fertilizer prices during the 2014–2017 period,” the Post added. DF Group rejects the claim it wields a dominant share of the domestic market, and recently filied an appeal of the government’s monopoly ruling. “We are sure that we are not a monopolist, and are ready to prove it in court,” a Group DF spokesperson wrote in an email.

The oligarch’s fertilizer assets face another potential headwind, this one emanating from Washington. Ukraine’s position as China’s number-one corn purveyor gives the country’s corn farmers ample incentive to continue applying plenty of nitrogen to keep the bumper crops coming. Trump’s trade war with China has reinforced Ukraine’s place in that massive market. Eventually, the trade war will end—and a deal favorable to US agriculture imports would put Ukraine’s corn farmers in fierce competition with their American counterparts for this massive market. A “strong US-China trade deal could put the brakes on the future of Ukraine as a major corn supplier to China,” said Stefan Vogel, head of agricultural commodity markets for Dutch bank Rabobank.

So it’s not only the United States Justice Department that imperils Firtash’s position as a wealthy oligarch. The Office of the US Trade Representative could have something to say about it, too.