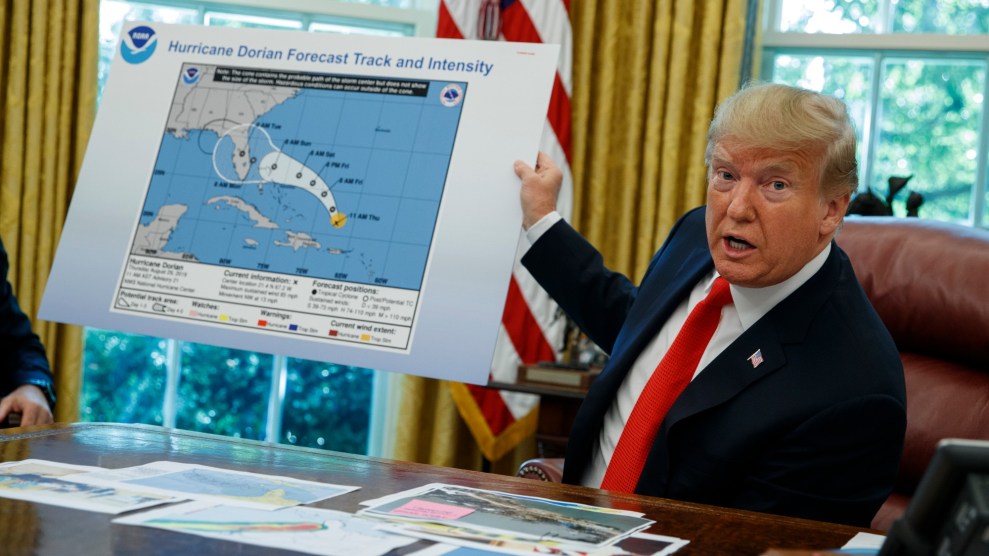 Before impeachment, there was another big scandal. No, not that. This one involved President Donald Trump not admitting he got something a little wrong and then throwing a government agency under the bus, taking a big black marker to forge a weather map, and also rage-tweeting that he was right about an upcoming natural disaster (instead of, you know, trying to help mitigate a natural disaster).

Now, according to some emails released Thursday, we know that the whole chain of events made plenty of people mad and led to a pretty hellish few days for the National Oceanic and Atmospheric Administration.

To back up: This started when Trump tweeted back in September that Hurricane Dorian would hit Alabama; it turned out it would not. A local NOAA twitter account in Alabama noted the storm was not hitting their state. (The local NOAA social media post was, according to internal emails, a clarification after an inordinate number of concerned people reached out to see if Alabama would be harmed by the storm. “It was later learned that the uptick in calls/concern regarding Alabama may have been related to a White House tweet earlier in the day,” an Alabama based meteorologist explained.) Soon after, national NOAA caved, releasing a statement saying the Twitter account in Alabama got it wrong. And that’s when Trump or someone in the White House sharpied a new “cone of uncertainty” on the map to try to cover up the president’s mistake.

After all that, NOAA eventually changed its position and said it would defend science. The director of the National Weather Service Louis Uccellini led a standing ovation for weather forecasters in Birmingham shortly after sharpie-gate and the agency released a letter saying it had “inappropriately and incorrectly contradicted the NWS [the National Weather Service] forecaster.”

And sometime after that, we FOIA’d NOAA’s emails.

We found that there were some inklings of anger at the president inside NOAA. Someone wrote in to say that the “current White House Administration has placed undue burdens on those of us in positions of life-and-death responsibility” and demanded that “[r]egardless of pressure being so unfairly, perhaps criminally, exerted, NWS needs to re-issue a public restatement of the truth.” (The bolding and italics are straight from the source—we’re talking angry emails to government agencies.) Uccellini acknowledged that the email was a “powerful statement.”

The emails also show a little towing to political concerns. There was a discussion about replying to an AP reporter looking for clarification on the forecast after Trump’s initial tweet because, as a media relations officer at NOAA wrote, “I don’t want them calling around…”—presumably to other agencies or the White House. (They settled on the following perfunctory email: “The current forecast path of Dorian does not include Alabama.”) In another email, NOAA officials also flatly instructed staff to “NOT respond via social media, or other, to any questions which arise from a tweet recently posted by the White House containing an old NHC forecast for Dorian.”

But what we found most is that people were just really mad at NOAA for seeming to cave to the president. And also, for not seeming to cave to the president. Either way, people were very, very upset—and that, according to our very scientific assessment, left a lot of NOAA employees empty inside.
We have to admit these emails are a nice window into how one person’s pettiness can ruin a few days of other people’s lives. Here we’ve divided those emails sent to NOAA into two main categories: mad and pizza. All spelling choices theirs.
Mad

“Who is the wimpy coward who won’t disclose his name on the Alabama debacle siding with Turmp? I’m assuming we will all find who it is. How pathetic this individual must be. They need to slither back into the swamp. They have Trump stink all over them. If they had any self respect they would resign rather than enable this evil narcissist. SHAME! SHAME! SHAME!!!!!!!!”

“I am greatly distressed by NOAA officials allowing the President to get away with tampering with an official NOAA map. I thought that was illegal. And to make it worse, you retracted your mild rebuke. You have lost all credibility. What happened to your professionalism? I never thought I would say this, but I am truly ashamed of you.”

“President Trump is using a recent unsigned NOAA statement to justify his claims that Alabama was at serious risk from Hurricane Dorian. The unsigned statement leads many to believe that this is simply President Trump manipulating another of the agencies under his command. If NOAA is to maintain it’s integrity they must put a face to this and have someone in a high leadership position come out and either defend the unsigned statement or denounce it. The citizens of the United States deserve this at the very least.”

“To stab in the back all of the dedicated scientists that work on behalf of the USA (and the world), to get your 30 pieces of silver from a lying, ignorant, Putin loving traitor is beyond the pale. That’s the nicest possible way I can put it. I hope you are forever shunned and never get an honest job again, with all that brown on your nose you will carry the stench of eau de trump always, and it really, really stinks.”

“Do you have any idea the damage you have done to NOAA’s reputation and credibility? Do you care? NOAA is no place for a political hack. We taxpaying citizens need to know that our weather data and forecasts are accurate and honest. To help you understand, ask yourself what you would think if the NWS put out an inaccurate forecast for heavy snow during a Trump rally in New Hampshire. That you used official channels of communication to support Trump in his self-created problem is itself unethical, and maybe illegal. Aren’t you covered by the Hatch Act? You should resign immediately. You should make yourself legit by getting a job in Trump’s reelection campaign.”

“Now, I wonder if I can trust NOAA and NHC. If you alter past forecasts to suit Trump, what’s to stop you from altering forecasts that Trump doesn’t like? What if Trump plans a rally in North Carolina and the forecast is heavy rain and flooding, but Trump wants his ‘huge audience with thousands of people outside?’ What if Trump has a meeting scheduled at one of his resorts, and he doesn’t want to reschedule it? Should I check with independent meteorologists to get their predictions? But aren’t those meteorologist dependent on NOAA observations and data? Who else has the capability to do that level of data gathering and analysis? Maybe I should look to Canada, Germany or the UK for their weather services’ predictions?”

“Why don’t you take your theology degree to a pulpit where you can hold forth on the scientifically unverifiable existence of a deity, instead of inflicting your boot-licking, pandering attitudes on the people who pay your salary? All scientists in this country see right through you. Grow a pair or get out. Stop taking tax money if you can’t do your job.”

(Ed note: This one solicited a “these are getting very personal” message from a NOAA official.)

And, finally, NWS’ director of public affairs spells out how bad it got:

“FYSA: I wanted to let you know that the NWS PA team is receiving a lot of angry/hate mail and phone calls on our cell phones about the statement NOAA released yesterday. I am starting to get forwards from WFOs who are receiving the same type of mail in their general email boxes. We are not responding, but I wanted leadership to have the best situational awareness of the fallout. People are finding us on LinkedIn and targeting us with hate mail from there as well.”

In the ensuing thread, it mentions that people in the agency “have had to turn off their cell phones due to the large volume of calls” and that this “has really gotten out of hand. One of my forecasters just messaged me and said CNN is contacting him on his personal twitter asking for comment.” The response: “Yes, I am being targeted as well. This is a difficult time.” (This email is thread is titled “Re: Angry Stakeholders”.) 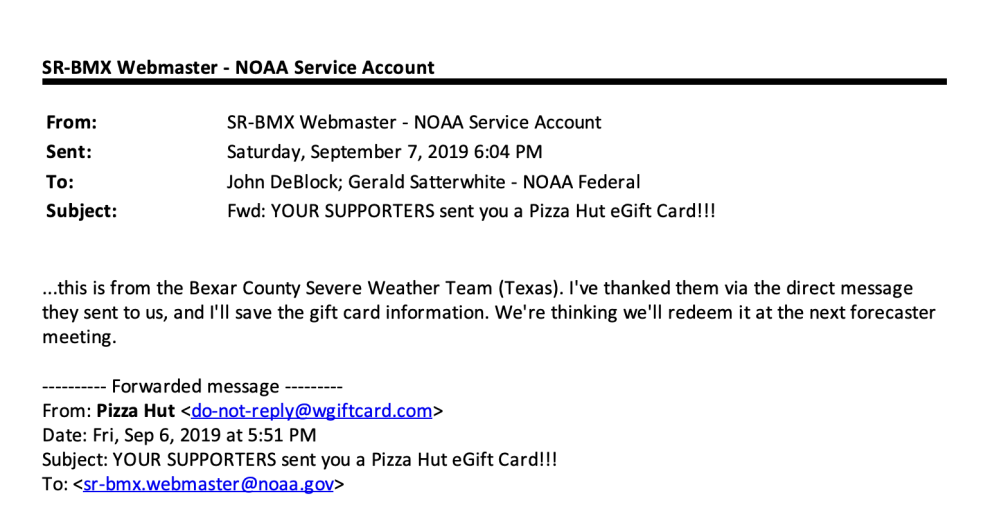 Update, Friday, Nov. 8, 2019: A previous version of this article misstated Uccelleni’s role. It has been updated to say he is director of the National Weather Service.