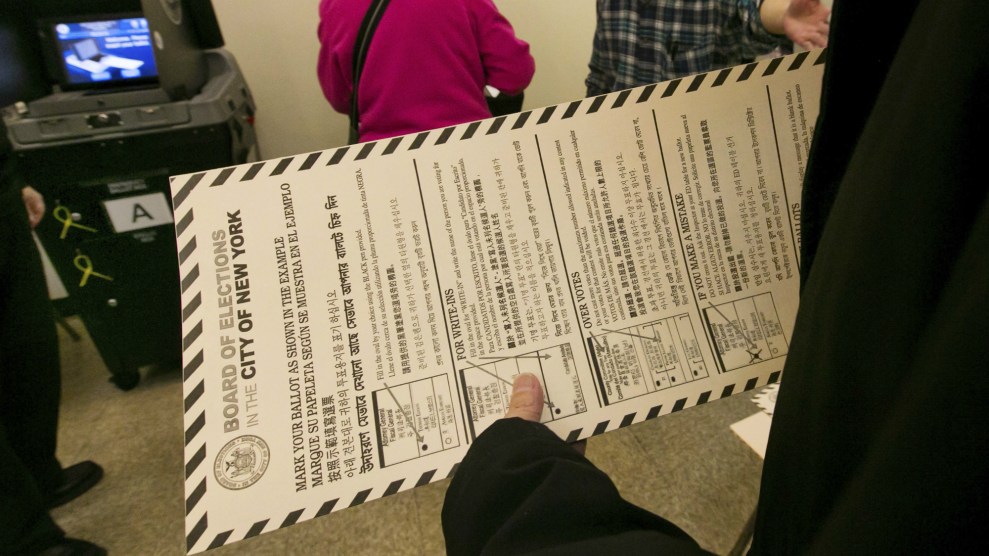 In today’s election, New York City is considering adopting ranked-choice voting. If passed, it will be the largest municipality to adopt the innovate voting process.

Ranked-choice voting is basically an “instant runoff”: Voters not only vote for one candidate but rank their preferences. New York City’s version of RCV would, for example, allow voters to rank five candidates for mayor. If one candidate wins a majority of first preference choices, they’re elected. If not, the person with the fewest first choice votes is eliminated. Then the votes for the now-eliminated candidate get redistributed to the voters’ second preferred choice. This continues until one candidate has a majority.

In the current system, “you’ve got real vote-splitting problems, you got the spoiler scenario,” Steven Mulroy, a University of Memphis law professor who wrote a book on RCV, tells me. Imagine, as the New York Times editorial board did in endorsing the measure, the following situation:

In multicandidate races like this, the winning candidate often has less than majority support. The mayoral race is required to hold a runoff if no candidate breaks 40 percent of the vote, but no similar cutoff exists for City Council races. This can create a “spoiler effect,” where an unpopular candidate can win with, say, 25 percent of the vote, solely because his or her opponents split the rest.

(Just to keep on New York Media, on the always-fun tabloid side, the New York Daily News has warring op-eds on ranked-choice voting.)

This spoiler scenario leads to people not voting their real preferences, Mulroy argues. “How many of us have heard someone say, ‘A vote for Jill Stein is really a vote for Trump?'” By allowing for preferences, a voter can choose not only their optimal candidate but ensure voting for someone who may not win wouldn’t help someone they hate.

Labeled Question 1, the ballot measure could overhaul the election system ahead of the 2021 mayoral elections. It would apply to city-wide elections like city council, comptroller, and public advocate, too. Michael Douglas has lent his face to the campaign, advocating for a yes vote on the ballot measure in a series of videos for Rank The Vote NYC. (I thought “Longball” was his best work among the batch, but my second preference would be “Reform” and my third would be “Pithy.”)

Another key aspect of ranked-choice is that it eliminates runoffs, which typically have low turnout. FairVote, an advocacy organization for fair elections that supports RCV, points out that in 96.5 percent of 171 congressional runoff elections between 1994 and 2012, fewer people voted than in the general. “The problem is if you make people go to the polls over and over again, then you end up having a real low voter turnout,” Mulroy says. Runoffs have long led to lower turnout on the state level, too. What’s more, RCV could save money for localities; a mayoral runoff in Phoneix, Arizona, for instance, cost a million dollars.

Studies have shown myriad of other benefits: RCV could help tone down campaigns based on attacking opponents (if you want the other candidate’s base to put you second, you won’t throw mud). And FairVote argues RCV leads to a more representative government—boosting officials of color and women.

On the other side, RCV has been called confusing. Researchers have documented “ballot exhaustion” in which voters did not fully rank preferences, and as a result the elected official did not receive the majority of the votes cast. Plus, the tabulating of several preferences could be more costly than the traditional calculation of ballots.

New York City would follow a dozen-plus other municipalities, as well as the state of Maine, in adopting RCV, and could be a model for some of the country’s largest cities to follow. But the fight over RCV may not end with the ballot on Tuesday. Maine voted on RCV back in 2016, but it only recently fully approved it for presidential elections. The measure was challenged in court and had to go back before the legislature. “Where it gets adopted, at first there is massive resistance by the incumbent power structure,” Mulroy says. “People in power like the system that brought them to power.”