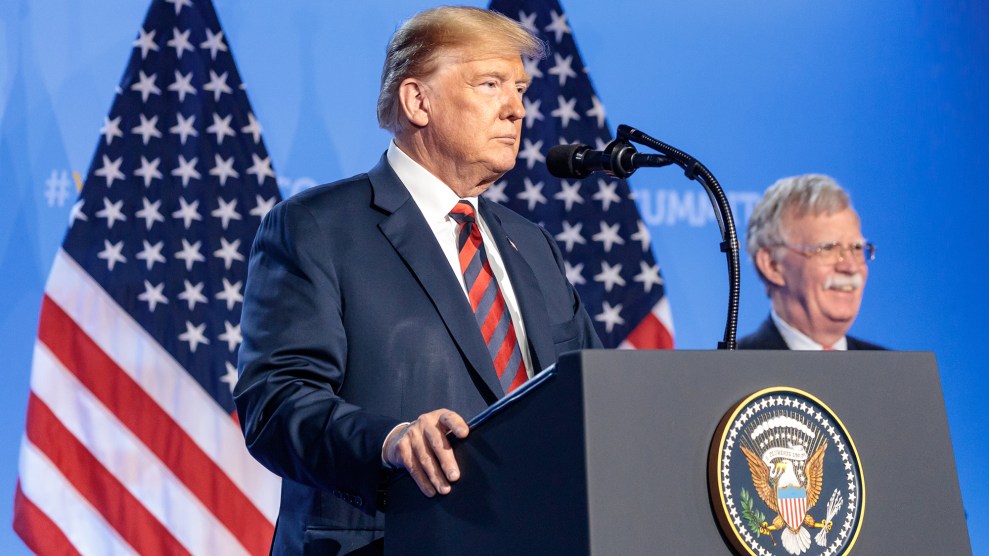 In the wake of the whistleblower complaint at the heart of the biggest threat to his presidency to date, President Donald Trump has “ordered a substantial reduction in the staff” at the National Security Council, Bloomberg reported late Friday night. Some officials told Bloomberg that the reductions were part of an effort to increase efficiency following the departure of former National Security Adviser John Bolton. This point was underscored in late September, days after Trump named Robert O’Brien—a lawyer, United Nations delegate under George W. Bush, and, most recently, a State Department hostage negotiator—to be his new national security adviser. But the scandal underlying the whistleblower complaint certainly isn’t bolstering attempts to protect the job security of those working there.

The NSC is a national security planing and coordinating group within the White House that has been staffed, in part, by officials detailed from other agencies such as the FBI or CIA. Once a prestigious career booster, under Trump “some of the brightest minds are turning down” NSC assignments, while “others are avoiding the place altogether,” according to NPR, which detailed some of the morale issues in mid-September in the wake of Trump’s ousting of Bolton after disagreements over how to handle North Korea and Iran.

Under Trump “some of the brightest minds are turning down” NSC assignments, while “others are avoiding the place altogether.”

Since then, the worsening situation has been further exacerbated by the fact that one of the main allegations lodged in the whistleblower complaint is that the White House has been using a classified computer system designed for the most sensitive NSC information to stash politically-embarrassing or sensitive material the Trump administration doesn’t want others to see. Add to this, the speculation that the whistleblower, identified by the New York Times as a CIA analyst, may have been detailed to the White House as part of an NSC assignment.

Trump has attacked the whistleblower and has said the White House is working to “find out about” them. On Friday, he retweeted an unsubstantiated allegation that the whistleblower was “a registered Democrat & CIA analyst” detailed to NSC before the 2016 election “where he worked on the NSC’s Ukraine desk & met [with] anti-Trump Ukrainian officials before being sent packing by the Trump NSC & becoming disgruntled.”

Saturday morning, Politico reported that the episode has “injected new tension and uncertainty into the grueling day-to-day routine” at the NSC. According to the report, those who are most worried are the experts on the Ukraine and Europe. “One question people are asking is, ‘Are the implicated NSC people going to stay or kicked out?'” one NSC official told Politico. “I’m surprised these people are still here.”

The NSC has long been known as a tough place to work due to the intense pressure at any given time, but some have said things seem worse under Trump. Dan Shapiro, a former NSC official under President Obama, touched on the point Saturday:

The NSC is a tough place to work under the best of curcumstances, when there is ethical leadership and a transparent policy process. It must be impossible in the current morass of corruption, opacity, and mistrust. Its dysfunction harms US interests across the board. https://t.co/eU0XDTufqh

It remains unclear how deeply the NSC will be dragged into the impeachment battles on Capitol Hill, as one of the texts released by House Democrats this week refers to at least one NSC official who may have been involved in trying to coordinate a call between Trump and the Ukrainian president as part of normal duties.

Javed Ali, the Towsley Policymaker in Residence and a visiting professor at the University of Michigan’s Ford School of Public Policy, and the former senior director for counter-terrorism at the National Security Council under the Trump administration, told Mother Jones that many of the issues now being raised have been concerns in the past. For example, there’s been a debate about the size of the NSC for many years under several administrations, as the office has grown far larger than originally conceived. Bloomberg pegged the NSC staff size at about 310, but in previous years it has been as high as 400, prompting concern from some that it had become more of an operational office than an organizational one.

Staffing and morale issues reported over recent weeks are also nothing new, as it has always been difficult to attract interest in these positions nearer the end of any administration’s term in office, or as a reelection campaign looms. Some people who had worked in Trump’s NSC and left, have returned, Ali says, suggesting that morale “can’t be that bad.”

However, the main role of NSC staff is to offer policy makers the best analysis and advice and not get involved in political matters. “The more the NSC gets dragged into these political, partisan debates,” he says, “the worse it is overall.” The ongoing issues with Ukraine and the whistleblower could be having some effect on those who work there. Trump has also been accused of overtly politicizing the NSC in unprecedented ways, such as when he elevated former chief political strategist Steve Bannon to the Principals Committee, or when the White House and a former NSC staffer teamed up with Rep. Devin Nunes (R-Calif.) to bolster Trump’s claims that the Obama administration had spied on him. Trump is on his fourth national security adviser in less than three years, so time will tell how O’Brien manages the situation.

“The more you’re out of the limelight, the better things go organizationally,”Ali says, referring to the role of the National Security Adviser. “We’ll see how he does now that the NSC is dragged into this thing.”