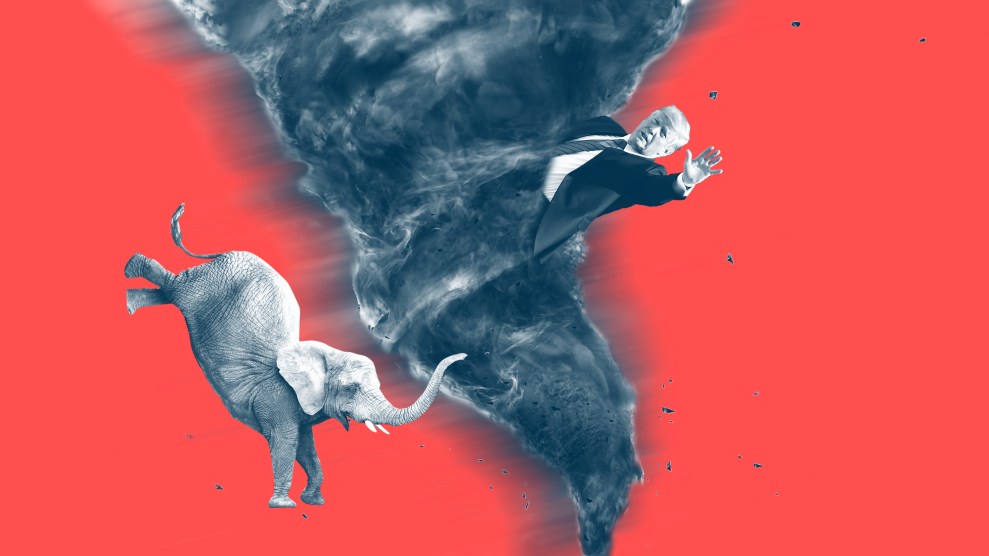 6:10 p.m. ET: In an eight-page letter to House Speaker Nancy Pelosi, Rep. Adam Schiff, Rep. Elijah Cummings, and Rep. Eliot Engel, White House general counsel Pat Cipollone set a domestic record for political chutzpah, accusing the Democrats of moving forward with an impeachment inquiry “in a manner that violates fundamental fairness and constitutionally mandated due process.” It is a remarkable, spluttering document, and nothing short of a declaration of war on the House impeachment inquiry, the separation of powers doctrine, the Constitution, democracy, and contemporary English-language prose.

In the letter, Cipollone, writing on behalf of President Donald Trump, insists that the president be allowed to cross-examine witnesses during the House’s investigation, as if that were a perfectly normal thing to demand. (It isn’t. That’s what the full trial in the Senate is for.) And be sure to stick around for his description of the “completely appropriate” Ukraine call.

Cipollone also whines that Democrats are simply trying to “overturn the results of the 2016 election and deprive the American people of the President they have freely chosen.” Read the whole thing below.

5:32 p.m. ET: The White House said that it would not participate in House Democrats’ impeachment probe, the Washington Post reports, intensifying tensions between the president and those conducting the impeachment inquiry.

White House declares that it will not participate in impeachment inquiry because it is illegitimate and violates precedent and due process.

4:45 p.m. ET: The New York Times reports that a White House official who listened to the July phone call between Trump and the president of Ukraine called it “crazy,” “frightening,” and “completely lacking in substance related to national security.” The CIA whistleblower wrote in a memo the day after the phone call that the White House official was “visibly shaken by what had transpired,” the Times reports.

3:25 p.m. ET: As Trump continues digging holes for himself, Democrats are debating just how broad the scope of the impeachment inquiry should be. Should it stay focussed strictly on Ukraine, as Nancy Pelosi has argued? Should it include potential obstruction of justice allegations outlined in the Mueller report? How about Trump’s use of the presidency to enrich himself or his abusive family separation policy? Kara Voght reports:

After the whistleblower’s allegations unified House Democrats around an impeachment inquiry, progressive lawmakers seemed to get in line with Pelosi’s call for a narrow focus on Ukraine. “The issue with Ukraine is the one that gets us to 218 [Democrats], right?” Rep. Rashida Tlaib (D-Mich.), a longtime impeachment supporter, told me right before Congress broke for October recess. Rep. Pramila Jayapal (D-Wash.)—a CPC co-chair and Judiciary Committee member who has long called for impeachment—told me Democrats would have to be “very strategic and careful” to not “put out a wide list of things” that might diminish the investigation’s credibility with voters…

Some progressive activists, however, aren’t giving up on a broader impeachment inquiry…“The movement is at a critical stage,” said Anthony Torres, the political director of grassroots group By the People. “If we don’t impeach him on all of his high crimes, what we do is we set a precedent for whoever comes next in the presidency to continue those same abuses of power.”

Last week, the Progressive Change Institute, which has worked close with By the People on impeachment efforts, conducted a survey that concluded that other polling had undercounted support for impeachment. Among the 49 percent of respondents who said they supported an impeachment inquiry, 71 percent of them said that Congress should vote on articles of impeachment that include “all alleged high crimes and misdemeanors, not just the most recent high-profile one.”

Meagan Hatcher-Mays, Indivisible’s director of democracy policy, said she’s hopeful that the articles of impeachment under consideration will include obstruction of Congress, obstruction of justice, and violations of the emoluments clause, which bars the president from using his office for personal enrichment. “We’d be satisfied with the greatest hits,” she says.

But even as Democratic leaders try to keep their public messaging focused on Ukraine, their legal team is making a different argument in court:

Legal considerations may also encourage Democratic leaders to expand their investigation, since a formal impeachment proceeding is widely believed to give lawmakers greater power to demand documents and testimony that the administration has sought to withhold. On Tuesday, during a federal court hearing on Democrats’ lawsuit to obtain the grand jury materials from Mueller’s Russia investigation, House counsel Doug Letter argued that the impeachment inquiry is not, in fact, strictly limited to Ukraine. He explained that six House committees will share the results of various investigations—which could include allegations related to the Mueller report, or even the president’s taxes—and that the Judiciary Committee will report recommended articles of impeachment to the full House. As for the emphasis on Ukraine, Letter said, “right now the media is focused on that.”

1:00 p.m. ET: Last week, the former special envoy to Ukraine, Kurt Volker, provided Congress with a trove of text exchanges related to Ukraine. One of the more damning exchanges involved Sondland and Bill Taylor, a top diplomat to Ukraine, during which Taylor called it “crazy” to tie Ukrainian assistance to help Trump’s reelection campaign. Denying the proposal of a quid pro quo, Sondland then suggested that the conversation stop happening over text. So, what happened between Taylor’s “crazy” remark and Sondland’s sudden concerns with the medium of their conversation? A phone call with the boss, NBC reports:

NEWS: A person with knowledge of the situation confirms to NBC that Gordon Sondland spoke by phone with Pres. Trump on Sept. 9 before responding to acting Ambassador to Ukraine Bill Taylor’s text about it being “crazy” to link Ukraine assistance to help with a political campaign.

NEW: Dems will be issuing a subpoena for Sondland testimony/docs.
State Dept left Sondland's attorneys a voicemail at 12:30 a.m. informing them that testimony would be blocked. Sondland also recovered relevant texts on his personal device, but turned them over to State, Dems say. pic.twitter.com/wOrnrjJstI

10:40 a.m. ET: Rudy Giuliani’s television meltdowns have earned him an invitation to speak before the Senate Judiciary Committee, compliments of Sen. Lindsey Graham. Get ready for more conspiracy theories and spitting.

10:10 a.m. ET: Trump, after blocking testimony from a witness who used a personal device to carry out incriminating text conversations, plays the hits.

I think that Crooked Hillary Clinton should enter the race to try and steal it away from Uber Left Elizabeth Warren. Only one condition. The Crooked one must explain all of her high crimes and misdemeanors including how & why she deleted 33,000 Emails AFTER getting “C” Subpoena!

9:50 a.m. ET: Here’s a bit more background on Sondland from Mother Jones’ Russ Choma. Sondland’s main qualification for serving as Trump’s ambassador to the EU seems to be his career as a hotel magnate and GOP megadonor who contributed $1 million to Trump’s inaugural committee:

According to OpenSecrets.org, Sondland has given at least $446,000 to federal candidates in the last few decades. Almost all the recipients were Republicans, but of the more moderate type—Jeb Bush’s Right to Rise PAC, for instance.

As the 2016 election ramped up and Jeb Bush was eclipsed by Trump, Sondland quickly aligned himself with nominee. The relationship hit a hiccup, however, when Trump denigrated Gold Star mothers at the Republican convention in 2016, Sondland and his business partner very publicly insisted that their names be taken off the invitations as hosts of a Trump fundraiser.

Sondland is not listed as a donor to Trump’s campaign—though he did donate the maximum amount to the Republican National Committee before Trump was nominated. Nonetheless, the hotelier and Trump must have patched things up, because Sondland appears on a list of the 2016 Trump campaign’s bundlers—a fundraiser who taps a network of other deep-pocketed donors to support a candidate. And, perhaps most importantly, OpenSecrets reported, Sondland wound up donating $1 million to Trump’s inaugural committee.

9:35 a.m. EST: House Intelligence chairman Rep. Adam Schiff slams Sondland’s failure to appear before lawmakers. Schiff says that Sondland has relevant text messages on a personal device that the State Department is withholding. Other Democrats, including 2020 presidential candidates, are also weighing in:

Someone should tell Donald Trump that you can definitely be impeached for obstruction of justice.

FYI the State Department doesn’t keep these people under lock and key. Gordon Sondland is an adult – he can obey the law and testify if he wants. We shouldn’t let him or anyone else get away with blaming their violation of the law on Pompeo. https://t.co/zGh7OdudI8

If @realDonaldTrump & @SecPompeo are innocent, they wouldn't be suppressing the testimony of Amb Sondland. Instead, they are hiding information from the American people.

9:25 a.m. ET: Trump makes it clear that the decision to block Sondland’s testimony came directly from the top.

….to see. Importantly, Ambassador Sondland’s tweet, which few report, stated, “I believe you are incorrect about President Trump’s intentions. The President has been crystal clear: no quid pro quo’s of any kind.” That says it ALL!

8:20 a.m. ET: The State Department is now blocking Sondland’s deposition. “He is a sitting Ambassador and employee of State and is required to follow their direction,” Sondland’s lawyer said. Here’s the full statement:

8:00 a.m. ET The Washington Post has a new poll showing that a majority of Americans now support the impeachment inquiry, with almost half saying Trump should be removed from office.