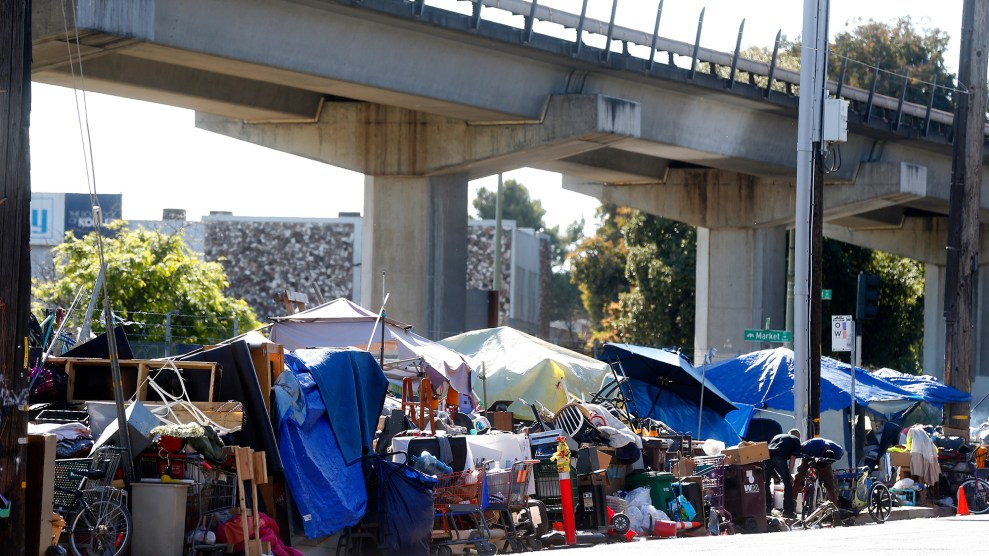 In recent weeks, President Donald Trump has escalated his ongoing feud with California, repeatedly turning his attention and Twitter feed to the state’s homelessness crisis. The administration is reportedly planning a crackdown that may involve moving homeless people in the state to government-backed facilities. After visiting last month, Trump claimed—seemingly without basis—that needles and other trash from San Francisco and Los Angeles are “pouring into the ocean.” Confusingly, he tied the cities’ legitimate housing problems to water pollution, threatening federal action for supposed Clean Water Act violations. Then, last week, the EPA lent credence to the president’s claims by citing San Francisco for environmental violations relating to its homeless problem. (Ironically, Trump and the EPA voiced sudden concern for California’s environmental protections around the same time they officially revoked the state’s ability to set stricter auto emissions.) On Thursday, in response to this and other recent EPA actions against the state, almost 600 former EPA officials called for an investigation into the administration’s targeting of California, saying the warnings “were intended as retaliation for the state’s failure to support President Trump’s political agenda.”

Meanwhile, in the 2020 budget request, the Trump administration proposed cutting the Housing and Urban Development budget by a drastic $9.6 billion (19 percent below 2019 levels).

“You expect this kind of ridiculousness from Donald Trump, but you don’t expect that from the EPA.”

The absurdity of Trump’s attacks, though, shouldn’t paper over the very real housing crisis in California. State Sen. Scott Wiener, who represents San Francisco—where the median price for a one-bedroom rental is about $3,700 a month—has seen this crisis up close and has been a vocal affordable housing proponent since he served on the San Francisco Board of Supervisors. He’s known for pushing bold but sometimes controversial policies. He is currently sponsoring a bill, after a previous iteration failed last year, that aims to ease the housing squeeze by increasing high-density residential building around transit hubs. The proposal has left affordable housing advocates divided; more housing could ease costs and outsized demand, and the current version of the bill includes more renter protections and affordability requirements, but some think it will exacerbate gentrification.

What they can all agree on is that Trump doesn’t know what he’s talking about. “Our housing policy doesn’t work in California,” Wiener says. But “the president is not interested in helping us solve our problems.” I recently caught up with Wiener to talk about the real roots of the housing dilemma, the solutions he thinks are necessary, and why the president’s comments pretty much make no sense. Below is an edited and condensed version of our conversation.

The attacks are really despicable and baseless. This idea that somehow feces or needles could be going into the sewer drain and that would go directly into the ocean, that’s just flat out wrong. If the president knew anything about our sewer system, he would know we have a combined sewer system. All of our sewage, whether it comes from people’s toilets or from the sewer drains, gets treated at a world class water treatment facility and purified. And so there’s just no factual basis for what what he’s saying. You expect this kind of ridiculousness from Donald Trump, but you don’t expect that from the EPA.

The EPA has been involved with San Francisco’s combined sewer system for a long time. It has repeatedly signed off on different changes that we’ve made. And now the EPA has been politically hijacked by Donald Trump to issue some sort of notice of violation where there is no violation. It plays into the president’s broader political narrative attacking California, attacking San Francisco, for the exclusive goal of riling up his base because his presidency is falling apart.

“This president has just been atrocious in terms of providing help and resources.”

What will happen with the EPA citation?

I think it is a stunt and he’ll probably keep going down this road until the election. But ultimately, the city of San Francisco strongly disagrees with the EPA’s political assertions, and I suppose it could result in litigation. But we’ve been litigating with this administration quite a bit, so there’s nothing new there.

What does the federal government do to help or hurt states and cities tackling homelessness?

This president has just been atrocious in terms of providing help and resources to cities and states and our efforts to fight homelessness. He’s been cutting affordable housing funds. He’s been cutting food assistance, aggressively attacking the social safety net, trying to throw people off health care. These are all things that increase homelessness. If he wants to help us fight homelessness by increasing investment in housing and other services, then we welcome that.

There’s still the federal Low Income Housing Tax Credit, which we rely on. But in the past, the federal government funded significant investment in housing and that’s really drying up. And we would love for that to come back so we can build more public or social housing for low-income people.

Why is the homelessness problem in California so intractable despite big investments and a lot more focus?

The push has really only been in the last few years. Before a few years ago, California wasn’t doing nearly enough. It’s still not doing enough, but it’s doing more, and I think some of those seeds that were planted will bear fruit. But we also have to fix our underlying housing scarcity problem. We’re short 3.5 million homes in California, and it’s pushing a lot of working class people into homelessness, people who don’t have any mental health or addiction problems, but they lose their apartment, and there’s nothing they can afford so they live in their car. And that is a result of 50 years of bad housing policy where we’ve made it hard or impossible to build new housing. That’s the underlying root cause. Financial investments are very important, but there is not going to be enough funding to house every low-income person in California. So we have to solve the structural housing shortage as well.

What actions are most important to take?

There are three major things we need to prevent people from becoming homeless: We need to be protecting renters, so people aren’t getting evicted in no fault evictions and ending up on the street; we need to invest aggressively in helping transition homeless people into housing with support services; and then we have to make structural changes to our housing policy to fix the problem over the long run. That’s what SB 50 is about—my legislation to legalize more housing by jobs and transit, so we can start filling in that 3.5 million home gap.

What do you think of the drama that’s played out with a San Francisco neighborhood putting up boulders on the sidewalk to discourage homeless encampments? [Editor’s note: In September, a group of San Francisco neighbors pooled funds and had boulders installed along the sidewalk to break up a homeless encampment and cut down on reported drug dealing and harassment on the block. Homeless advocates were critical, calling the tactic inhumane; activists and media coverage sparked a barrage of social media outrage and threats against the residents. Last week, the city removed the rocks, but strategic landscaping to deter homelessness is used in other parts of San Francisco and other cities.]

Boulders on the sidewalk are not the solution. But with that said, I don’t think it’s appropriate to demonize these neighbors. I used to represent this area when I was on the [San Francisco] Board of Supervisors, and I’m very familiar with Clinton Park. This was not just about homeless people sleeping on the sidewalk. It was not what pushed these neighbors over the edge. It was the rampant and very dangerous behavior of drug dealing, the violence, the harassment. The neighbors reached the end of their rope, and I can’t criticize them. The city was not meeting their needs, and they took it into their own hands. I was really disappointed to see the really vicious attacks on these neighbors for trying to address an issue in their neighborhood. Again, boulders are not the solution, but I understand why they got to the point where they felt they had no other choice.

“Before a few years ago, California wasn’t doing nearly enough. It’s still not doing enough, but it’s doing more, and I think some of those seeds that were planted will bear fruit.”

In the tent encampments, we need to really focus on transitioning those folks into navigation centers and then transitional housing. Tents on the sidewalk are not a good or safe healthy approach for the homeless or people in the surrounding neighborhood. For people who are engaged in drug dealing and violent behavior, we have to enforce the law.

But then there’s NIMBY resistance to setting up navigation centers like in the Embarcadero. [Editor’s note: After San Francisco Mayor London Breed proposed a navigation center—a type of streamlined transitional homeless shelter— in the Embarcadero neighborhood this spring, residents of the gentrifying SoMa area rallied to block the facility from being built. Their efforts, including raising money against the effort and filing a lawsuit, failed, but were seen as part of the the strong NIMBY (Not In My Backyard) presence in the the Bay Area.]

I actually passed a law this year that streamlines navigation center approvals so we’ll be able to avoid these endless lawsuits and appeals as occurred at the Embarcadero. That will address the NIMBYism that we’re seeing around navigation centers.

A lot of people support services for homeless people, but then they have concerns about putting them in their neighborhood. But what we try to explain to people is that homeless people are in your neighborhood. And so why not have a place where we can start transitioning people into housing and services? It’s better to have navigation centers where people go than people pitching tents on sidewalks. People are going to go somewhere, so let’s have somewhere for them to go where they can begin the process of getting them housed.