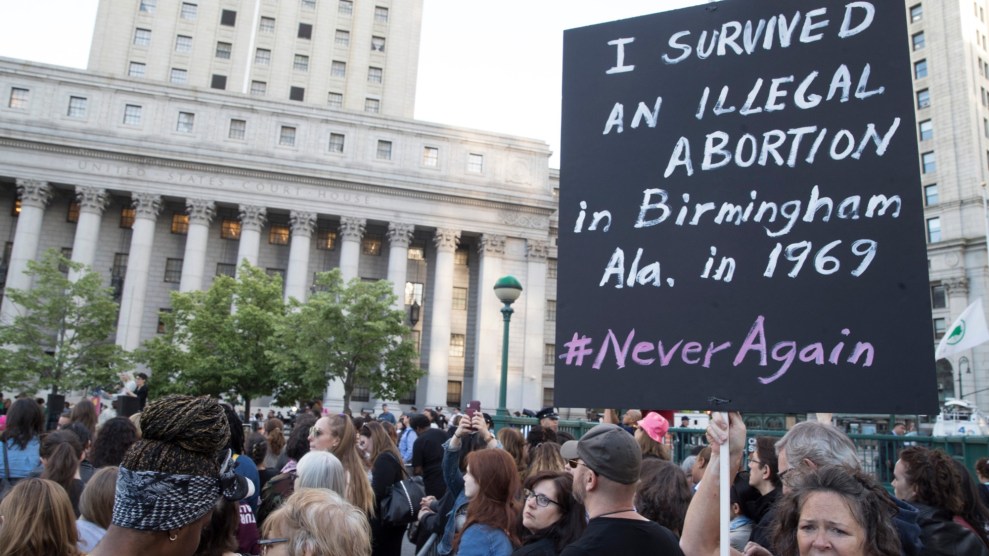 Angela Fremont, who is originally from Alabama, joins a protest against abortion bans on May 21 in New York.Mary Altaffer/AP

A federal judge blocked an Alabama law on Tuesday that would have banned abortions in nearly all cases and threatened providers with up to 99 years in prison for performing an abortion.

Planned Parenthood and the American Civil Liberties Union brought the case on behalf of Dr. Yashica Robinson, a comprehensive women’s health specialist in Alabama, calling it “a blatantly unconstitutional attack on the fundamental right to abortion.”

“This win is critical to our patients and to health care providers like myself,”  Robinson said in a statement. “The abortion care we provide is essential health care, and these ruthless attacks from anti-abortion politicians have no place in Alabama.”

District court Judge Myron Thompson issued the injunction against the Alabama law, which banned abortion at every stage of pregnancy and criminalized the procedure for providers. The law, which was passed in May 2019, included an exception when the mother’s life was in danger but not for cases of rape and incest. Thompson’s decision came after other courts have already blocked similar abortion bans in Georgia, Kentucky, Mississippi, Missouri, and Ohio.

“Once again, the courts have affirmed that we have a right to access safe, legal abortion,” Alexis McGill Johnson, the acting president and CEO of Planned Parenthood Federation of America, said in a statement. “Politicians in Alabama, and across the country, are putting people’s health and lives at risk in their attempts to ban abortion outright in this country,”

The ban, which would have gone into effect on November 15, is just one of many abortion bans passed by state legislatures since the appointment of Supreme Court Justice Brett Kavanaugh. Although none of these laws have been able to go into effect, Republican-led state legislatures hope that by passing laws that directly contradict Roe v. Wade, they can force the Supreme Court to take up a challenge to Roe and potentially get the landmark 1973 ruling overturned.

However, even national anti-abortion groups are skeptical of this strategy, as I reported earlier this month:

Major anti-abortion organizations such as Americans United for Life have openly spoken out against these bans, arguing that they are not the best strategy to roll back abortion access.

“They are not likely to make it to the Supreme Court,” says Steven Aden, chief legal officer for Americans United for Life. “For that reason, we think there are other more productive means of the state expressing its respect for life.”

Steve Marshall, the Alabama attorney general, told the New York Times that Thompson’s injunction was “not unexpected” and will not interfere with the state’s main goal: “to advance our case to the US Supreme Court, where we intend to submit evidence that supports our argument that Roe and [the court’s 1992 ruling in Planned Parenthood v. Casey] were wrongly decided and that the Constitution does not prohibit states from protecting unborn children from abortion.”