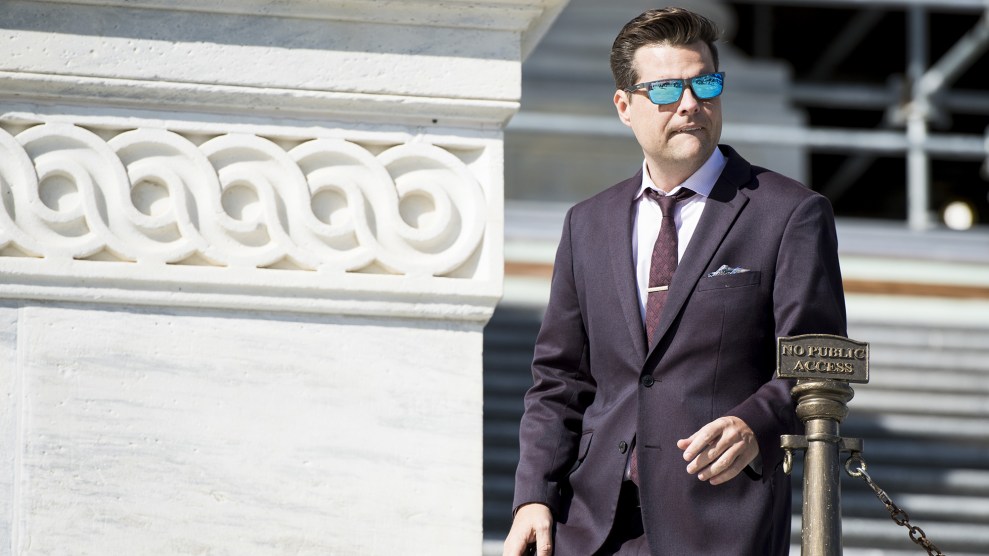 Rep. Matt Gaetz, R-Fla., one of the president's most strident defenders.Bill Clark/Congressional Quarterly via ZUMA Press

On Tuesday the House Judiciary Committee held a hearing to ask federal officials responsible for coordinating election security efforts how things are going. The witnesses—Matt Masterson of the Department of Homeland Security, Nikki Floris of the FBI, Adam Hickey of the Department of Justice, and Ben Hovland of the Election Assistance Commission—represent some of the most active and knowledgeable experts on the subject heading into the 2020 election.

The conspiracy theories’ persistence shows how the president can lob disinformation bombs and expect to find Congressional Republicans willing to validate them.

The hearing came the day after Facebook announced the takedown of four ongoing election disinformation campaigns (three from Iran, one from Russia), and featured testimony from Hovland warning that local officials are outmatched by foreign hackers and that his agency’s budget of $7.95 million—”less than the amount Kansas City spends on potholes”—limits how much they can help.

But even against this backdrop of serious concerns, some Republicans on the committee used their time with the experts to attempt to defend President Donald Trump against revelations linked to the Russian influence campaign that aided his election, and to push a thoroughly debunked conspiracy theory that the hack that targeted the Democratic National Committee either never happened, or was carried out by someone other than Russia.

Rep. Andy Biggs, an Arizona Republican, began by claiming that he’d “love to spend this time talking about election security,” before insisting that the hearing, a follow up panel titled “Securing America’s Elections Part II,” wasn’t about that topic. He soon began railing against impeachment, before Rep. Debbie Lesko, another Arizona Republican, picked up by asking a distracting and misleading question about the Democrats’ computer equipment.

“Looking back at the FBI’s activities investigating the 2016 election, it has been reported that FBI never obtained the original servers from the Democratic National Committee that had allegedly been hacked by Russia, instead relying on imaged copies,” Lesko said. Hickey responded in line with past statements from other government officials who have implied the question is irrelevant, saying the Department of Justice “got the information that we required for our investigation,” while more broadly defending the FBI’s investigation and conclusion the hacks were carried out by Russia, reached with the cooperation of Crowdstrike, a DNC security contractor.

Lesko then asked if Crowdstrike still had “possession of the Clinton servers,” parroting a branch of the president’s conspiracy theory that posits the firm is somehow hiding evidence of who really hacked the DNC and why. “I don’t know what they have possession of now,” Hickey said.

Rep. Matt Gaetz, a Florida Republican and one of the president’s most enthusiastic Congressional defenders, used his time to say Tuesday’s hearing was “about smearing the president of the United States and validating the corrupt people who have been involved in de-legitimizing his historic election.” He then badgered Floris into commenting on former FBI agent Peter Strzok’s affair. Texas Republican Louie Gohmert also focused his questioning on Strzok and purported efforts by Ukrainian officials to influence the 2016 election. He asked whether an FBI-led task force investigating foreign influence operations might “run informants against political campaigns,” a nod to unsubstantiated claims from Trump defenders that President Obama had illegally ordered federal agents to spy on the Trump campaign.

The conspiracy theories’ persistence shows how the president can lob disinformation bombs into the national discourse and expect to find Congressional Republicans willing to validate them, even in the face of all evidence. In the case of Crowdstrike, even Trump’s own advisers “repeatedly warned” the president that the theory was false, according to Tom Bossert, the president’s former homeland security adviser, who told ABC in late September that the theory “is completely debunked” and had “no validity.” He also told the New York Times that he was “deeply disturbed” that the president not only persisted in believing the theory but pressed the Ukrainian government to use it to attack a political rival.

Thomas Rid, a professor of strategic studies at Johns Hopkins University and an an expert on computer security and disinformation who has written extensively on the 2016 Russian hack-and-leak operation and testified before Congress on the matter, has been very critical of the president’s embrace of the Crowdstrike theory. When asked about it coming up during Tuesday’s election security hearing, he was equally disdainful.

“It’s hard to come up with an on-the-record response [to be honest] that doesn’t contain something something expletive-stupid,” Rid told Mother Jones Tuesday. “The server-is-in-Ukraine theory is up there with chemtrails.”