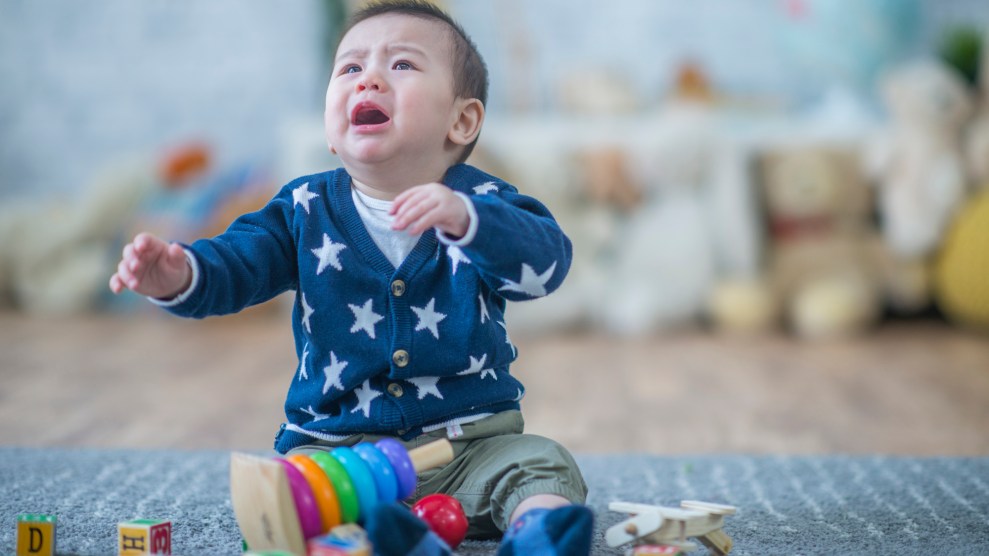 If a Democrat defeats President Trump in 2020, voters could expect the new resident of the White House to move in armed with a series of progressive proposals aimed at helping people find higher-paying jobs. The majority of the 2020 Democratic hopefuls have called for reforms to strengthen union power. Twelve of the Democratic candidates support a Green New Deal, a vision for creating federally backed green jobs. Under a Sanders or Warren administration, four-year public college would be free; community college would be free, regardless of which 2020 hopeful won.

But, pray tell, while Americans are heading back to school or to their unionized jobs, who is going to watch their kids?

It’s a question many of the 2020 hopefuls haven’t made much of a point to answer. So far, only Sen. Elizabeth Warren has put out a full vision for how she’d tackle the issue, with all of the other remaining candidates only discussing the topic in broad strokes. Katie Hamm, vice president of early childhood education at the Center for American Progress, a left-leaning think tank, calls the lack of detailed plans a missed opportunity for candidates to talk about how caring for children fits into their vision for progressive economic reform.

“To have a conversation about the economy and not talk about child care seems like a huge oversight to me,” Hamm says. “It’s not just a budget issue for families—economists have been pretty clear about the fact that our economy could be larger if we had more child care and more parents could enter the workforce.”

Months before Elizabeth Warren was crowned the candidate with “a plan for that,” she was the candidate with precisely one plan: A universal child care proposal that would guarantee care to every child from birth until they start school, all costing no more than 7 percent of their family’s income. This was Warren’s opening bid, the foundation laid for a ceaseless fount of policy proposals that built a case for how decades of government divestment and business-friendly reforms have benefited the wealthy few over the working many.

“To have a conversation about the economy and not talk about child care seems like a huge oversight.”

Warren couched her plan in terms of economic productivity, citing how parents could work more hours and that the nation’s more than 1 million child care workers—paid a higher wage under her vision—would have more money to spend. But she also made a personal appeal that’s become a fixture of her stump speech: Warren almost quit her job as a law professor due to a lack of reliable child care options for her two then-young children, saved only by the fact that her Aunt Bee moved in to help. “Finding affordable and high-quality child care has gotten even harder since my children were growing up—and not everyone is lucky enough to have an Aunt Bee of their own,” Warren noted in a blog post announcing her plan back in February.

Back then, I predicted that she’d effectively thrown down the gauntlet for her fellow 2020 hopefuls. Even if they didn’t accept her precise vision, the existence of such a proposal might pressure other candidates into offering their own specific, aggressive proposals to combat the federal government’s lackluster investment in child care. There was good reason to suspect that would be so: Women, to whom the responsibilities of child care often chiefly fall, had done heroes’ work on behalf of Democratic candidates during the 2018 midterms, by running, donating, and organizing at a scale not seen in recent history.

But that hasn’t really happened. Of the 12 candidates who will be on the debate stage on Tuesday night, only Warren has articulated a precise vision. Others, such as Julián Castro and Bernie Sanders, have voiced support for universal care but have yet to offer details about what their own plans would entail. Meanwhile, Cory Booker, Kamala Harris, and Amy Klobuchar have said they’d support implementing Sen. Patty Murray’s (D-Wash.) bill—which mirrors much of Warren’s plan, but phases out the cap for higher-income families.

That lack of detail hasn’t necessarily hurt candidates, nor has it seemed to help: New York Sen. Kirsten Gillibrand had staked her 2020 run on the issues facing working women, affordable child care chief among them. But she struggled to gain traction and was one of the first Democratic hopefuls to exit the race.

This isn’t to say Democratic candidates aren’t interested in helping working parents address the hurdles of caring for children. Paid family leave has gained traction on the 2020 trail: Harris’ “children’s agenda” proposes six months of paid leave for parents to spend with their newborns, something aimed at providing economic justice for working parents. Nearly all the 2020 Democrats have voiced support for various flavors of universal pre-K for 3- or 4-year-olds. But while all of those are important pieces of the puzzles, they’re not “anywhere close to a child care solution,” CAP’s Hamm tells me. Most notably, many have not articulated what should happen in the two- or three-year span when paid family leaves ends and universal pre-K begins.

According to a recent report from the Center for American Progress, families pay an average of $10,000 per year for full-time care, something that amounts to roughly one-fifth of a median household’s income in the US. In more than half of all states, a year’s worth of child care costs more on average than in-state tuition at that state’s public four-year colleges, a sum approaching the average annual salary of the 20- and 30-somethings who are parents. That burden often falls to women and is even harder for women of color, who are overrepresented in low-wage jobs that are accompanied by unpredictable, nontraditional work schedules. A recent study from the Council for a Strong America estimated that the US economy loses $57 billion a year in revenue, wages, and productivity as a result of child care shortages.

More child care proposals are in the works. Beto O’Rourke’s and Buttigieg’s campaigns tell me they plan to roll out comprehensive plans shortly. Harris’ Senate office confirmed that she’s working on a bill to address some of the gaps in care families face during summer vacations and the misaligned start and end time of schooldays and work days. If past is prologue, we’ll be waiting awhile to see the full scope of what the candidates have to offer: Hillary Clinton didn’t release her child care proposal until May 2016, only two months before the end of the Democratic primary.

But even if candidates do offer clearer visions, don’t expect to hear about them at this week’s debate: So far, only passing seconds of the past five Democratic debates have lingered on child care policy. The only hefty mention came from Gillibrand, who, before she departed the race, called out former Vice President Joe Biden for a 1981 op-ed in which he bemoaned day care centers as “monuments to our growing unwillingness to accept personal responsibility.”