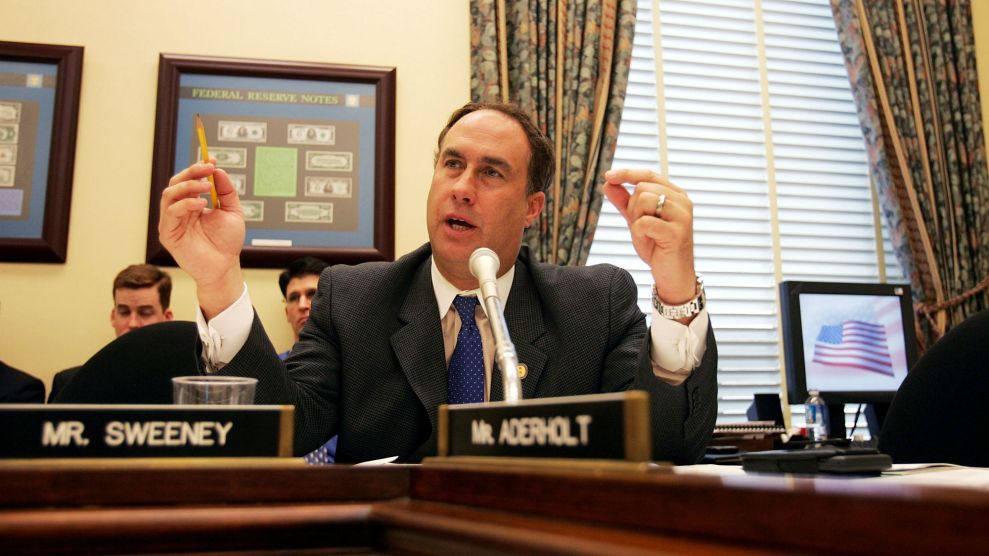 With Congress mulling legislation to slap new sanctions on Russia for its attack on the 2016 American election, an important Russian bank connected to Vladimir Putin’s government has turned for help to a well-positioned lobbyist in Washington: a Trump insider and former Republican House member named John Sweeney. In August Sweeney signed a whopping contract to lobby on behalf of this bank to stave off sanctions from the US government.

The filing says that Sweeney will “engage in meetings and other communications with U.S. government officials regarding potential new sanctions legislation…that could affect” the bank.

The Obama administration sanctioned the bank in 2014 as part of the U.S. response to Russia’s invasion of Crimea. Shuvalov, along with all members of the bank’s supervisory board, was also included on a January 2018 Treasury Department report listing officials closely affiliated with the Russian government. That report, which Congress required Treasury to issue, did not lead to sanctions against those individuals. But the bank could be hurt by pending legislation. Election security legislation proposed by Sens. Marco Rubio (R-Fla.) and Chris Van Hollen (D-Md.) would sanction VEB and other Russian banks. Sanctions legislation proposed by Sens. Lindsey Graham (R-SC) and Robert Menendez (D-NJ), which would bar US firms and citizens from investing in Russian energy projects or participating in ventures that involve Russian government debt, which could harm the country’s ability to finance infrastructure projects. That bill and a separate measure proposed in the House aim at punishing Russia for interfering in the 2016 election.

VEB also had a role in the Trump-Russia scandal. A December 13, 2016 meeting between Shuvalov’s predecessor as the bank’s chairman, Sergey Gorkov, and Jared Kushner, Trump’s son-in-law, was scrutinized as part of former Special Counsel Robert Mueller’s investigation. Disclosure of meeting drew suspicion that Kushner hoped the bank would bailout a debt-laden building, 666 Fifth Avenue, owned by his family. The exact purpose of the meeting remains unclear. VEB claims the meeting was purely business-oriented, related to Kushner’s real estate work. Kushner told Mueller’s office it was diplomatic.

Sweeney was hired to work for Vnesheconombank by the International Centre for Legal Protection, a Moscow entity formed to help Russia and Russian entities enmeshed in complex international legal disputes. The onetime House member will receive $62,500 per month for 12 months for the work, according a contract he filed with Justice Department.

Reached by phone Thursday, Sweeney said he would call back, but he did not. He did not respond to a voicemail or questions sent by text message.

Sweeney represented an upstate New York district from 1999 through 2006, when he was defeated for reelection by Kirsten Gillibrand, now the junior senator from New York. In the final weeks of the 2006 race, Sweeney faced domestic abuse allegations (claims that he has denied). In the years that followed, Sweeney twice pleaded guilty to drunk driving charges. Sweeney stopped drinking and recently announced 10 years of sobriety. He also weathered a federal grand jury investigationinto whether he took official acts while in office to help three clients of an Albany lobbying firm in exchange for “a stream of financial benefits,” according to FBI records cited by the Albany Times Union. He was never charged in that case, which lasted from 2006 until at least 2008.

Sweeney began lobbying the White House soon after Trump took office. In 2017 and 2018 he worked on behalf of the Nord Stream 2 pipeline, a project partly owned by Russia’s state-run gas giant, Gazprom. The pipeline, scheduled to be completed by next year, would transport natural gas directly from Russia to Germany, bypassing Ukraine, which could damage that country’s gas industry. Sweeney’s work, for which he reported receiving $470,000 in lobbying fees, included opposing “potential financial sanctions affecting the project.” Lobbying disclosure forms he filed with Congress say he focused on influencing the “Executive Office of the President.”

Sweeney has also represented Ihor Kolomoisky, a politically influential Ukrainian tycoon who previously controlled a Ukrainian bank seized by that country’s government in 2016 due to purported lack of capital and financial improprieties. In a lawsuit filed in May, the bank sued Kolomoisky and another former owner, alleging that the men forced it to issue loans to entities they controlled and then laundered the proceeds through shell companies that bought up commercial real estate in the United States. The Daily Beast reported in April that the FBI is investigating Kolomoisky, who has assets in the United States, for alleged money laundering and other crimes. (Kolomoisky has denied the allegations.)

Sweeney is among a small group of Trump insiders who have become lobbyists for Russian firms and related interests. Bryan Lanza, a former Trump campaign and transition aide, is now a lobbyist at Mercury Public Affairs, where he has represented  the EN+ Group, an aluminum company founded by Oleg Deripaska, an oligarch close to Putin. Lanza and Mercury helped the company win relief from US sanctions. Brian Ballard, who formerly lobbied for Trump in Florida and has since built a thriving Washington practice, has represented David Yakobashvili, a Russian oligarch with interests in gas and the food industry. Yakobashvili identifies himself as president of the Russian–American Council for Business Cooperation, a group that says it was created at Putin’s behest to boost trade between the countries.