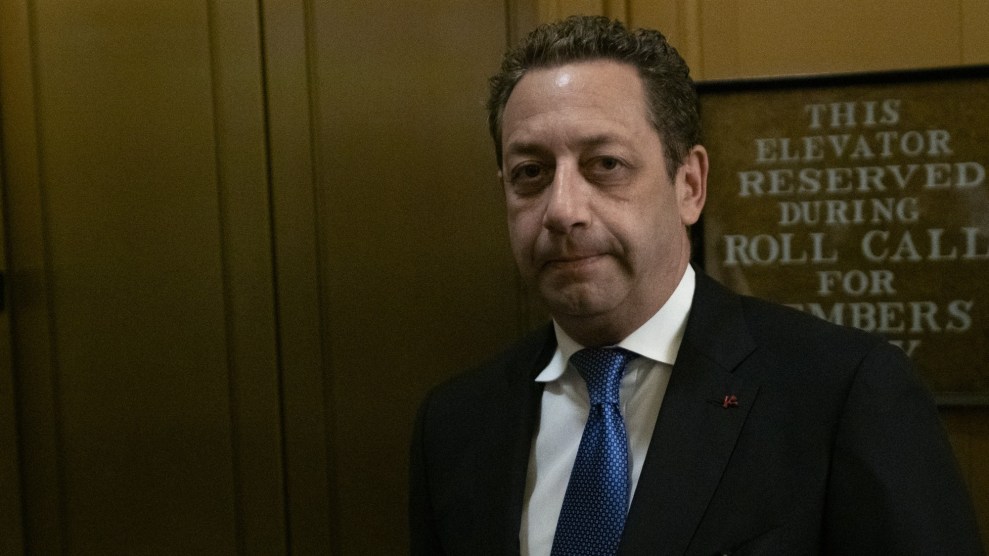 Felix Sater arrives for his closed-door testimony before the House Intelligence Committee on July 9, 2019. Stefani Reynolds/CNP via Zuma

When the Democrats took over the House of Representatives, there seemed to be the promise of vigorous investigations and high-profile hearings related to a long array of Donald Trump controversies, including the Trump-Russia scandal and one particular component of that affair: Trump’s secret effort to score a large project in Moscow while he was running for president. Yet the House Dems, as they debated what to do on the impeachment front, have rarely succeeded in mounting probes and holding hearings on Trump that shape the ongoing (and, yes, often crazy) political agenda of the day, week, or month. And the story of Trump’s covert venture in Moscow—like many other tales of Trump corruption—has drifted from public view. The House Intelligence Committee, though, is still on that case, and it is examining whether a key witness in that investigation, a former business associate of Trump, has tried to obstruct its probe—an allegation this onetime Trump ally fiercely denies.

First, some background. During the 2016 campaign, Trump repeatedly asserted he had nothing to do with Russia. And when he was asked in December 2015 about his relationship with a man named Felix Sater—a former asset for US intelligence and law enforcement in key terrorism and mafia cases who also has a criminal record—Trump lied and essentially denied knowing the guy: “Felix Sater, boy, I have to even think about it. I’m not that familiar with him.”

Yet Trump had worked closely with Sater, a fellow developer, on the Trump Soho, a hotel condominium that opened in 2010 in New York City, and after that Sater had served as a scout for Trump, looking for projects in Russia and elsewhere. Sater even carried a business card identifying him as a Trump Organization consultant. Starting in September 2015, Sater became the middleman in Trump’s latest attempt to develop a tower in Moscow, which had long been a goal for Trump. Collaborating with Michael Cohen, then Trump’s lawyer and fixer, Sater hooked up the Trump Organization with a Russian company for this Moscow deal that could, if successful, reap Trump hundreds of millions of dollars. Trump himself signed a letter of intent for the project in October 2015. In emails to Cohen, Sater maintained that this deal could help Trump win the 2016 election.

The gargantuan venture certainly could not have succeeded if Russian President Vladimir Putin and his regime felt unkindly toward Trump. So Trump, as he campaigned, was in no position to speak critically of Putin or his government—that is, if he gave a damn about this project. And indeed Trump often gushed positively about Putin and refused to endorse criticism of the Russian leader (who, as it turned out, had ordered a clandestine attack on the American election in part to help Trump). In January 2016, Cohen even contacted Putin’s office for help on the project and spoke to an assistant to a key Putin aide about the venture. Cohen and Sater also considered giving Putin a $50 million penthouse in the tower to lure Russian oligarchs to buy into the project.

The Moscow tower project eventually fizzled out in mid-2016, as Trump neared winning the GOP nomination. Yet Trump never disclosed these negotiations to the public. He kept saying he had no interests in Russia and that he was an America First kind of candidate—not a pol who pursued a clandestine business deal that could not proceed if he criticized a foreign adversary. And after the election, once Trump’s private negotiations for this project had become public, Cohen lied to the House and Senate intelligence committees about the Moscow deal, falsely claiming that he had cut it off in January 2016  and that he had not spoken to Putin’s office about it. Cohen later admitted to special counsel Robert Mueller he had misled congressional investigators, and that’s one reason he is currently residing in a federal facility in upstate New York.

Sater, too, has been questioned by the House Intelligence Committee—twice. Both times were private sessions. The committee so far has chosen not to hold a public hearing with Sater. In fact, there have been no public congressional hearings dedicated solely to Trump’s secret Moscow deal, though Cohen did appear before the House Oversight Committee in February and testified that Trump had indirectly encouraged him to lie to congressional investigators about the project.

Sater tells Mother Jones that he has no objection to releasing the transcripts of his two sessions with the intelligence committee. And, he adds, he would like to testify publicly. Such a hearing could be explosive, if it places in the spotlight the secret negotiations Trump held for the Russian project as he ran for president. (Some Democrats have noted they have questions about Sater’s credibility—though there is no doubt about the fundamental elements of this episode: Sater spent months working with Cohen to broker this deal for Trump. And Sater has handed over to the committee records related to this project. )

Asked whether the House Intelligence Committee would release the transcripts of its sessions with Sater, a committee staffer provided this statement: “Mr. Sater still has not fully cooperated with the committee in providing documents we believe to be in his possession, and he remains under subpoena until he fully complies. We plan on releasing Mr. Sater’s transcript once that thread of our investigation is completed.” And this staffer adds, “We are still actively pursuing a number of open questions, including whether Mr. Sater played a role in assisting Michael Cohen to obstruct the committee’s investigation.”

This suggests that Sater is on the hot seat and possibly a target of the committee’s investigation. But Sater and his lawyer, Robert Wolf, deny he has withheld information, maintaining he has cooperated fully. In a statement sent to Mother Jones, Wolf says:

Over a month ago Mr. Sater completely produced all responsive documents requested by the subpoena and fully complied with the Committee’s July 30, 2019 letter requiring those documents be unredacted. In that same letter the Committee said they would address in separate correspondence Mr. Sater’s prior objections based upon attorney client privilege. However,  no further correspondence has been received from the Committee in the last six weeks addressing the privilege objection. Nor has the Committee disputed the completeness of Mr. Sater’s production.  In fact, there have been no communications whatsoever with the Committee since July 30th and obviously there have been no open questions directed to Mr. Sater.

Responding to Wolf’s assertions, the House Intelligence Committee staffer insists the previous statement “still is accurate” and says, “We have nothing additional to add.”

From the outside, it’s tough to determine the details of the conflict between Sater and the committee. But one thing is certain: The story of Trump’s secret dealings in Russia and the grand deception he pulled off about it during the 2016 campaign is more important than this dispute. That is a tale that still deserves the amplification and attention that congressional scrutiny and hearings can provide.