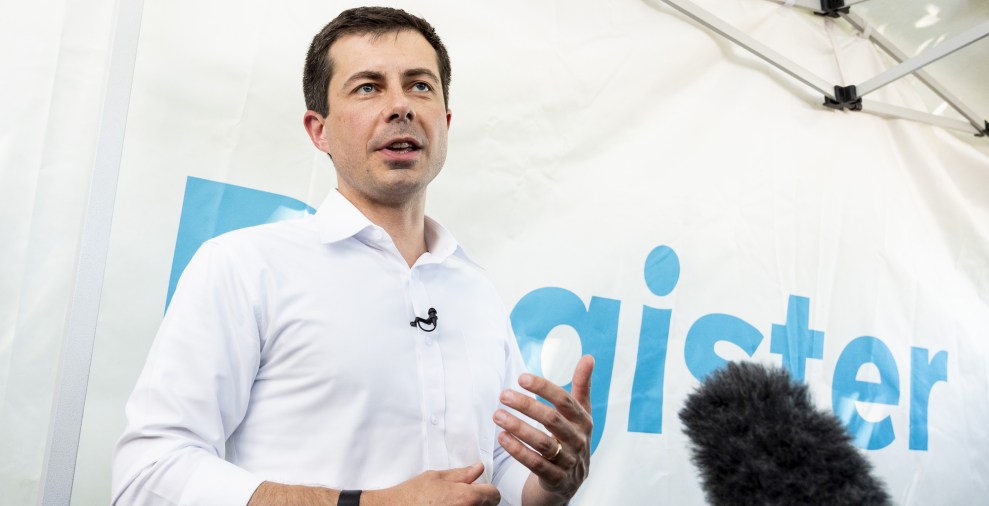 Pete Buttigieg wants Americans to understand that the climate crisis isn’t only about encroaching seas and shrinking glaciers—it affects everything and everyone in between.

“Too often, I think our imagination around climate change is confined to the North and the South Pole, but I see it happening right in the middle of America.”

“Too often, I think our imagination around climate change is confined to the North and the South Pole, but I see it happening right in the middle of America,” the South Bend, Indiana mayor said in an interview Wednesday from his hometown in a brief break from the presidential campaign trail. The day before, Buttigieg unveiled a plan targeting natural disaster response on a campaign trip to Conway, South Carolina, which was devastated by Hurricane Florence in 2018.

When the 37-year-old Democratic presidential candidate arrived for an interview with Climate Desk and The Weather Channel at the edge of a serene section of the St. Joseph River, the changing climate was on his mind. In February 2018, the slice of land that he stood on had been completely submerged from a record mix of rain and snow; the river rose by more than 12 feet, flooding the homes that border it.

Last year’s storm surge was certainly unlike anything South Bend’s residents remember—floods of that magnitude have a one in 500 chance of occurring in a year. But South Bend has seen two of these events—one of them a 1000-year flood—since 2016.* Heavier downpours stress old city water infrastructure and sewage systems. That’s just one way in which climate change threatens the Midwest, according to the National Climate Assessment.

It was South Bend’s recent floods that inspired Buttigieg’s climate plan. “One thing we’ve learned from recent disasters—including the place we’re sitting right now—is that there is a complex overlapping bureaucracy when it comes to getting disaster relief,” he said. “The last thing you want somebody to have to do when they’ve been put out of their homes by a disaster is have to navigate all these different agencies to get help.”

“Thirty years from now,” said Buttigieg, climate change “can be the dominant fact of American life.”

Buttigieg says he has a plan to fix that in his first 100 days in office by setting up a Disaster Commission that coordinates local and federal response to extreme weather events. And his climate strategy emphasizes collaboration between Washington and individual communities. The first of his climate plans, an 18-page $2 trillion plan that endorses the Green New Deal, proposes an AmeriCorps-style volunteer Climate Corps, federally issued World-War-II-style bonds for climate change and renewable energy projects, and regional “resilience hubs” that would work together with a new clean energy bank to loan funds for new technology and infrastructure projects.

Buttigieg’s timelines and investments for hitting zero pollution in the major sectors are not quite as aggressive as his competitors’. He aims to achieve net zero emissions by 2050, with goals along the way to double clean electricity by 2025, clean up new cars by 2035, followed by trucks the following five years. By comparison, Bernie Sanders, who described his climate plan in an exclusive interview for the Climate Desk and Weather Channel series, has the same 2050 goal, but claims he can clean up transportation—currently the biggest source of pollution—by 2030.

Buttigieg also embraces two policies that have lost some popularity among the environmental left (and Sanders): He supports carbon capture and storage, and he plans to slap the fossil fuel industry with a carbon tax, repaid as a dividend for taxpayers.

“For me the idea [of a carbon tax] is about making sure our prices more accurately reflect the true cost, including the cost to our own future, of things like fossil fuels,” he told CityLab’s Sarah Holder. “The beauty of the carbon tax and dividend is it does a lot of that work in terms of realigning the signals in our economy.”

Buttigieg will take the stage at MSNBC and Georgetown University’s climate town hall on Friday, while youth plan to hold school strikes around the country that day calling for swift action on the climate crisis. As the youngest candidate in the race, he’ll know in his lifetime whether the United States heeds their demands.

“Thirty years from now, this can be the dominant fact of American life,” he said. At that time, when Buttigieg will be in his sixties, some communities could already be unlivable. For evidence, he pointed to Cedar Rapids, Iowa, which faces extreme heat and flooding.

Climate change “could be holding back opportunities for a new generation, transforming and destroying our economy. The way I would prefer to envision climate change is as a major national challenge that we rose to as a national project, led the world in doing it, and stood taller because we did it.”

Correction: An earlier version of this story misstated the year Buttigieg became mayor. He has been mayor since 2012.