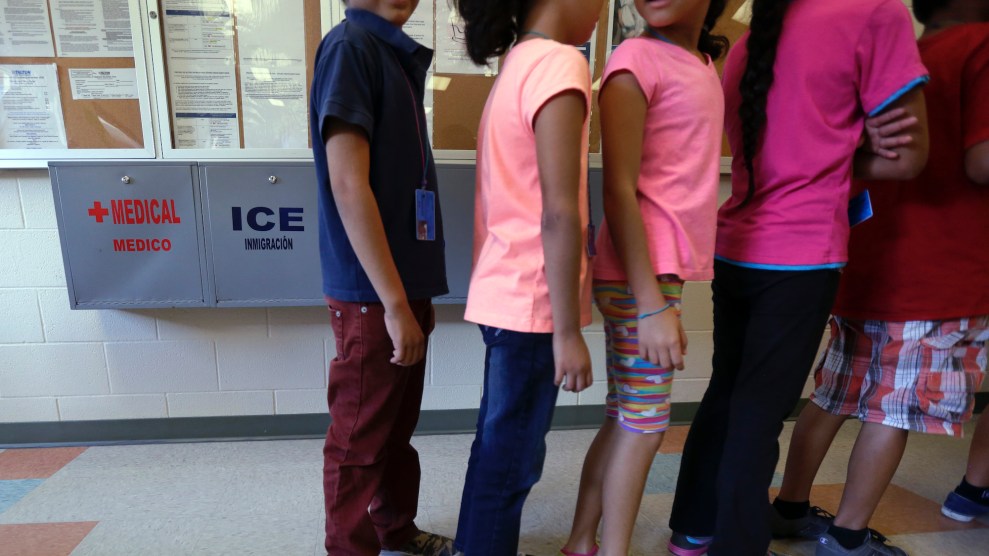 Detained immigrant children line up in the cafeteria at the Karnes family detention center in Texas in 2014.Eric Gay/AP

In April, after starting a new system of sending asylum seekers back to Mexico to wait for their US court dates, the Trump administration received a familiar piece of news: A judge in California was blocking the policy. It was the latest loss in a string of legal defeats that made President Donald Trump appear powerless to stop families from crossing the border in record numbers.

Four months later, following unexpected court victories and bullying of government leaders in Mexico and Guatemala, the president now has far more authority to practice his brand of border cruelty. On Wednesday, the Trump administration rolled out the last major piece of that crackdown: A regulation that would allow Immigration and Customs Enforcement to detain families indefinitely, instead of the current legal limit of about 20 days. The rule is set to go into effect in October and would lead to families spending months, if not longer, in family detention centers.

Department of Homeland Security officials under Barack Obama and Trump have argued that detaining families who cross the border together is necessary for deterring people without strong asylum claims from crossing in large numbers to find work or reunite with relatives. But since the 2015 court ruling that created the 20-day limit, families have usually been quickly released after seeking out Border Patrol agents. Adults who cross the border can already be subjected to indefinite detention and increasingly are under Trump.

At the Karnes City facility, which is now facing a complaint alleging sexual abuse, extortion, and harassment by guards, women reportedly had to carry their infant children incessantly—no crawling was allowed. Many children were depressed and lost weight. Jesse Lloyd, an attorney who has spent time at Artesia, told me that one three-year-old stopped eating solid food because he couldn’t process the institutional fare. ICE officials wouldn’t let seven-year-old Nayely Bermúdez Beltrán leave the Karnes City detention center to see a doctor, despite a malignant brain tumor that required immediate treatment.

The new rule may be blocked by Dolly Gee, the Los Angeles district court judge who wrote the 2015 decision that created the 20-day limit, as well as the Ninth Circuit Court of Appeals judges above her. Gee’s 2015 decision was part of the ongoing enforcement of the Flores settlement agreement created in 1997 following severe mistreatment of migrant children in US custody. Now, the Trump administration is arguing that it can effectively police itself after withdrawing from the Flores agreement. Gee is likely to be skeptical of that claim. But even if the rule is blocked, the Trump administration will still have far more ability to stop asylum seekers than it did just a few months ago.

After ending its family separation policy in June 2018, the Trump administration generally released families stopped at the border after a few days. As cases moved through backlogged courts, parents could start working immediately without authorization or wait about six months to get a work permit that remained valid as long as asylum cases were ongoing, a process that can take years to resolve. The increasing awareness in the “Northern Triangle” countries of El Salvador, Guatemala, and Honduras that traveling with one’s child made it much easier to get into the United States—combined with ongoing gang violence, deep poverty, and a sense that Trump could close the border at any minute—led to an unprecedented boom in family migration, with nearly 85,000 family members crossing in May.

Democrats in Congress had no interest in heeding the Trump administration’s call for legislation that would allow for indefinite family detention. Judges blocked most of the administration’s unilateral actions. Trump had few obvious options for reducing migration—until an unexpected decision from a California court he loves to attack.

On May 7, the normally progressive Ninth Circuit Court of Appeals overturned a San Francisco district court judge’s decision to prevent the Trump administration from forcing asylum seekers to wait in Mexico. More than 30,000 people have now been sent back under the Remain in Mexico policy. They are forced to wait in some of the world’s most dangerous cities and hardly any have been able to find legal representation. Far more people have been impacted by Remain in Mexico than the Zero Tolerance family separation policy, but it has received relatively little mainstream attention.

The Trump administration has been able to send so many people back to Mexico because Mexico fears Trump’s late-May threat to impose tariffs. Aside from taking asylum seekers sent back from the United States, Mexico is deporting far more Central Americans before they even reach the US border. Although the total remains high, the number of people crossing the US-Mexico border dropped by nearly 50 percent between May and July.

Another Trump tariff threat helped force Guatemala’s outgoing president Jimmy Morales to agree on July 26 to sign a “safe third country” agreement. If the plan is implemented, it will force asylum seekers who pass through Guatemala on their way to the United States to seek protection in Guatemala. That would let the United States dump asylum seekers from all over the world in Guatemala, since thousands of asylum seekers fly to South America before traveling north over land. Incoming president Alejandro Giammattei, who takes office in January, has said Guatemala is in no position to serve as a safe third country, but it is unclear if he will be in a position to reject it.

Earlier in July, Trump tried for a second time to effectively ban asylum at the southern border after a similar plan was blocked in November 2018. The July rule makes people ineligible for protection if they come to the US-Mexico border by land, which is many asylum seekers’ only option because US visas are often impossible to obtain. The policy flouts the plain text of US immigration law and, as expected, a California judge quickly blocked the plan. But on Friday, the Ninth Circuit overturned a lower judge again, deciding that the asylum ban can go into effect outside the Ninth Circuit. The decision means that, at least for now, people who cross the border in New Mexico and Texas can be quickly denied protection and deported.

The prospect of being stopped by Mexican officials; the partial asylum ban; Remain in Mexico; and the potential for being sent to Guatemala will all dissuade many families from attempting the journey north. The Trump administration hopes as few people as possible make it through that gauntlet and into the United States. But if they do, the Trump administration wants to make sure people spend that time in detention. That is what Wednesday’s family detention rule aims to achieve. It is the last link in a long chain.