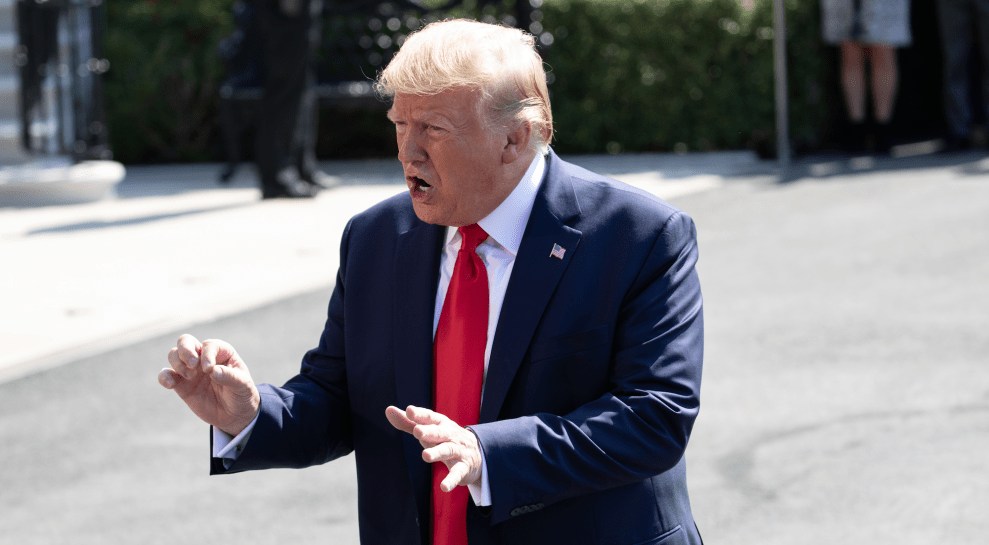 President Donald Trump emerged from vacation at his golf club in Bedminster, New Jersey, on Tuesday and immediately resumed fueling unfounded conspiracy theories connecting the Clinton family to Jeffrey Epstein, the disgraced financier who died of an apparent suicide in a Manhattan jail cell on Saturday.

While he said that he didn’t know for certain whether the Clintons were behind Epstein’s death, Trump seized on reporters’ questions to launch into theories about the number of times former President Bill Clinton flew on Epstein’s private jet.

“Bill Clinton, who was a very good friend of Epstein’s, he was on the plane about 27 or 28 times,” Trump told reporters, a clear nod to the baseless accusations surrounding the Clintons in the wake of Epstein’s death. “So why did he say four times?”

He continued with a reference to a private Caribbean island owned by Epstein. “The question you have to ask is, did Bill Clinton go to the island?” he asked. The FBI raided the island, which locals reportedly nicknamed “pedophile island,” on Monday.

“That was not a good place, as I understand it,” Trump said. “But I was never there.”

The remarks come two days after Trump retweeted a conspiracy theory implicating the Clintons in Epstein’s sudden death, which included the hashtags #ClintonBodyCount and #ClintonCrimeFamily. Speaking to reporters Tuesday, Trump defended the retweet, claiming that it was first posted by a “highly respected conservative pundit.” There is no evidence that Terrence K. Williams, the owner of the account Trump retweeted on Saturday, is prominent in conservative groups. His Twitter bio describes himself as an “Actor. Comedian. Commentator.”

President Trump just spoke about me when asked about retweeting my video. Thank you @realDonaldTrump for the kind words. They are going crazy over a retweet because they have nothing else to complain about since the Russia HOAX is over!

I can’t wait to meet you Mr. President pic.twitter.com/borlqCjuf4

The president’s efforts to align his political enemies with Epstein—who last month had been indicted on federal charges of sex trafficking minors, some as young as 14—could also be viewed as an attempt to distance himself from the billionaire. The two men were known to socialize together in Palm Beach, Florida, and Trump once praised Epstein as “terrific.”

Newly unsealed documents show that Trump flew on Epstein’s private plane at least once in 1997. In a statement following Epstein’s indictment last month, a spokesman for Clinton said that the former president had flown on Epstein’s airplane four times. Trump appears to have gotten the “27 or 28” number from conservative news sites.