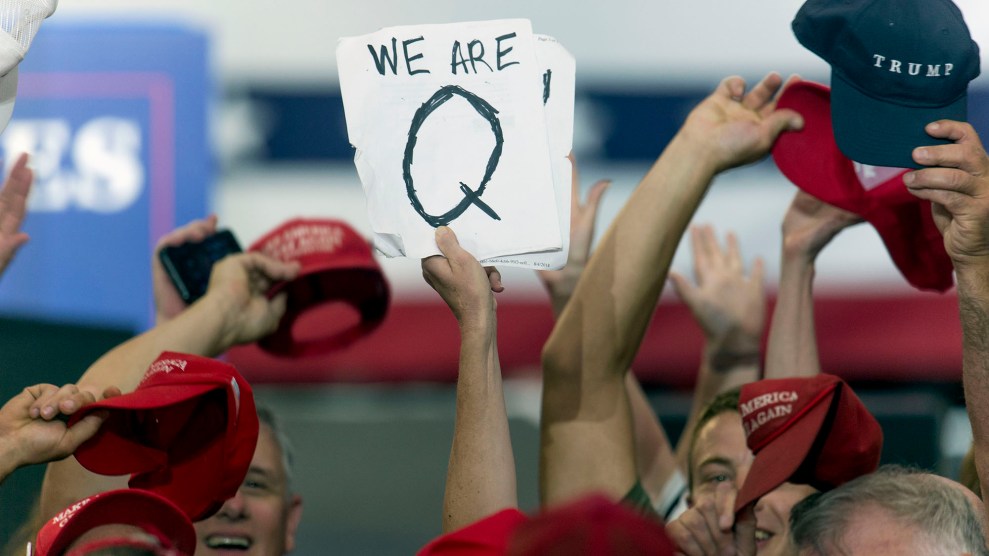 The infamous imageboard 8chan went off the internet last week after a white-supremacist shooter killed 22 people in El Paso, and a manifesto he’d written was posted on the site. It was the third time in under five months that a racist shooter’s writing or media had appeared on the imageboard.

While critics of 8chan had called for it to be banned following the previous two shooters, after El Paso, Cloudflare, an internet company that protects websites from attacks, finally decided to cut service to the site. Other security or technology providers followed suit, effectively removing the site from the open web for its deadly record of racism, bigotry, and white supremacy.

But 8chan’s disappearance also inadvertently dealt a blow to the QAnon conspiracy community.

As long as the site is effectively offline, QAnon won’t be able to post.

For about two years, a person or group of people have been posting, first on 4chan and then later on 8chan, under the single-letter moniker of “Q,” claiming to be a high-level government official with knowledge of Trump’s plan to take down the “deep state”—the entrenched careerist bureaucrats of America’s intelligence community—and to blow the lid off a massive pedophile ring being run and abetted by elite liberals. No one actually knows who Q is, but the account’s often cryptic posts are known as “Q drops,” providing clues about an impending “Storm” when liberals will be rounded up in mass arrests.

There’s no evidence to give any of this credence. While Q has frequently made incorrect predictions, devout followers of the QAnon movement still eat up the posts, and spread their content far beyond the message board. QAnon supporters have spun out an entire internet ecosystem in support of the conspiracy, featuring groups on 8chan, hundreds or possibly thousands of hours of Q content on YouTube, and widely followed pro-Q Twitter accounts. Former Trump aides have breathed life into the conspiracy, including short-lived White House communications director Anthony Scaramucci. Trump himself has retweeted accounts that have promoted the conspiracy, and a recent Trump campaign ad featured QAnon signs displayed by attendees at one of the president’s rallies.

It’s unclear how long 8chan will stay down. After Cloudfare stepped aside, the site’s administrators tried, but failed, to find another company to protect it from web attacks. Jim Watkins, 8chan’s owner, has said he will keep 8chan down voluntarily and not try to revive it until he speaks with Congress, which has subpoenaed his testimony.

But as long as the site is effectively offline, QAnon won’t be able to post the usual Q drops. While Q could go back to 4chan or post elsewhere, there would be no way for followers to know the poster is the same person (or people) it was before. On 8chan, Q posted under a unique ID, or tripcode, that showed the posts were coming from the same account. Without the 8chan ID, there’s no reason to believe that whoever is claiming to be Q actually is. And many people already have.

Even if Q never posts a drop again though, the elaborate conspiracy theory has already built an enormous and self-sustaining following. “QAnon will outlive Q, even if there isn’t another drop,” says Travis View, an independent conspiracy theory researcher who has closely followed QAnon.

View cited the historical precedent of large movements that persisted past their founders. “Scientology is based on the writings of L. Ron Hubbard, but his 1983 death didn’t mean the death of Scientology. It’s still an international religion that’s possibly worth over a billion dollars,” he said, adding, “The Apostles only found their evangelical zeal after Jesus died.”

Those comparisons might sound absurd, but many of Q’s followers track the movement with religious intensity. New contradictory details or incorrect predictions don’t often change the minds of Q adherents, who push each other to “trust the plan”—a common QAnon phrase—with absolute blind faith.

While 8chan being offline may curb the spread and virulence of online white supremacy, it has in some ways played into QAnon theorists’ hands. Members of the Q community, well used to making evolving events comport with their existing worldview, have alleged that 8chan going down is a part of a media plot to knock out Q.

Q’s followers track the movement with religious intensity, pushing each other to “trust the plan.”

“Enemy media attacking 8chan daily, contriving fake narratives of violence and terror. They will use their manufactured guerilla attacks against the people to create false links to Q, in the hope they can deter the public from learning the truth,” wrote Joe M, a prominent QAnon tweeter, shortly after the Poway, California synagogue shooting, in which the killer posted to 8chan before his massacre. Joe M, who has 141,000 followers, tweeted a similar message after the Christchurch mosque shootings in New Zealand in March.

Another popular Q supporter on Twitter, Lisa Mei Crowley, made similar accusations that 8chan had been smeared after the El Paso shooting: “They’re so desperate to keep Q silent by planting ‘manifestos’ of mentally unstable… shooters on 8chan (resulting in infrastructure services dropping 8chan) that they’re STILL doing it even though the site has been down for the past week. Pathetic bunch they are.”

While QAnon’s elaborate system of beliefs has mostly grown out of interpreting the Q drops on 8chan, the community has adopted narratives independent of Q. There is a persistent and pervasive theory among some factions of Q supporters that John F. Kennedy Jr., who died in a 1999 plane crash, is still alive, even though Q directly said in an 8chan post that this isn’t true. Such beliefs suggest the conspiracy movement could continue, absent the original Q poster or posters.

Even if 8chan is unavailable, the QAnon movement long ago moved beyond the niche community of message boards, establishing substantial presences on other social media platforms. “How many people are actually going to 8chan for the original posts in the first place?,” asks Ben Decker, who runs Memetica, a media and tech investigations consultancy, and who has kept close tabs on the QAnon community. “These Q people, they’re in the Telegram channels. They’re in the Facebook groups. They’re on VOAT threads. 8chan being down just means they’re crossing one platform off what they would be checking every day.”

As long as Q is absent, Decker and View expect QAnon’s narrative will be thrown into the hands of internet personalities like Crowley and Joe M, who, after accruing massive followings by keeping up with the conspiracy, now have the power to sway the movement’s course.

“With Q silent, the biggest QAnon promoters will fill in that leader vacuum. They won’t provide the cryptic drops, but they will decide which conspiracy theories are canonical and which ones are heretical,” View says. “If anything, this opens up the opportunity for people to weaponize it further.”