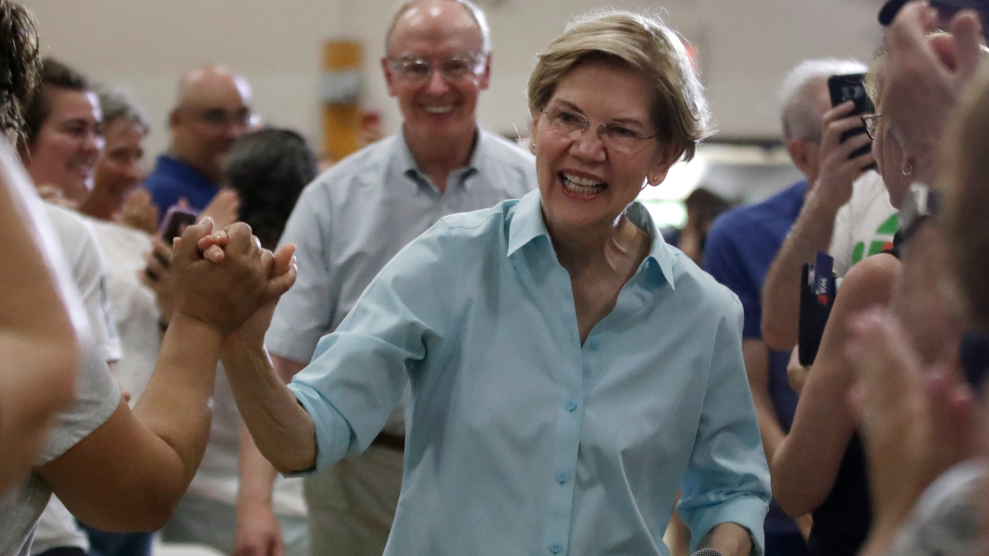 On Tuesday, Rep. Deb Haaland, one of two Native American women in Congress, announced that she was endorsing Sen. Elizabeth Warren for President. Calling the candidate “a great friend to me and a great partner for Indian Country,” Haaland highlighted Sen. Warren’s advocacy for working families and attention to the issue of missing and murdered indigenous women. It was one of several endorsements the Warren campaign picked up ahead of Tuesday’s Democratic presidential debate. But Haaland’s endorsement was especially notable given Warren’s controversial history with Native Americans and the fact that the senator has yet to sign on to a Native-focused presidential forum happening later this month.

“What the hell,” says one of the most liked comments on Haaland’s Instagram post announcing the endorsement. “[Warren has] made her career by trivializing who we are for her own gain.” The commenter, a Native whose sentiment is echoed by many other replies, is referring to Warren’s contentious claims of possessing indigenous heritage.

For decades, the senator touted a “family story” about having Cherokee ancestors, even going so far as to identify herself as American Indian when she registered with the State Bar of Texas in 1986. After President Trump repeatedly mocked her as “Pocahontas,” Warren tried to legitimize her claims by taking a DNA test last October. But in the eyes of many Natives, she was missing the point.

“Using a DNA test to lay claim to any connection to the Cherokee Nation or any tribal nation, even vaguely, is inappropriate and wrong,” said Cherokee Nation Secretary of State Chuck Hoskin, Jr. in a statement at the time. Regardless of the small fraction of Native ancestry that her test results suggested, Warren is not an enrolled member of any tribe, and no indigenous community claims her as one of their own.

Kim Tall Bear, a Sisseton-Wahpeton academic who wrote a book on DNA and tribal belonging, voiced a concern felt by many Natives that Warren was furthering a tradition of white settlers who “donned and absorbed Indigenous images and histories even while massacring and starving actual Indigenous people.” Warren apologized to the Cherokee Nation for the DNA test earlier this year.

Some Natives may be ready to forgive her, concurring with Haaland’s claims about Warren’s positive track record on matters related to Indian Country. “It doesn’t have to be in your blood to understand Native issues and try to make a better life for Natives,” OJ Seamans Sr., an executive director of Native voting rights group Four Directions, tells Mother Jones. “I think she as a US Senator has done everything that she could to make improvements on Indian reservations and better the lives of Natives throughout the United States.”

Warren cosponsored Savanna’s Act, which aimed to create a federal response to violence against indigenous women, and recently introduced bills concerning suicide prevention and child abuse in Native communities. A spokesperson for the Warren campaign says that the senator is currently working with Rep. Halaand on a bill that will “protect tribal sovereignty and make investments in Indian Country.” On the other hand, some Natives have criticized Warren for waiting several months to speak out in favor of Dakota Access Pipeline protestors, who faced a militarized police response on the Standing Rock Reservation in 2016.

Seamans and Four Directions are hosting the first ever presidential candidate forum on Native American issues, which will take place August 19-20 in Sioux City, Iowa. Several Democratic presidential hopefuls have already committed to attending the forum, including Sen. Bernie Sanders, Montana Gov. Steve Bullock, author Marianne Williamson, Rep. John Delaney, and former Housing Secretary Julián Castro. Seamans, who is Sicangu Lakota, says he is “hopeful” that Sen. Warren will also sign on to participate. A spokesperson for Warren’s campaign tells Mother Jones that they “are exploring whether it will be possible for her to attend the forum.”

But not everyone agrees with Seamans and Haaland. Many Natives took to Twitter to express skepticism of Haaland’s endorsement:

Intresting, I hope Warren attends the Native Election forum and discusses how she will serve Indian Country with such important endoresments. https://t.co/MmIR6KUeNQ

Miss Deb,,,,,,, I really love you, but this is so dissapointing. You are indigenous, you should know how harmful Warren is to Indian Country. This is so sad to see when there are much better candidates that will actually help Indian Country. https://t.co/kyoBBSczJN

No she is not a friend to Indian Country. She was vocal on NoDAPL when it was convenient. She falsely claimed NTV Identity, now the entire world has a misconception on NTV identity & put tribal sovereignty on jeopardy. You have chosen the oppressor & a colonizer over ur own ppl.

"Indian Country is intrigued about the endorsement." Me too. Do I detect a bit of humour in @IndianCountry reporting? I'll go with that reading. Includes an incisive tweet by @pollysgdaughter, the expert on Warren's genealogical fakery. https://t.co/ejqUonrlAq

She's not Cherokee so the fact our identity is repeatedly stolen and used for personal gain by people probably doesn't bother her much though the $300 mil in gov contracts to white ppl pretending to be Cherokee should show why Warren & false claims are a problem.