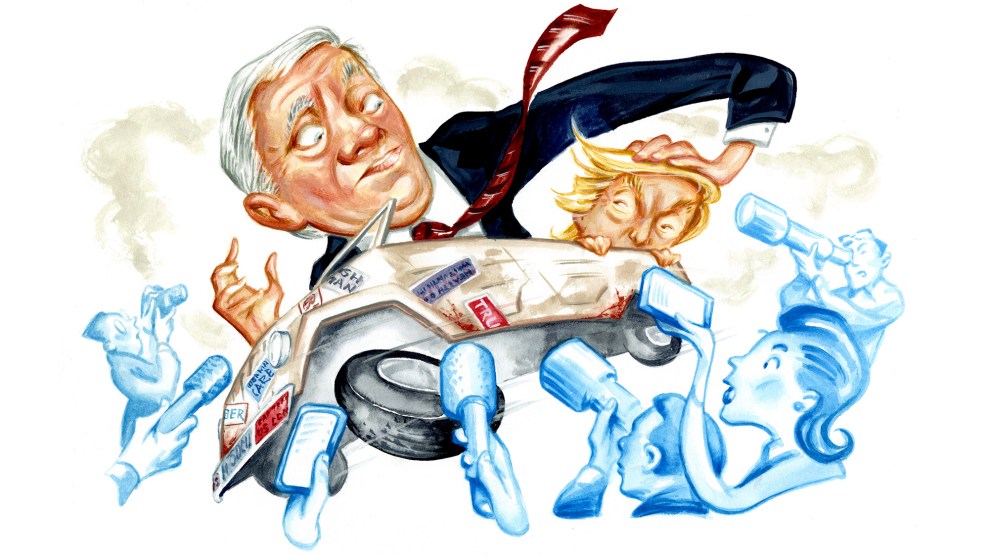 Richard Burr was contrite. It was late February 2017, and the Washington Post had just exposed the North Carolina Republican and chair of the Senate Intelligence Committee for running damage control for the Trump administration over its mounting Russia scandal. Along with Rep. Devin Nunes (R-Calif.), his counterpart on the House Intelligence Committee, Burr had spoken to reporters at the behest of the White House to rebut reports that the Trump campaign had repeated contact with Russian intelligence operatives.

The combative Nunes made no apologies for his efforts to shield the new president from scrutiny. But Burr was different. He immediately moved to address the criticism. At a closed-door meeting with intelligence committee members days after the story broke, Burr acknowledged he had made a mistake. He pledged to avoid future missteps that could raise questions about the independence of his committee’s probe into Russian interference in the 2016 election.

“I hope they don’t put me on the intelligence committee. It’s hard enough to sleep at night the way it is.”

That message quelled complaints by Democrats and some Republicans on the panel. Since then, Burr has kept Democrats on board, in particular the committee’s vice chair, Sen. Mark Warner (D-Va.), making the intelligence committee the lone congressional panel conducting a bipartisan investigation into Trump’s Russia ties. That is no small accomplishment, given the opposing pressures Burr faces: Trump’s aggressive opposition to any probe, and Democratic demands for a more intensive investigation. Burr has “handled it very well,” says Sen. Angus King (I-Maine), a member of the committee.

Others differ. Sen. Ron Wyden (D-Ore.), an intelligence committee member, says the panel should hold more public hearings—something Burr has declined to do—and is moving too hastily to finish up the probe. “There’s a lot of work to do before the Senate Intelligence Committee proclaims mission accomplished on its Russia report,” he notes. Burr has led an investigation credible enough to draw attacks from the right. But an examination of his time running it suggests he hasn’t tried all that hard to expose wrongdoing by Trump and his minions. And as the committee’s probe nears its conclusion—the panel could issue its report on the Trump campaign’s Russia contacts as soon as this fall—it’s worth considering whether Burr is just playing a longer game than Nunes and company.

In 2004, Burr, then a five-term House veteran, was locked in a tight race for the Senate seat vacated by Democratic vice presidential candidate John Edwards. Paul Shumaker, Burr’s longtime campaign strategist, recalls the senator-to-be making a telling comment as the networks called the race in his favor on election night: “I hope they don’t put me on the intelligence committee. It’s hard enough to sleep at night the way it is.” Three years later, Burr, who had served on the House Intelligence Committee, was named to the Senate intelligence committee. By 2015, he was its chair.

Yet Burr is anything but laid-back when it comes to media coverage and public criticism. Burr reportedly once climbed out a window with his dry cleaning to evade reporters. And during Burr’s 2016 reelection race, his campaign tried to limit coverage of his events by refusing to give the Raleigh News & Observer, one of his state’s largest papers, information about his public appearances. Burr’s office declined to comment on several specific questions from Mother Jones.

Burr’s apparent reluctance to join this high-profile Senate panel, whose members are privy to top-secret information their colleagues are not, reflects a political identity that distinguishes him from the nakedly ambitious type A personalities who dominate the upper chamber. A former sales manager for a lawn-equipment company and distant relative of Aaron Burr (who famously killed Alexander Hamilton in a duel), the 63-year-old often strolls through the Capitol in shirtsleeves, his jacket draped over one shoulder, wearing loafers without socks, with a slight smirk on his face. His breath sometimes carries the odor of Skoal. He’s famous for driving around Capitol Hill in a battered 1974 Volkswagen Thing covered with campaign bumper stickers, the top down in all weather. A former defensive back on Wake Forest’s football team, he projects the nonchalance of a college jock turned Chamber of Commerce Republican. One of Burr’s former college teammates, Rep. Charlie Crist (D-Fla.), says Burr was “one of the hardest hitters on the team.” Some Senate aides, perhaps due to Burr’s easygoing persona, whisper that he is lazy.

“There’s not a separation between me and Donald Trump,” he declared at a rally.

Burr faced an unexpectedly tight race in 2016 against a low-profile opponent, former Democratic state Rep. Deborah Ross. Late in the contest, Burr signed on as a national security adviser to Donald Trump’s campaign. The affiliation helped both of them politically. It bolstered Burr’s support among the GOP base, and he brought establishment credentials and national security gravitas to a campaign lacking both. As a member of the Gang of Eight (the eight lawmakers informed of the nation’s most sensitive intelligence matters), Burr was briefed by the CIA on its judgment that Russia was working to aid Trump. You wouldn’t have known it from Burr’s public statements before the election. “I have yet to see anything that would lead me to believe that’s the case,” Burr told Foreign Policy in October 2016.

After the Washington Post broke the news of Trump’s Access Hollywood comments, many Republicans distanced themselves from Trump, but Burr stood by him. “There’s not a separation between me and Donald Trump,” he declared at a rally two weeks after the story came out. Buoyed by Trump, Burr won reelection by six points.

As Burr entered his third—and what he said would be his last—term in January 2017, Senate Majority Leader Mitch McConnell had a problem on his hands. The Russia scandal was snowballing. Members of both parties were calling for a probe into election interference. McConnell, in an apparent attempt to head off an independent investigation, insisted that Burr’s committee could handle the job.

Burr nearly derailed McConnell’s efforts, telling reporters that his panel would not investigate contacts between Trump’s campaign and Russia as part of its investigation into election interference. “That’s not our role. We don’t have any authority to go to any campaign and request information,” Burr said. But when Democrats on the panel privately threatened to boycott the investigation, he relented. This marked the first in a series of reversals by Burr, whose leadership of the probe appears to have been marked by conflicting impulses to project bipartisanship and protect the president.

One of Burr’s first steps in early 2017 was securing access to raw information underlying the intelligence community’s assessment that Russian President Vladimir Putin had approved the operation to meddle in the 2016 election. A Senate aide says Burr impressed Democrats by “playing hardball” to overcome opposition by then–CIA chief Mike Pompeo. But Burr also seemed determined to limit the probe. He refused to sign off on the subpoenas of key witnesses, and he largely resisted calls to increase the committee’s staff. With only nine staffers, the panel was “never really able to pursue the Trump finances angle,” the aide says.

While the president personally lobbied him to “conclude this thing as quickly as possible,” as Burr later put it to the New York Times, the senator became a target of one of Trump’s biggest cable news defenders, Fox Business Network’s Lou Dobbs. “My God, the head of Senate Intelligence Committee, he has absolutely abandoned his responsibility,” Dobbs told his viewers in late 2017.

Dobbs and other Republican critics have accused Burr of being manipulated by his top Democratic colleague. The Wall Street Journal’s Kimberley Strassel editorialized this year that “[Burr] ought to step up and offer some supervision of Mr. Warner.” Two weeks later, Burr gave an interview to CBS News in which he risked blowing up the committee’s delicate comity. Burr claimed the panel had not found “anything that would suggest there was collusion by the Trump campaign and Russia.” Warner fired back, claiming Burr had violated an agreement not to issue unilateral statements about the committee’s investigation and disputing Burr’s characterization of the findings.

The April release of the Mueller report, which stated the special counsel’s investigation “did not establish that members of the Trump Campaign conspired or coordinated with the Russian government,” provided Burr some political cover. But a less-talked-about part of the report revealed that Burr, shortly after receiving an FBI briefing on March 9, 2017, appeared to have tipped off then–White House counsel Don McGahn about a handful of Trump aides the bureau was investigating.

Caitlin Carroll, Burr’s spokesperson, said the senator does not fully recall “this specific conversation” with McGahn. “However, any conversations between the two would have been in reference to the need for White House personnel to voluntarily comply with the Senate Intelligence Committee’s Russia investigation.” She added, “The Chairman’s stewardship over the Committee’s bipartisan and fact-based investigation over the last two years speaks for itself.”

Burr has said he hopes his committee will wrap up the investigation this year, and he’s suggested “it will probably be pretty consistent with” Mueller’s findings. Still, Burr, whose political legacy will be defined by the role on the Senate intel panel he said he never wanted, is also worried about history’s judgment. “At some point somebody’s going to go back and do a review,” Burr told the Associated Press last year. “And I’d love not to be the one that chaired the committee when somebody says, ‘Well, boy, you missed this.’”