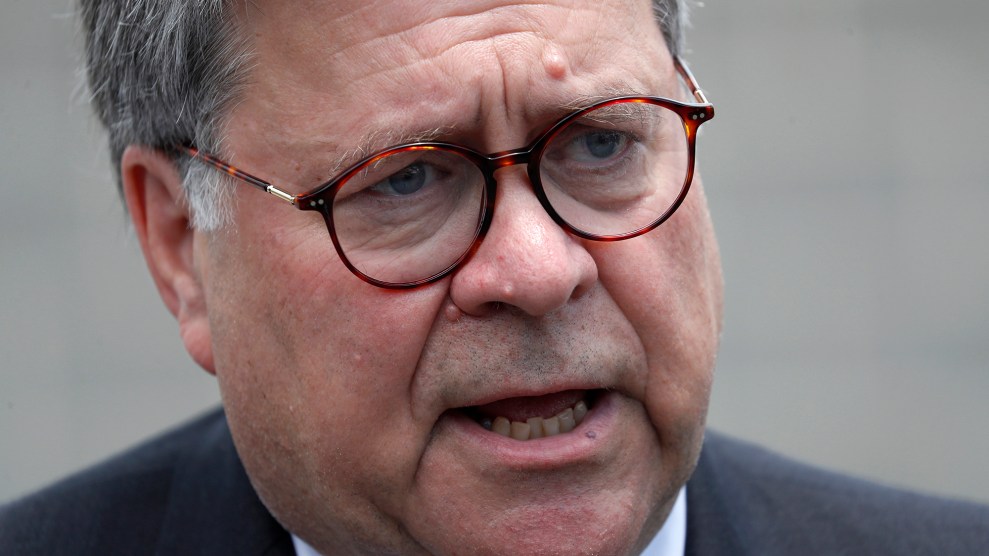 Attorney General William Barr speaks during a tour of a federal prison on July 8 in Edgefield, South Carolina.John Bazemore/AP

In a speech to law enforcement officers on Monday, Attorney General William Barr condemned a wave of progressive-minded district attorneys who have been elected in cities like Philadelphia, Boston, and Chicago on pledges to reduce the prison population, describing them as “demoralizing to us in law enforcement and dangerous to public safety.”

Barr, who built a tough-on-crime reputation as attorney general in the 1990s, said these “district attorneys that style themselves as ‘social justice reformers'” are “anti-law-enforcement DAs” who “spend their time undercutting the police, letting criminals off the hook, and refusing to enforce the laws.”

Speaking at the Fraternal Order of Police conference in New Orleans, the attorney general did not call out any district attorneys by name, but he decried the decision by some to stop prosecuting certain low-level offenses and to recommend shorter sentences, which he described as “pathetically lenient.” Cities that have elected these district attorneys, he said, “are heading back to the days of revolving door justice, and the results are going to be predictable: more crime and more victims.”

District attorney offices have not traditionally been hotbeds of progressive reform. But in recent years, DA races have started to garner more attention nationally amid a growing conversation about the immense power that prosecutors hold in the criminal justice system: They decide which charges to pursue and drop, whether to request bail, and how to shape plea bargain agreements that determine the outcome of roughly 95 percent of all cases. DAs like Larry Krasner in Philadelphia and Rachael Rollins in Boston successfully campaigned in 2017 and 2018 on promises to reduce mass incarceration and tackle racial disparities in the system. Reformists have also been elected in Cook County, Illinois, and St. Louis County, Missouri, among other places. In Queens, New York, one of the biggest jurisdictions in the country, public defender Tiffany Cabán amassed a huge following this year when she ran for district attorney by pledging to decriminalize sex work and divert as many offenders as possible from prisons, though she narrowly lost her race against a more moderate candidate.

Barr’s accusation that district attorneys endanger public safety by attempting to reduce the prison population is not borne out by studies, which suggest that crime has fallen in some of their jurisdictions. In Chicago, where reformist Kim Foxx was elected in 2016, violent crime dropped 8 percent last year, even as the number of people sentenced to prison or jail declined by about 20 percent, according to a new report by Reclaim Chicago, The People’s Lobby, and Chicago Appleseed Fund for Justice, three groups that supported her bid for office.

In Philadelphia, where Larry Krasner works, the jail population decreased 33 percent from 2016 to 2018, and there was no corresponding uptick in crime during that time. Gun violence has spiked in the city since he took office, but overall violent crime has dropped, and he argues his policies had nothing to do with the increase in shootings: He points out that his reforms have focused on giving more leniency to nonviolent offenders, and that his office has actually prosecuted a slightly higher percentage of gun offenses than his predecessor’s office did. In February, researchers at the University of Pennsylvania and George Mason University also released a study finding that his office’s decision to request bail in fewer cases did not increase the number of people who failed to appear in court or who were later charged with another offense.

Barr has suggested that locking up more people during the 1990s and early 2000s reduced crime. To the contrary, a 10-year study by the Brennan Center for Justice in 2016 found that 27 of 28 states that decreased their prison populations over the previous decade, often by reforming sentencing practices, saw crime drop.

Even President Donald Trump has supported efforts to lower the federal prison population. Last year, he signed a bipartisan bill that curbed some mandatory minimum sentences and gave judges more discretion when handing out punishments. He has continued to celebrate this law in recent months, inviting hundreds of guests to a party at the White House to tout its impact. “Americans have always believed in the power of redemption—that those who have fallen can work toward brighter days ahead,” Trump proclaimed ahead of the event in April. “My Administration is committed to helping former prisoners reenter society as productive, law-abiding citizens.”

But the president has also been a strong supporter of police officers and law enforcement. In his speech Monday, Barr criticized what he described as a backlash against the police after high-profile cases in which they have killed unarmed men of color. “The anti-police narrative is fanning disrespect for the law,” he said. “In recent years we have witnessed increasing toleration of the notion that it is somehow okay to resist the police. This is completely unacceptable.” He promised to push for new legislation to quickly carry out the death penalty against people who commit mass shootings or kill police officers.

“Punishment must be swift,” he said, later adding: “This administration has your back.”