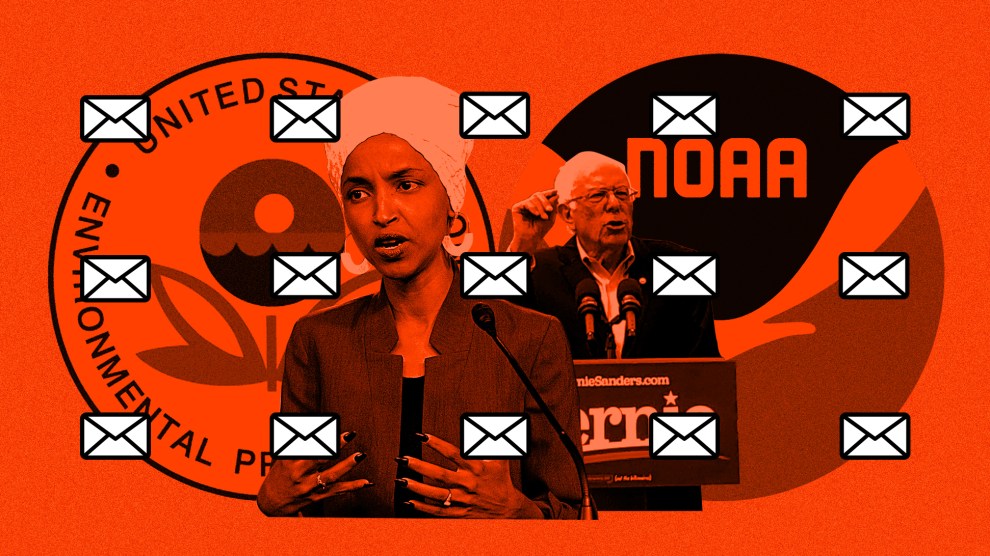 On July 10, Loreen Targos disrupted an Environmental Protection Agency awards ceremony where Administrator Andrew Wheeler recognized her team’s “exemplary problem-solving and project management” in a Great Lakes remediation project. After shaking Wheeler’s hand, Targos, an EPA project officer based in Chicago, unfurled a banner that called for a “fair contract to address public health & climate change,” a reference to the agency’s negotiations with the AFGE Council 238 union, which represents more than 8,000 EPA employees.

Two weeks after Targos’ protest made the news, the Republican opposition research outfit America Rising filed a Freedom of Information Act request seeking her correspondence. Specifically, the group was looking for “Emails sent by Loreen Targos, EPA scientist, that mention Congresswoman Ilhan Omar,” to whom the EPA staffer had donated $215 earlier this year. It was the first in a series of FOIA requests made by Allan Blutstein, an America Rising lawyer and senior vice president, seeking the records of EPA and National Oceanic and Atmospheric Administration employees who have contributed to Democrats. At least two of these requests have focused on supporters of Omar, a Minnesota lawmaker who has become a GOP bugaboo.

Blutstein appears to be searching for evidence that Targos and other EPA and NOAA employees violated the Hatch Act, which forbids government employees from performing any electioneering during work hours and from hosting political fundraisers. (Earlier this summer, the Office of Special Counsel recommended that presidential adviser Kellyanne Conway be fired for repeated Hatch Act violations.) Government employees, however, are free to donate to political candidates so long as the contribution is made on their personal time and does not involve the use of government resources or equipment.

It is unclear if Targos’ protest and the records request for her emails are related. But since July 24, Blutstein has submitted at least eight other requests concerning EPA and NOAA employees whose only common trait is that they have donated to Democrats. The requests have zeroed in on staffers who have donated to Omar and other Democratic members and candidates, as well as the presidential campaigns of Bernie Sanders, Kirsten Gillibrand, and Jay Inslee. Blutstein targets have included an EPA geologist, several EPA attorneys, and a National Weather Service staffer.

“Targeting federal employees based on their particular donations should raise everyone’s concern, because your personal political support for a candidate or party should not—if done consistent with the legal requirements—be something that’s held against you,” says Kevin Minoli, a partner at Alston & Bird and a former ethics and deputy general counsel at the EPA. “People on both sides of an election have the right to donate to candidates they support and they should do that without fear that someone is submitting information requests if they don’t like the candidate.”

Government employees are already briefed on the rules. “Between ethics officials, the Office of Special Counsel, and office of inspector general, there isn’t the need for an independent private force to implement or watch for federal violations here,” Minoli notes.

Until last year, Blutstein was a vice president at Definers Public Affairs, a Republican consulting and public affairs shop based in Virginia that was the recipient of a controversial $120,000 contract awarded by the office of then–EPA Administrator Scott Pruitt to provide “war room”–style media monitoring and shape press coverage of the agency. Meanwhile, the company, via Blutstein, was filing dozens of EPA records requests targeting staffers who had been publicly critical of the Trump administration.

“I wondered if they were emailing critical things about the agency on government time and how frequently they were corresponding about this,” Blutstein told the New York Times. “And did they do anything that would be useful for Republicans.”

The EPA canceled the Definers contract in late 2017, shortly after Mother Jones revealed its existence.

America Rising describes itself as “an opposition research and communications firm whose mission is to help its clients defeat Democrats,” while Definers also works with corporations and issue-based clients. The two entities have shared overlapping staff and have operated from the same office address. Other groups in this network include America Rising Squared, a nonprofit that doesn’t disclose its donors, which has sent staff in the past to ambush and film environmental activists such as Tom Steyer and Bill McKibben. Definers runs the conservative website the Need to Know Network, which posted flattering coverage of Pruitt that was publicized by the EPA.

Correction: Due to an editing error, the name of the National Oceanic and Atmospheric Administration was misstated in an earlier version of this story.