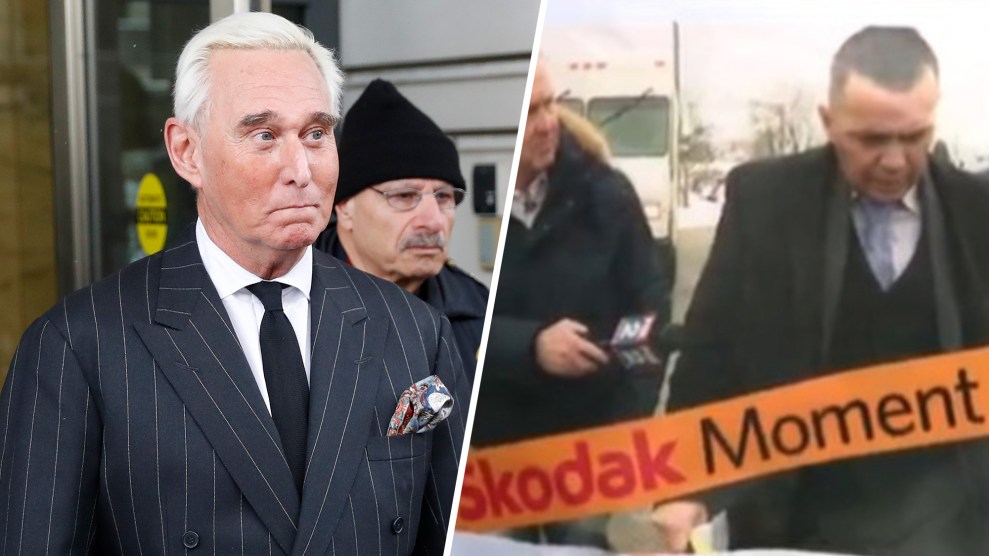 Roger Stone, the former adviser to Donald Trump, has appeared at strip clubs, sold signed rocks, developed a catch phrase, and publicly pleaded poverty to raise money to cover his mounting legal fees, as he awaits trial on obstruction of justice, witness tampering, and perjury charges tied to the Trump-Russia scandal. Stone’s all-out effort to drum up cash for his legal defense fund was scheduled to take him to Michigan later this month, where he planned to headline a fundraiser hosted by an unusual ally: a convicted fraudster who is currently under investigation by his local sheriff’s office for writing bad checks.

Stone is required to seek the court’s permission to travel and on Tuesday US District Court Judge Amy Berman Jackson granted his request to visit Washington, Michigan, for the July 27 event. An invitation to the fundraiser, slated to be held at the home of Jeff D’Angelo, the CEO of a company called Debt Bolt Inc., promised a speech and book-signing by the indicted Republican operative. But on Wednesday, D’Angelo said in a text message to Mother Jones that the fundraiser had been cancelled. “I will let you know about rescheduling,” he wrote. He did not respond to follow-up questions. As of Friday, the fundraiser’s Eventbrite page made no mention that the event had been cancelled, and it was still possible to buy tickets ($150, “no refunds”).

D’Angelo is currently under investigation in Macomb County, Michigan, where he lives, for “presenting himself as a multitude of legitimate businesses and issuing checks from accounts that do not have sufficient funds to cover the checks written.”

In an interview last week, D’Angelo said he knows Stone through a mutual acquaintance and planned the fundraiser because he is “a huge Trump fan” and believes Stone is being unfairly prosecuted. The proceeds would go to Stone, but, D’Angelo noted, “I’m promoting my company as well.”

That firm, which D’Angelo described as “the Uber of debt collection,” claims to allow people owed money to use an app to sell unpaid debts to collection agencies. Debt Bolt’s website is currently down while “undergoing maintenance,” the site says.

D’Angelo, whose given name is Jeffery Skodak, has considerable personal experience with debt. He has declared bankruptcy three times, most recently earlier this year. He also has a criminal record that includes convictions for credit card fraud and writing bad checks.

D’Angelo is currently under investigation in Macomb County, Michigan, where he lives, for “presenting himself as a multitude of legitimate businesses and issuing checks from accounts that do not have sufficient funds to cover the checks written,” Macomb County Sheriff Anthony Wickersham said in a statement. The investigation involves bounced checks to a local lumber company for around $8,000 from Debt Bolt and another D’Angelo company, according to police reports obtained by Mother Jones through a public records request.

The bounced checks are among several allegations of fraud by D’Angelo that have been reported to the sheriff’s office over the last 20 years, records show. In 2014, for instance, a man complained that he had been “defrauded” of $15,000 by D’Angelo and an associate. The man said D’Angelo and the colleague had promised but failed to deliver help modifying a mortgage. This accusation does not appear to have resulted in criminal charges.

D’Angelo has also been both a defendant and plaintiff in a multitude of civil lawsuits. In 2004, he sued Accor North American, the owner of a Motel 6 where he had worked, claiming two female colleagues had sexually harassed him. His ex-girlfriend later said in a sworn statement that he had confided to her that he fabricated some of the accusations he made in the lawsuit. (Her allegations came after the defendants had agreed to a $30,000 settlement and a judge ruled the settlement should stand.) D’Angelo denied concocting his allegations, but he did admit under questioning by Accor’s lawyers that he had falsely claimed to hold a college degree.

“I know this all may not look good for me, but I think telling the truth is the way to go,” D’Angelo said. “I have nothing to hide.”

In February, Detroit’s Fox 2 ran an investigative segment on D’Angelo, complete with a camera crew chasing him through a parking lot. Under the headline “’Skodak Moment’—serial entrepreneur kills reputations,” the story quoted seven people who claimed D’Angelo had ripped them off through Debt Bolt and a series of other businesses he launched. He attempted to legally change his surname last year to D’Angelo, but Wickersham said the change was not completed because “he did not show up to court and he issued a 175 dollar check to court that couldn’t be cashed.”

“He’s a professional con artist is what he is,” a woman identified as Jenny told Fox 2. She alleged that D’Angelo, through Debt Bolt, promised she’d make $15,000 if she paid $750 for a list of names and personal information for debtors but offered no help with collections and refused to refund her money.

In an interview, D’Angelo broadly denied the allegations against him. He called the Fox 2 report “attempted character assassination.” He claimed that many of the allegations cited in the report were caused by former employees stealing $300,000 from him, a matter he said his lawyers are pursuing. He also blamed his recent bankruptcy filing on this conflict. D’Angelo attributed earlier criminal convictions to a conflict with his former girlfriend, the same one who accused him of making false allegations, and his inability to afford effective lawyers at the time.

“I know this all may not look good for me, but I think telling the truth is the way to go,” he said. “I have nothing to hide.”

D’Angelo noted that he hoped that 150 people would attend his fundraiser for Stone. Perhaps an optimistic estimate, a crowd that size would net Stone up to $22,500. In previous efforts raise money, Stone judged an exotic dancing contest in Memphis and  spoke at an adult club in Richmond. He has also held more traditional fundraisers.

Stone has publicly and consistently complained about his escalating legal expenses and his loss of income due to his prosecution. In April, he said that he and his wife were forced to move out of their Fort Lauderdale home and into a one-room apartment to cut costs. He has set up a family defense fund, separate from his legal defense fund, to seek donations to cover living expenses for him and his wife. He has also benefited from outside fundraising efforts. Michael Caputo, a former Trump campaign adviser who is friendly with Stone, said in a text message that he raised $120,000 for Stone’s defense through a GoFundMe campaign earlier this year and plans to resume fundraising for Stone after Labor Day. Caputo said Stone needs to raise more than $2 million to cover his legal bills. It’s not clear how far Stone has gotten toward that goal. He and his attorneys did not respond to questions about how much he has raised overall or the fundraiser that was organized by a convicted felon with a history of fraud.