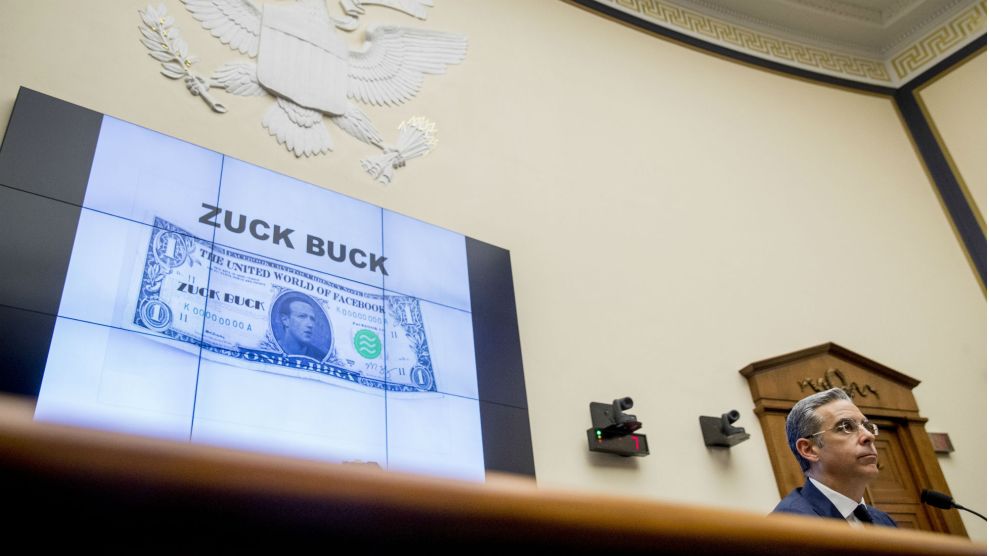 On Wednesday, representatives on the House Financial Services Committee peppered a Facebook executive with questions about Libra, the social media giant’s proposed cryptocurrency.

Democrats and several Republicans raised repeated concerns about whether Facebook’s plans mark a dangerous corporate overreach that would impede government’s ability to oversee monetary policy. They asked David Marcus, the CEO of Calibra, the Facebook subsidiary slated to launch the currency and service users digital wallets, to commit to a moratorium until congressional and regulatory concerns about the currency are resolved. Marcus repeatedly refused to make this promise, instead offering a commitment not to launch Libra until “we have addressed all concerns fully.”

Facebook announced plans for Libra in June, explaining that it would be available to purchase and use through Facebook Messenger, WhatsApp, and in a standalone app. The currency is set to be governed by a nonprofit Libra Association, based in Switzerland, consisting of 28 member companies across the tech and finance sectors including Calibra, along with Uber, Lyft, Paypal, Visa, and Mastercard. The association hopes to expand to 100 member companies before the currency’s slated 2020 launch.

This month, five leading Democrats on the House Financial Services Committee sent a letter to Facebook expressing grave concerns over how the currency could hurt the financial system and American consumers. The letter raises questions about the broader impact of replacing or augmenting a public function—government-run monetary systems—with a new order overseen by private corporations. They asked Facebook and Calibra to stop until further government oversight could be completed.

“It appears that these products may lend themselves to an entirely new global financial system that is based out of Switzerland and intended to rival U.S. monetary policy and the dollar,” they wrote. “This raises serious privacy, trading, national security, and monetary policy concerns for not only Facebook’s over 2 billion users, but also for investors, consumers, and the broader global economy.”

At the hearing, several lawmakers reiterated questions about Libra’s potential to interfere with US monetary policy. Rep. Carolyn Maloney (D-N.Y.) told Marcus point blank that Facebook should not launch Libra. “The creation of a new currency is a core government function and should be left to democratically accountable institutions,” she said.

Rep. Alexandria Ocasio-Cortez asked Marcus several times if he thought currency should be a public good. She also compared Libra to company scrip, private currencies historically used to pay workers, often lumber workers or coal miners, that allowed companies to take control of pricing in towns where many shops were company run.

Rep. Katie Porter (D-CA) compared Libra to so-called wildcat banks—poorly regulated rural banks that in the 1800s issued their own currencies that often became worthless, and that were later outlawed. “Aren’t you creating yesterday’s problem tomorrow?” Porter asked. Marcus responded that Libra will adhere to the proper regulators. But when asked by Porter, Marcus was unable to clarify which regulator he foresaw overseeing the currency.

“Tell me how Libra will not undermine sovereign currencies and the power of central banks? Or is…the very point to undermine central bakers and to provide greater freedom away from central banking?” asked Rep. Andy Barr (R-Ky.) Marcus responded to this question and others like it by assuring the representatives that Facebook’s goal is not to compete with the dollar or other global currencies, but stopped short of agreeing that currency should remain a public function.

“Currency is a core government function and should be left to democratically accountable institutions.”

In their letter to Facebook ahead of Wednesday’s hearings, House Democrats wrote that the company had provided insufficient information on how, absent the regulatory and security frameworks applied to regular banks and financial actors, the tech company will protect Libra users’ assets. “Those using Facebook’s digital wallet—storing potentially trillions of dollars without depository insurance—also may become unique targets for hackers,” they noted, adding that hackers have stolen billions from other cryptocurrency exchanges. “If products and services like these are left improperly regulated and without sufficient oversight, they could pose systemic risks that endanger U.S. and global financial stability.”

In Wednesday’s hearing, a number of representatives echoed concerns about Facebook’s ability to safely develop and secure a digital currency, especially as the tech giant remains under federal scrutiny for mishandling user data during the 2016 presidential election.

Rep. Brad Sherman (D-Calif.) claimed that Libra could do more damage to the country’s security than the attacks of September 11, 2001, citing research that’s shown digital currency to be popular with “nefarious operations.” By allowing for accounts to be created with a unique online key, instead of being linked to a clear personal identity, Libra, Sherman said, “will provide privacy to drug dealers, human traffickers, terrorists, tax evaders, and sanctions evaders.” He warned of future terrorist attacks on the US being financed through the currency.

Rep. Lance Gooden (R-Texas) told Marcus that while he is not opposed to innovation, “there is a level of distrust with Facebook” among consumers “because of some of the things that have taken place over the last year.” He asked Marcus whether Mark Zuckerberg, Facebook’s CEO, would publicly testify in Congress about this currency. Marcus would not commit to any testimony by Zuckerberg on Libra.

While the hearing’s strongest criticism came from House Democrats, they are far from alone in their concern that Libra needs more investigation and oversight before it can launch. Federal Reserve Chair Jerome Powell, nominated by Trump in November 2017, told the House Financial Services Committee earlier this month that while the Fed supports “responsible innovation” in the financial services industry, Libra “raises many serious concerns regarding privacy, money-laundering, consumer protection, and financial stability.” He said plans to launch the currency should be put on hold until these concerns could “be thoroughly and publicly addressed.”

Democrats on the House Financial Services Committee this week also unveiled a draft of the “Keep Big Tech Out Of Finance Act,” a bill that would ban tech companies with at least $25 billion in revenue from operating as financial institutions or issuing digital currencies. The proposed fine for violating these rules would be $1 million per day.

Facebook and its partners have pitched Libra as being a boon for financial inclusion and equity, highlighting its intention to create a “global currency” that “empowers billions of people.” The Facebook press release announcing Libra pointed out limits to financial access in developing countries, including citizens and small businesses lacking banking accounts and lines of credit. “This is the challenge we’re hoping to address with Calibra,” the release noted.

During Wednesday’s hearing, Reps. Rashida Tlaid and Ayanna Pressley both raised concerns about how the Libra Association’s member companies—which each pay at least $10 million to join—would represent the unbanked populations that Facebook is purporting to help with Libra.

Pressley cited reports that half of all adults who lack bank accounts live in seven countries: Bangladesh, China, India, Indonesia, Mexico, Nigeria, and Pakistan. She asked Marcus if any of the Libra Association’s partner organizations are based in these countries. Marcus said they were not, but that it would seek more representation in its membership as the association works up to 100 member companies.

For all of Libra’s claims to be empowering those who lack banking access, some experts see Libra as, instead, a Facebook effort to reestablish the company’s trusted role in users lives after a year marked by revelations about failing to keep information safe. Some 15 million users have ditched Facebook over the last two years. Last week, the Federal Trade Commission levied a $5 billion fine on Facebook for its mishandling of user data after an investigation into how political strategy firm Cambridge Analytica was able to harvest the private information of more than 50 million Facebook users for political purposes. Wharton professor Kevin Werbach argued in a New York Times op-ed last month that a successful digital currency might transform perceptions of the company.

“Privacy, civic discourse and even democracy were crushed beneath the wheels as Facebook rolled toward global domination. Now it faces angry legislators around the world, huge fines, hostile investigations and punitive regulations aiming to rein it in,” he wrote. “Libra is the last, best hope to re-establish trust between Facebook and the world.”