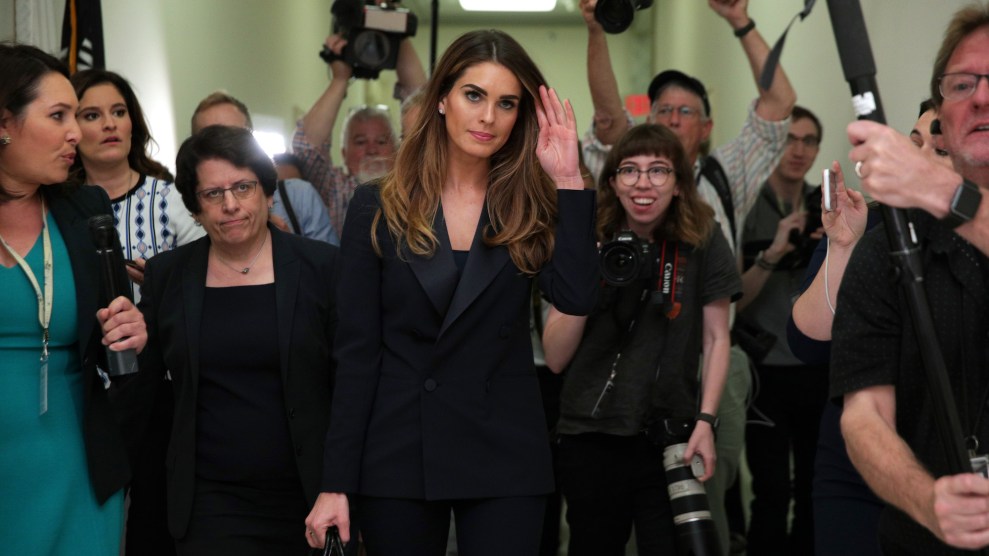 Hicks took part in an October 8, 2016, phone call with Trump and his former personal lawyer, Michael Cohen. The call, which occurred the day after the release of the infamous “Access Hollywood tape,” came amid a flurry of communications by Cohen that led to his $130,000 payment to pornographic actress Stephanie Clifford, known as Stormy Daniels. As part of a recently unsealed 2018 application for a warrant to search Cohen’s apartment, hotel room, office, and cell phones, an FBI agent implied that the call may have been among the communications by Cohen that “concerned the need to prevent Clifford from going public” before election day with her claim that she’d had sex with Trump in 2006.

That is a problem for Hicks, who testified before the committee on June 19 that she “wasn’t aware of a hush money payment agreement” with Daniels. Hicks also testified that she lacked “any direct knowledge” of whether Trump knew that Cohen paid off the “Camp Cuddly Pines Powertool Massacre” star. In addition, Hicks said that she was “never present” for any conversation between Trump and Cohen about Daniels.

The unsealed affidavit does not flatly assert that the Hicks was part of a discussion about paying off Daniels. But it supported that possibility. On Thursday night, Judiciary Committee Chairman Jerrold Nadler (D-NY) wrote to Hicks and her attorney, Robert Trout, asking her to clarify apparent inconsistencies in her testimony “in very short order—but not later than August 15, 2019.” Nadler said that unsealed material “raises substantial questions about the accuracy” of several of Hicks’ claims.

In a statement Friday, Trout said that Hicks’ testimony was accurate. “Reports claiming that Ms. Hicks was involved in conversations about ‘hush money’ payments on October 8, 2016, or knew that payments were being discussed, are simply wrong,” Trout said. “Ms. Hicks stands by her truthful testimony that she first became aware of this issue in early November 2016, as the result of press inquiries, and she will be responding formally to Chairman Nadler’s letter as requested.”

Hicks previously offered more detail on the October 8 call with Trump and Cohen. During her June testimony, she said the call was about rumors she’d heard about “a tape involving Mr. Trump in Moscow with, you know—can I say this?…with Russian hookers, participating in some lewd activities.” Hicks explained that she “wanted to make sure that I stayed on top of it before it developed any further, to try to contain it from spiraling out of control.” She said she had heard that the gossip site TMZ might have “access to this tape,” and she knew Cohen was friendly with TMZ founder Harvey Levin.

Cohen, in February testimony before the House Oversight Committee, also referenced a call with Hicks that he said took place shortly after the Access Hollywood tape was revealed. He said that the conversation related to how to respond to press inquiries about the Access Hollywood audio. (That’s not wholly consistent with either the suggestion in FBI affidavit or Hicks’ description.) Cohen also said the call occurred on October 7, not the following day. But the FBI affidavit says phone records show the October 8 call was the first that “Cohen had received or made to Hicks in at least multiple weeks.” This suggests Cohen may have been referring to the same call with Trump and Hicks that is at issue, but that he got the date wrong.

Asked if Cohen’s call with Trump and Hicks related to paying off Daniels or, as Hicks claims, to a rumored tape supposedly showing Trump with Russian prostitutes, Cohen’s lawyer, Lanny Davis, responded unequivocally: “It was about hush money payments. She is lying.”

Davis indicated he based this statement on the warrant application unsealed Thursday. He did not say if he had checked with Cohen, who is serving a three-year prison sentence after pleading guilty to bank fraud, perjury, and campaign finance violations related to the Daniels’ payment.