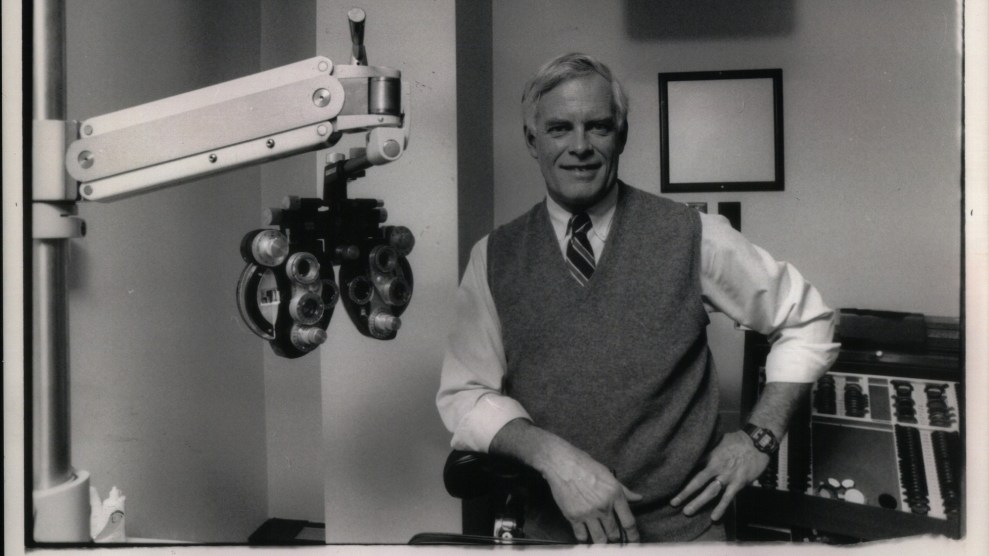 When John Tanton, a Michigan ophthalmologist and environmentalist, launched the modern anti-immigration movement in 1979, he had a simple but radical goal: eliminate nearly all immigration to the United States. To do that, Tanton hoped to turn opposition to immigration into a high-minded cause embraced by people of all political persuasions. Charges of nativism, Tanton assumed, would sink his new endeavor.

On Tuesday, Tanton died at the age of 85. Despite his initial warnings about nativism, Tanton spent the last decades of his life issuing increasingly extreme warnings about immigrants of color and became a hero to white nationalists. It was fitting, then, that news of his death didn’t spread until Wednesday evening, just as President Donald Trump was leading a reelection campaign rally on a platform of unabashed racism.

Under Trump, Tanton’s once-fringe ideas have become the guiding philosophy of a White House obsessed with immigration. The Federation for American Immigration Reform, the group Tanton founded four decades ago, now has alumni in key posts across the federal immigration bureaucracy. And for the first time ever, all three immigration agencies are led by people who follow FAIR’s playbook. Stephen Miller, the president’s immigration guru, is a savvier and far more influential Tanton.

In a 1989 oral history, Tanton recalled that the two defining events of his childhood in Detroit were Pearl Harbor and the city’s 1943 race riot. After leaving the city for a farm in the wake of the riot, Tanton grew up to be a conservationist. He took to population control activism with a convert’s fervor after reading the Stanford biologist Paul Ehrlich’s warnings about overpopulation.

Inspired by the ideas of the ecologist Garrett Hardin, Tanton came to see immigration as a neglected piece of the population puzzle. In his 1974 essay “Lifeboat Ethics: the Case Against Helping the Poor,” Hardin proposed allowing people in the developing world to starve to death in the name of tough-love population control and criticized immigration because it “moves people to the food.”

In 1979, Tanton founded the Federation for American Immigration Reform. (Hardin later joined FAIR’s board.) The initial goal was to limit immigration in the name of population control, but Tanton’s co-founder, a liberal Michigan lawyer named Roger Conner, later said that the pair quickly realized that people weren’t going to go around with signs reading, “We need zero population growth to protect the environment.” So FAIR, encouraged by the furious reaction to the 1980 Mariel boat lift that brought 125,000 Cubans to the United States, pivoted toward nativism. The aim, as one board member put it, was to figure out how to “blow a little heat on the coals” without “having them burst into flames.”

It was fitting that news of his death spread just as Trump was leading a reelection campaign rally on a platform of unabashed racism.

It was Tanton who proved to be the biggest liability. In 1986, he wrote a memo in which he speculated about Latinos replacing native-born Americans through high fertility rates, and it leaked to the press. “[P]erhaps this is the first instance in which those with their pants up are going to get caught by those with their pants down!” Tanton wrote. The blowback forced him to resign from a pro-English-language group, but he remained on FAIR’s board.

Tanton then moved further to the fringes, embracing eugenics and launching a white nationalist journal. He founded a publishing house that reprinted a vilely racist novel envisioning a horde of 800,000 Indians immigrants led by a man called the Turd-eater. The book implies that the best solution would be to massacre the Indians upon arrival, but because empathy gets in the way, the Indians conquer France. “I’ve come to the point of view that for European-American society and culture to persist requires a European-American majority, and a clear one at that,” Tanton wrote in 1993.

FAIR was more careful about avoiding obvious bigotry. So was the Center for Immigration Studies, which Tanton helped create as a partner organization to FAIR that would appear more neutral and academic. The two groups’ staffers were asked to testify before Congress, and journalists turned to them when they needed anti-immigration quotes. They were able to bring into the mainstream a form of xenophobia that had not had a place in public discourse.

As the Democratic Party grew friendlier to immigrants, FAIR and NumbersUSA, a third group Tanton helped launch to serve as the grassroots arm of the network, cultivated a right-wing base that pressured Republican legislators to kill immigration reform bills under George W. Bush and Barack Obama that would have given millions of undocumented immigrants a path to citizenship. Tanton’s organizations had gained the power to thwart legislation, but it never had a president on its side until Trump.

On Wednesday evening, as Trump was slandering Rep. Ilhan Omar (D-Minn.), a Somali immigrant, and the crowd chanted “send her back,” word of Tanton’s death spread online via Jared Taylor, a self-described “white advocate” who greatly admired Tanton and is known for running a white supremacist publication. It was a poignant reminder of how far both Tanton and the president have strayed from Tanton’s initial aim of reducing immigration by studiously avoiding overt nativism.

FAIR’s influence has reached its zenith, but Tanton’s goals are further from reach than ever. He wanted to end the era of “mass migration.” Today, legal immigration remains near record highs and, thanks to the backlash against Trump, so does public support for immigrants. The odds of passing legislation to cut legal immigration appear lower than at any point in decades. Now, even Trump is saying he doesn’t want to cut immigration. Measured on his own terms, Tanton was a failure.

In a 1975 essay, Tanton concluded on what is now a jarringly hopeful note. If there were equality between nations, he argued, there could be open borders. “Happily,” Tanton wrote, “it is possible to envision a world in which international migration could become free and unfettered.” On Wednesday, as Tanton was mourned by white nationalists and the president continued his assault on immigrants and congresswomen of color, it was hard not to think that the man who wrote those lines died decades ago.