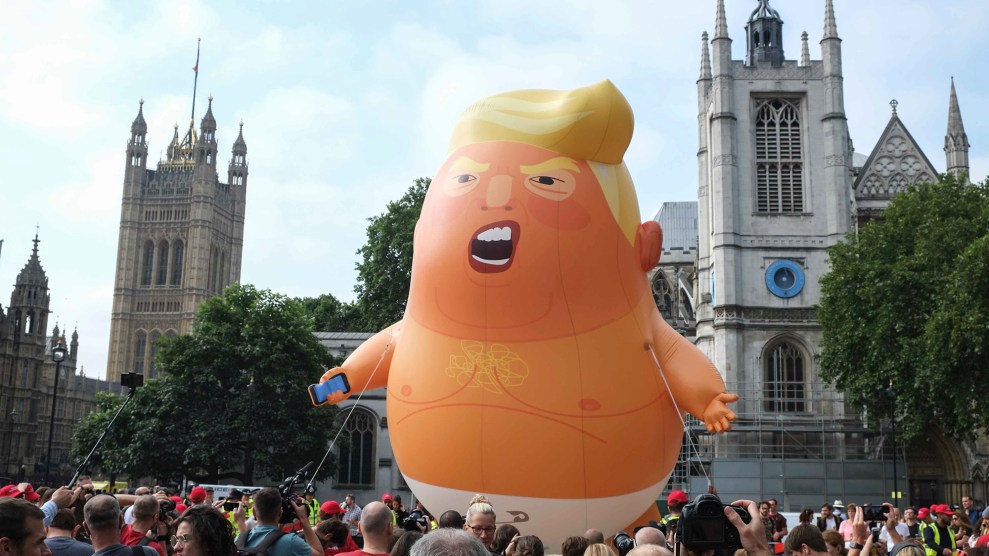 A blimp depicting President Trump as a giant angry orange baby wearing a diaper is raised over Parliament Square in London in July 2018.Claire Doherty/Sipa USA via AP Images

Ahead of Donald Trump’s three-day trip to the United Kingdom this week, London Mayor Sadiq Khan is criticizing his government’s decision to “roll out the red carpet” for the US president’s formal state visit, calling Trump a leader of the global far-right movement and comparing his rhetoric to that of 20th-century European fascists.

In a harsh op-ed in the Observer on Saturday, Khan, who has long had a contentious relationship with Trump, blasted the president for “praising the ‘very fine people on both sides’ when torch-wielding white supremacists and antisemites marched through the streets,” for “setting an immigration policy that forcefully separates young children from their parents at the border,” for his Muslim travel ban, and for his “deliberate use of xenophobia, racism, and ‘otherness’ as an electoral tactic.”

He urged British Prime Minister Theresa May to make it clear during the visit that the United Kingdom rejects Trump’s divisive rhetoric, and that his “views are incompatible with British values.”

“That’s why,” he wrote, “it’s so un-British to be rolling out the red carpet this week for a formal state visit for a president whose divisive behaviour flies in the face of the ideals America was founded upon – equality, liberty and religious freedom.”

There are some who argue that we should hold our noses and stomach the spectacle of honouring Trump in this fashion – including many Conservative politicians. They say we need to be realists and stroke his ego to maintain our economic and military relationship with the US. But at what point should we stop appeasing – and implicitly condoning – his far-right policies and views? Where do we draw the line?

Rather than bestowing Trump with a grand platform of acceptability to the world, we should be speaking out and saying that this behaviour is unacceptable—and that it poses a grave threat to the values and principles we have fought hard to defend – often together—for decades.

I am proud of our historic special relationship, which I’m certain will survive long after President Trump leaves office. The US is a country I love and have visited on many occasions. I still greatly admire the culture, the people and the principles articulated by the founding fathers. But America is like a best friend, and with a best friend you have a responsibility to be direct and honest when you believe they are making a mistake.

In years to come, I suspect this state visit will be one we look back on with profound regret and acknowledge that we were on the wrong side of history.

In addition to meeting with May, Trump is scheduled to have lunch with the queen and travel to Portsmouth for the 75th anniversary of World War II’s D-Day landings in France.

Huge protests are expected in London—the city has spent $32 million on some 10,000 law enforcement officers, helicopters, and bomb-sniffing dogs to stand guard. Protesters are preparing to fly a massive blimp over the city that portrays Trump as baby having a temper tantrum in a diaper, as they did during his visit to the United Kingdom last summer. Khan has reportedly again given them permission to do so.

Trump, meanwhile, appears to be brewing another feud, this one with Meghan Markle. In a recent interview with the Sun, a British tabloid, he referred to her as “nasty” when asked about comments she reportedly made during his 2016 presidential campaign about him being “divisive” and “misogynistic.”

On Sunday, the president denied making the statement, despite an audio recording released by the Sun to show its reporting was accurate.

I never called Meghan Markle “nasty.” Made up by the Fake News Media, and they got caught cold! Will @CNN, @nytimes and others apologize? Doubt it!

Trump is also scheduled to have lunch with Markle’s husband, Prince Harry, during his visit this week.