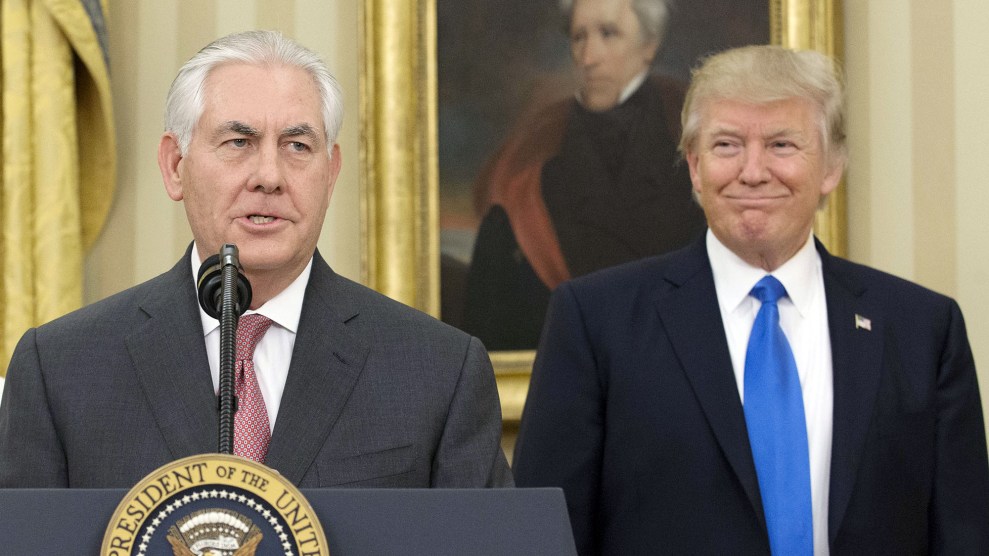 In 2016, Vladimir Putin mounted a sweeping attack on the US election in part to help elect Donald Trump president. Less than three months after Trump took office—after the US intelligence community had publicly confirmed that Russia had waged this covert information warfare—Trump sent his new secretary of state, Rex Tillerson, to Moscow to meet Putin. At that meeting, Tillerson did not challenge or press Putin when the Russian president falsely denied that Moscow had perpetrated this assault on American democracy. Who says so? Tillerson himself.

On May 21, the House Foreign Affairs Committee conducted a private interview with Tillerson, and on Thursday it released a partially redacted transcript of that session. The news stories prompted by this release focused on Tillerson’s accounts of instances when White House officials Steve Bannon and Jared Kushner blind-sided him on key foreign policy matters, often by holding meetings with top foreign officials without informing Tillerson. But the interview also revealed information about Trump’s reaction to the Russian attack that benefited him.

Tillerson was questioned about his initial meeting with Putin, which occurred in Moscow on April 12, 2017. He spoke to the Russian president for about two hours, and, as he told congressional investigators, this was “the first opportunity for a representative of the Trump administration at a high level to talk directly to President Putin and express our assessment of our current relationship.”

Putin, as Tillerson put it, “expressed his view of what had contributed to the deteriorating [US-Russia] relationship and a lot of this was really stuff that had happened a long time ago way back to the post-Soviet transition and, you know, promises he viewed that had been made by previous presidents and promises not kept…And that was when, though, we kind of said, well, you know, we could spend the rest of this administration’s time re-litigating the past or we can just say, look, we are where we are. What do you want to do now? That’s exactly how I said it to him…And I said I have some ideas on what we should do, and then we talked about that.”

In Tillerson’s description of the conversation, he did not confront Putin regarding Russia’s intervention in the US election. He noted he was focused on charting “a course forward.” A congressional staffer asked if there had been any discussion of the Kremlin’s attack, and Tillerson said that he raised it as one of several hurdles that needed to be overcome: “I brought it up as one of the obstacles. I said there’s a lot of obstacles to this relationship, and that was one of them.” Tillerson told the committee that he said to Putin “obviously that has to stop.” Yet Putin, as expected, repeated his previous public denials of having intervened in the 2016 race.

“Did you challenge him on it in the room?” a staffer inquired. Tillerson answered, “There wasn’t any point in that…I stated our view. He stated his…We could spend a lot of time re-litigating the past and we would never deal with this and it will just get worse.” So Tillerson did not press Putin on this and focused on other matters instead. He depicted the exchange as rather low-key.

Moreover, Tillerson had received no instructions from Trump on how to address the issue of Putin’s attack. And Trump showed no interest in any discussion of this important topic before or after the meeting. Asked if he had “received any direction from the White House prior to that meeting about whether or how to frame [Russia’s] election interference,” Tillerson responded, “No.” Asked if anyone from the White House talked to him about it following his session with Putin, Tillerson said, “No.”

So Trump, according to Tillerson, dispatched his secretary of state to huddle with Putin and gave him no instructions on what to say about Putin’s covert attack on the United States and didn’t bother to talk to Tillerson about this afterward. It was a subject Trump did not care about.

Committee staffers also asked Tillerson about Trump’s first meeting with Putin, which occurred in Hamburg three months later at a G-20 get-together. After that private conversation, which Tillerson attended, the secretary of state held a press conference and noted that Putin had again denied Russian intervention in the 2016 election. Tillerson declined to say whether Trump had pushed Putin on this point. The Washington Post subsequently reported that, according to the interpreter in the meeting, Trump had responded to Putin’s denial by saying, “I believe you.” Asked during the congressional interview if Trump had said anything like that, Tillerson answered, “I don’t recall.” He was not pressed further on this point.

At this interview, Tillerson was inevitably asked about a widely reported incident in which Tillerson supposedly referred to Trump as a “moron.” Before Tillerson could answer the question, his lawyer interrupted and said,  “We should probably then move on, I think, from that topic.” A Democratic staffer persisted: “Do you recall, whatever was said or was not said…” And the lawyer again interrupted: “We really should move on…We’re ready to move on.” And the staffer moved on.