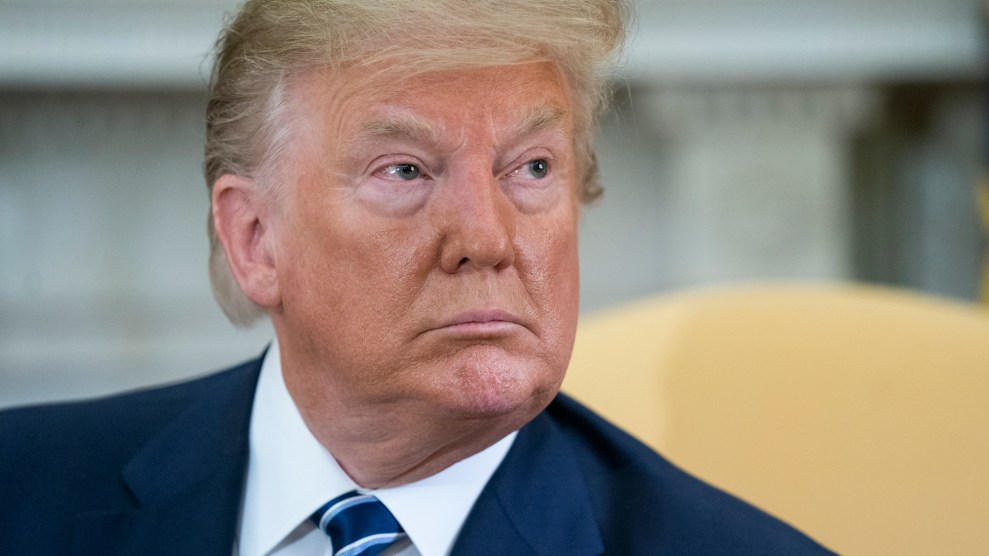 The White House denied the story in a statement, calling Carroll’s allegations “a completely false and unrealistic story surfacing 25 years after allegedly taking place,” adding that the story was “created simply to make the President look bad.”

Carroll’s account describes the alleged attack in graphic detail. “The moment the dressing-room door is closed, [Trump] lunges at me, pushes me against the wall, hitting my head quite badly, and puts his mouth against my lips,” she writes. “He seizes both my arms and pushes me up against the wall a second time, and, as I become aware of how large he is, he holds me against the wall with his shoulder and jams his hand under my coat dress and pulls down my tights.”

The alleged encounter then escalated even further: “The next moment, still wearing correct business attire, shirt, tie, suit jacket, overcoat, he opens the overcoat, unzips his pants, and, forcing his fingers around my private area, thrusts his penis halfway — or completely, I’m not certain — inside me.”

This is an unequivocal description of first-degree rape, according to Roger Canaff, a former sex crimes prosecutor in the Bronx who now trains law enforcement on how to handle sexual violence cases. But the statute of limitations for first-degree rape was just five years in New York in the mid-1990s, when the incident is alleged to have occurred. (Carroll claims the attack took place in either the fall of 1995 or the spring of 1996.) New York changed its statute in 2006 to give prosecutors unlimited time to bring first degree rape-charges, but the new law doesn’t apply to cases in which the statute of limitations has already expired.

I called up Canaff for more insight into how and whether the president might be prosecuted, and how New York’s statute of limitations comes into play.

Mother Jones: What are the potential charges a prosecutor could consider for an incident including the details Carroll describes?

Roger Canaff: Like pretty much all states, New York has always had various levels of criminal behavior. The basic, centuries-old statute against rape is “rape in the first degree.” It’s sexual intercourse—it has to be a penis in a vagina—against the person’s will, by physical compulsion.

[Carroll’s description] clears that [definition]. What she describes is a full-on physical attack. It couldn’t be construed any other way. There wasn’t any sort of a consensual behavior leading up to it, [no indication] that he might’ve been mistaken. It wasn’t a situation where she appears to have changed her mind and withdrawn consent.

MJ: Are there any other charges that might apply?

And there’s also a misdemeanor that covers basically the same type of behavior. You could charge that, except that’s a misdemeanor with a two-year window, so that’s long gone.

MJ: So if the allegations are true, the president gets away with it?

MJ: Let’s imagine there was no statute of limitations. Part of Carroll’s story is that she hasn’t washed the Donna Karan coat dress she was wearing at the time of the alleged attack. Could there still be usable DNA evidence on it?

RC: If she still has the dress, then there’s a possibility that it has biological material on it. It can be examined and tested for that. DNA does degrade, but, you know, is it under plastic? It just totally depends on how she’s kept this dress and where it’s been. But testing is a lot more sophisticated now than it was even 20 years ago.

MJ: We’ve all heard so much about the Department of Justice policy that says you can’t indict a sitting president. How does that affect this case?

RC: That’s federal law. This wouldn’t be a federal case, it’d be a state case. I don’t think that there would be a statutory bar to instituting a criminal investigation against the president from the state of New York.

MJ: What are the other possible barriers to bringing charges?

RC: The other barriers are obvious: the amount of time that’s passed, the fact that there don’t appear to be any witnesses to it. [Without DNA evidence], it’s very much her word against his word, and it’s such an old situation.

MJ: So the district attorney who would be looking at this case is Cyrus Vance Jr. And then there’s the New York Police Department. What are they thinking right now, seeing this article with these criminal allegations?

RC: I don’t think they are thinking anything just from the publication of this article. I don’t think they would say to themselves, “Okay, we have a report that’s public about a rape that was committed by the person who is now the president of the United States. Let’s go after him.” I don’t think they would take any action unless and until the woman in question—Ms. Carroll—came forward and said, “This happened to me, and I’m seeking a criminal justice response.”