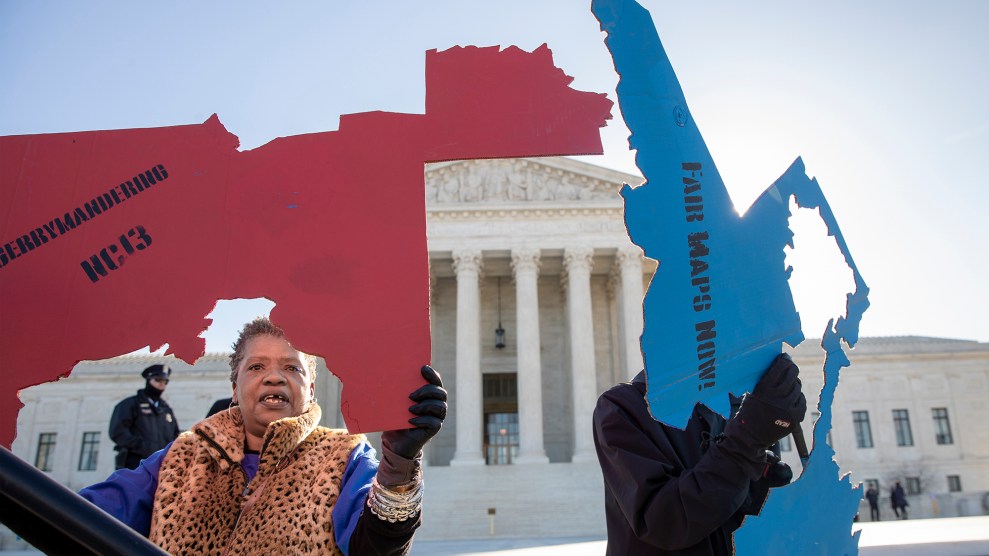 Activists opposed to partisan gerrymandering protest outside the US Supreme Court on March 26.Carolyn Kaster/AP

Writing for the conservative majority in a 5-4 decision, Roberts found that the federal courts cannot strike down extreme gerrymandering intended to benefit one political party over another. In doing so, the justices on Thursday declared open season for hyper-gerrymandering, giving the majority party license to rig state district lines in 2021, when the next round of nationwide redistricting will take place. The decision is a doomsday scenario for voting rights, permitting state lawmakers to choose their voters, rather than allowing voters to select their representatives.

The majority essentially abdicated its responsibility to rein in partisan gerrymandering by stating that it’s a political question too tricky for the legal minds on the nation’s highest court to tackle. The ruling leaves voters in many states without recourse when their participation in the democratic process is diluted through gerrymandering.

Kagan was having none of it. She wrote, “For the first time in this Nation’s history, the majority declares that it can do nothing about an acknowledged constitutional violation because it has searched high and low and cannot find a workable legal standard to apply.” Justices Ruth Bader Ginsburg, Stephen Breyer, and Sonia Sotomayor joined Kagan’s dissent.

Kagan wrote that the majority’s claim that it couldn’t solve this problem was dubious, given that lower-court judges in the same cases—in Maryland and North Carolina—had assessed the evidence and ruled accordingly. It’s hard work, but it’s doable. “By substantially diluting the votes of citizens favoring their rivals, the politicians of one party had succeeded in entrenching themselves in office,” Kagan wrote of the lawmakers in Maryland and North Carolina who orchestrated the gerrymanders. “They had beat democracy.” The conservative majority let them get away with it.

Roberts, in his ruling for the majority, wrote that state courts offered one venue for addressing partisan gerrymandering in the future. “But what do those courts know that this Court does not?” Kagan wrote. “If they can develop and apply neutral and manageable standards to identify unconstitutional gerrymanders, why couldn’t we?”

With the 2020 census and redistricting around the corner, state legislatures across the country will feel emboldened to draw districts that entrench one party’s power. Voters in have some recourse: In certain states, voters have the power to approve independent redistricting commissions, and in others, state constitutions and laws provide a path to challenge gerrymandering in state courts. But in many states, neither route is available. With improved data collection and powerful computer software, gerrymandering has evolved into nearly a science, and it may cause millions of voters across the country to lose the power to choose their representatives by being packed into uncompetitive districts where their votes could have little effect.

“The ‘core principle of republican government,’ this Court has recognized, is ‘that the voters should choose their representatives, not the other way around,'” Kagan wrote, adding, “The majority disputes none of this.” She concluded, “Of all times to abandon the Court’s duty to declare the law, this was not the one. The practices challenged in these cases imperil our system of government. Part of the Court’s role in that system is to defend its foundations. None is more important than free and fair elections.”