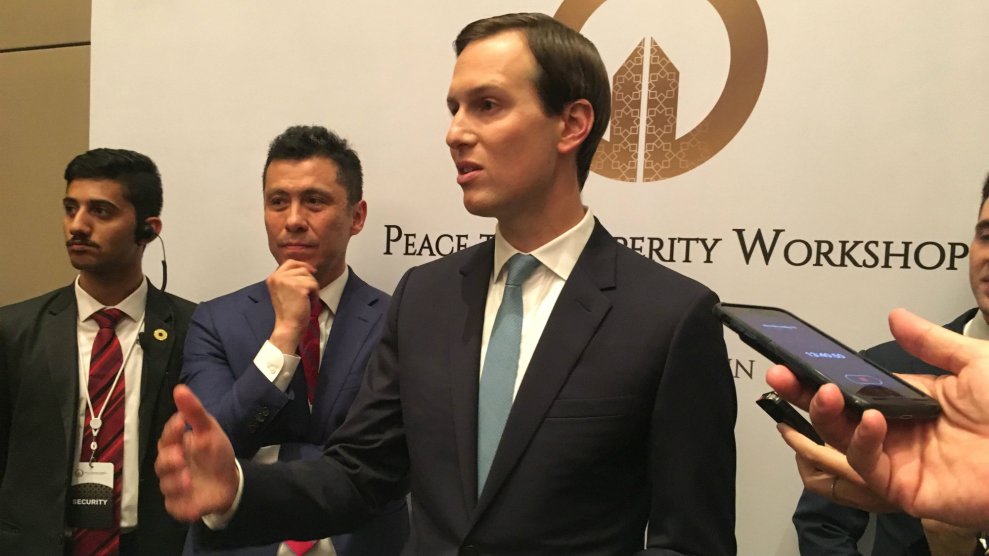 To solve what he called “the war that never ends” between Israel and the Palestinians, President Donald Trump promised to pursue an “ultimate deal” after securing the White House in 2016. No landmark agreement has materialized, but during a two-day summit this week in Bahrain, Trump’s son-in-law and senior adviser Jared Kushner presented a $50 billion “peace to prosperity” plan, promising 179 business and infrastructure projects.

Zero Israeli or Palestinian politicians attended the event, and among Palestinian leaders, the conference was derided as infeasible without a political solution to stabilize the region. Kushner assured attendees that a political solution would be coming with the second part of his plan, providing no specifics. “Today is not about the political issues,” he said in a speech opening the conference. “We’ll get to them at the right time.”

Since taking office, Trump has eliminated more than $200 million in aid to the West Bank and Gaza, removing “food aid or basic health services” from “tens and thousands of Palestinians,” the Israeli newspaper Haaretz reported. His administration has closely allied itself with Prime Minister Benjamin Netanyahu’s right-wing government and championed several controversial Israel initiatives like moving the American embassy to Jerusalem and endorsing Israeli control of the disputed Golan Heights. Even Kushner’s economic development plan hews closely to a proposal Netanyahu introduced more than a decade ago.

Gregg Carlstrom, Middle East correspondent for the Economist, offered some pointed commentary from the conference, which in his view appeared to range from laughably naive to bizarre.

Jared Kushner in Manama: "To be clear, economic growth and prosperity for the Palestinian people are not possible without an enduring and fair political resolution to the conflict." (So, um, about this workshop then…)

Kushner: “Some people have mockingly called this effort the deal of the century… better referred to as the opportunity of the century.” *drink*

Kushner, with a straight face: “Tomorrow we’ll be talking a little bit about property rights, which is a very essential component for people to get loans.”

Similar to how Trump pitched the beaches of North Korea as a future real estate bonanza for the Hermit Kingdom, Kushner and other top Trump officials followed suit, with Treasury Secretary Steven Mnuchin telling investors at the conference that soon the West Bank and Gaza are “going to be like a hot IPO.”

The moderator asked the two panelists (Steve Schwartzman and Mohamed Alabbar) what would need to happen for them to feel comfortable investing in Palestine. Neither of them mentioned the minor detail of a half-century occupation

Moderator: Hey, what about the fact that Gaza and the West Bank are separated? Is that a problem?
Schwartzman: I think, if I read the plan right, there’s a road that connects the two. (Glad that’s sorted!)

In a series of panels on the second day, officials from Saudi Arabia and the United Arab Emirates joined American executives like Randall Stephenson, chairman of AT&T, and Trump fundraiser Tom Barrack for some lofty discussions of technology for Palestine.

A Saudi government adviser on the first panel just said, “everything that we’re talking about today took place 25 years ago,” which should be the official motto of all Israeli-Palestinian peace efforts

Moderator: You’ve been to the Palestinian territories, tell us how the Palestinian people live
Panelist: Well, I went as a tourist, and I was only there for a day and a half. But people there seem to like sports and music

The head of the Cleveland Clinic in Abu Dhabi says he’s “very excited about the future of health care in the region.” In Gaza last week doctors said they’re currently unable to obtain everything from cancer meds to milk for infants

We kick off the afternoon’s fun with Kevin Hassett, the “Dow 36,000” guy, talking about property rights. In Palestine. “You can radically transform economies when you improve their ability to document property rights!”

The president of AT&T, asked to ballpark the cost of a 5G network in Palestine, compared it to Mexico, which he said was “five to ten times bigger.” (It’s 300 times bigger.) Genuinely unclear if some of today’s panelists could find Palestine on a map

I’m not making this up, Hassett just wondered aloud whether the blockchain could be a solution for property deeds in Palestine

Amazing moment just now as Mnuchin and three Gulf finance ministers agreed on the importance of prosperity. Think we’re close to a breakthrough that solves this whole thing

Not far but a world away from the wealthy setting of Bahrain, thousands of Palestinians protested in Ramallah during the summit. “The US administration is humiliating the Arab leaders,” one senior Palestinian official said. “The time has come for the Arabs to rise in order to restore their dignity.”