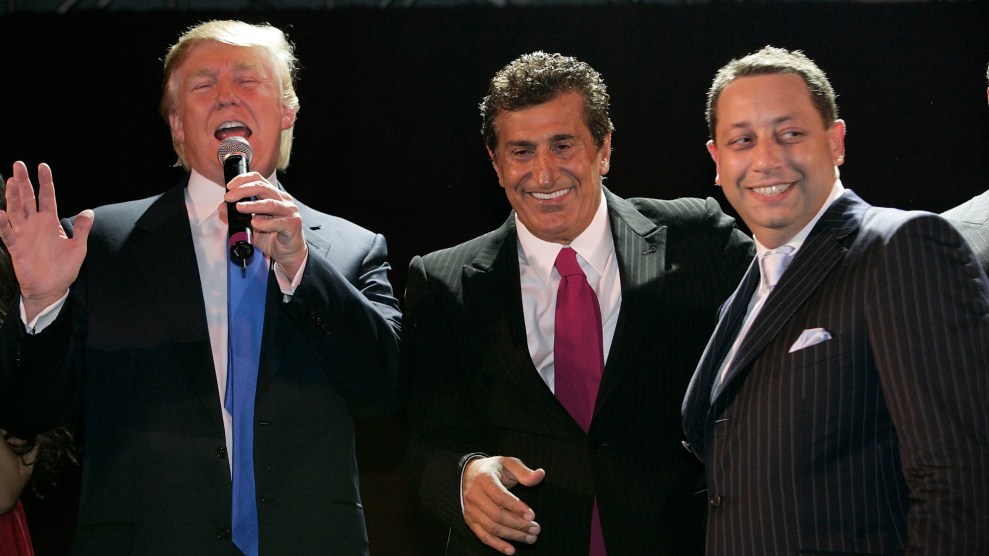 Update (6/21/2019): Felix Sater missed his scheduled interview with the House Intelligence Committee on Friday. “The Committee had scheduled a voluntary staff-level interview with Mr. Sater, but he did not show up this morning as agreed,” said Patrick Boland, a spokesman for the panel. “As a result, the Committee is issuing a subpoena to compel his testimony.” Sater’s lawyer, Robert Wolf, said his client did not appear due to unspecified “health reasons.”

Felix Sater, a real estate developer who helped Donald Trump secretly pursue a Trump-branded tower project in Moscow, will testify before the House Intelligence Committee on Friday after months of delay, but the session will be behind closed doors. Sater, though, tells Mother Jones he would have happily appeared in open session—begging the question of why the committee would not question him publicly.

“I was always willing to testify publicly,” Sater said on Thursday.

Sater’s private appearance may help congressional Democrats’ effort to investigate the potentially lucrative Moscow Trump tower deal that Trump chased while running for president—when he was insisting he had nothing to do with Russia (or with Sater, who had previously worked with Trump). Sater could be a dramatic witness in any public setting. He attempted to broker this deal as part of an effort to help Trump win the presidency. And his past is certainly colorful: He once went to jail for assault, he was part of a mob-connected stock swindler, and he also served as an informant for the US intelligence and law enforcement agencies. But the public won’t get to see Sater tell the story of Trump’s efforts to make millions in Russia while running for president.

Sater was previously scheduled to testify in a public hearing in April. The testimony would have provided a much-watched follow-up to the explosive allegations made by Michael Cohen, Trump’s former personal attorney who worked with Sater on the Moscow deal, during February 27 testimony before the House Oversight Committee. Cohen said Trump and the lawyers assisting Trump’s defense had previously encouraged Cohen to lie to Congress about the Moscow venture and downplay the deal.

On Thursday, Patrick Boland, spokesman for Schiff, declined to confirm Sater’s appearance or explain why the Democrats decided against a public hearing.

The Trump-Russia investigation has yielded few hearings with principals in the scandal. The House Republicans, when they controlled that body, conducted a disjointed and rushed inquiry that included only private interviews with key witnesses and no public hearings. When the Democrats took control of the House, Schiff vowed a revived investigation. But that has not included public hearings with significant witnesses.

This week, Hope Hicks, the former White House communications director, testified behind closed doors before the House Judiciary Committee. Last week, Donald Trump Jr. appeared privately before the Senate Intelligence Committee. That committee’s Republican chairman, Sen. Richard Burr (R-N.C.), has also refused to hold public hearings with key witnesses—a stance committee Democrats say they disagree with, but they have not seriously challenged Burr. Meanwhile Special Counsel Robert Mueller has not agreed to Democrats’ efforts to secure his testimony before the House Judiciary and Intelligence committees. The chairmen of those panels say they may subpoena him.

Sater told Mother Jones that he thought the committee might prefer a closed session given the amount of sensitive national security information that could come up. “I can understand that there is [too] much NATSEC stuff for them to be comfortable with it being public,” he noted, perhaps referring to his previous role as a US government informant.

In that position, Sater helped the US government prosecute mob figures, and he claims he assisted in tracking down Osama bin Laden and other national security operations. But most of Sater’s testimony Friday is expected to focus on his work with Cohen to help the Trump Organization secure an agreement to develop a Moscow tower, which could have earned Trump hundreds of millions of dollars. The effort to land the deal, which began in October 2015, continued through at least June 2016. During his campaign, Trump repeatedly claimed that he had no business with Russia. In fact, Cohen communicated with the office of Dmitry Peskov, a top deputy to Russian President Vladimir Putin, in January 2016 to seek help with the deal. And throughout this stretch, Trump praised Putin on the campaign trail.

The Washington Post reported Thursday that Sater plans to share with the committee details about the tower effort that have not been publicly detailed, including advice he received from a former Soviet army general relating to the project.

In a speech Wednesday, Schiff cited the Moscow deal as a clear example of how the president’s personal financial interests leave him open to foreign influence. Secretly negotiating with Russians while running for president “may not be a crime,” Schiff said. “It is, however, a counterintelligence problem of the first order of magnitude.”

Schiff also said that Trump may still hope to complete the deal. “If the president continues to want to make that deal, then our policy continues to be held hostage by the profit-making incentive there,” he remarked. “So I think getting out as much information ultimately about the efforts to build that tower will be salutary by [shining] a spotlight on it.”