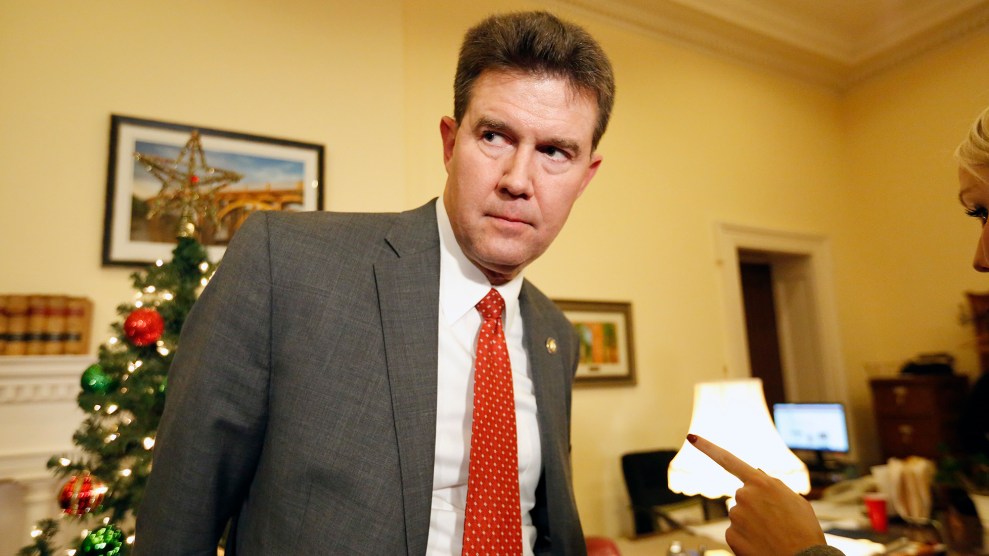 Alabama Secretary of State John Merrill speaks to the media after a special Senate election on December 12, 2017, in Montgomery. Brynn Anderson/AP

John Merrill, Alabama’s Republican secretary of state who made national headlines in 2016 by asserting that registering to vote and casting a ballot should not be easy, declared his candidacy for the US Senate on Tuesday. Merrill said Tuesday that he would not resign his post during the campaign, meaning he will oversee the rules and procedures governing his own race—a potential conflict of interest between his duties as an election official and his priorities as a candidate.

Merrill made his inflammatory comments during the filming of a documentary in 2016. Filmmaker Brian Jenkins asked Merrill why he opposed automatically registering voters when they turned 18. Merrill responded that civil rights heroes like Rep. John Lewis (D-Ga.) and Martin Luther King Jr. “fought—some of them were beaten, some of them were killed—because of their desire to ensure that everybody that wanted to had the right to register to vote and participate in the process. I’m not going to cheapen the work that they did. I’m not going to embarrass them by allowing somebody that’s too sorry to get up off of their rear to go register to vote.”

He continued: “Just because you turned 18 doesn’t give you the right to do anything.” As many people pointed out at the time, the 26th Amendment to the Constitution does in fact grant citizens who have turned 18 the right to vote.

Now, Merrill will oversee his own election as he runs in the 2020 GOP primary—against former judge Roy Moore, whose allegations of sexual assault against minors derailed his 2017 campaign against Jones, as well as Alabama Rep. Bradley Byrne and three other contenders—and then possibly the general election against Democratic Sen. Doug Jones. The situation is part of a growing trend of highly partisan secretaries of state running for higher office while remaining their state’s elections chief. Last year, Brian Kemp in Georgia and Kris Kobach in Kansas both did so in tight gubernatorial races. Kemp’s race was filled with last-minute accusations against Democrats and policy decisions that benefited his own candidacy.

Merrill, as a state senator and secretary of state, has been part of a movement, sweeping GOP-controlled states in recent years, to make it more difficult to vote—a value he seemed to defend in the 2016 documentary. As a state senator, he co-sponsored a strict voter ID law for the state; among other provisions, it required ID for absentee voting, which is used disproportionately by rural black voters. As secretary of state, he supported closing DMVs across the state in a plan that would disproportionately hit African American-majority counties where it would be more difficult to get an ID needed to vote.

In October 2017, shortly before the December special Senate election between Jones and Moore, Merrill accused nearly 700 voters of illegally voting in both the Democratic primary and the Republican runoff and threatened to prosecute them—allegations that voting rights advocates saw as a scare tactic aimed at deterring minority voters. A month later, Merrill’s office identified 140 people who had done this “crossover” voting, which had just been prohibited under a new and little-publicized law. None of the 140 voters were recommended for prosecution by local probate judges, and Merrill declined to pursue any prosecutions. But the episode shows the potential for an elections chief overseeing his own election to sow discord and fear right before voters head to the polls.