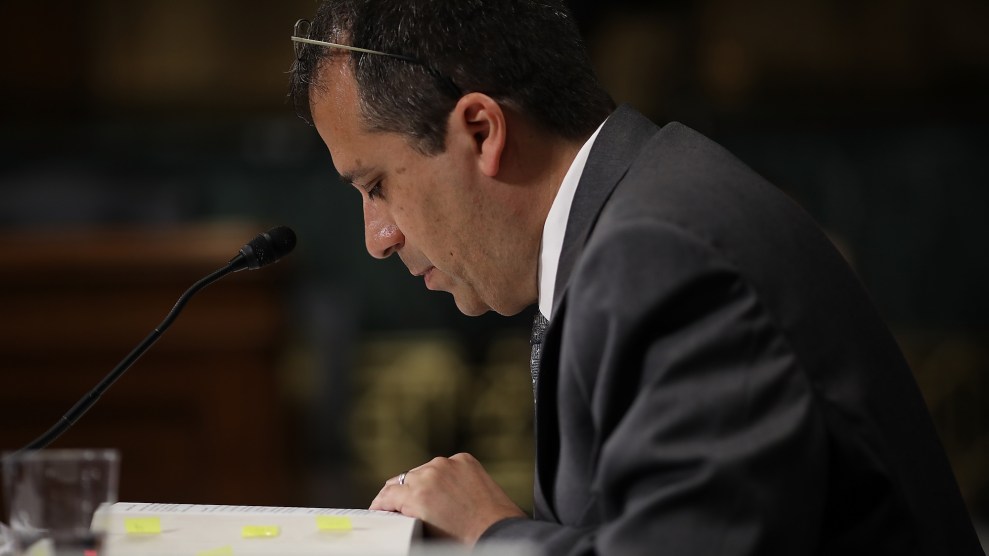 Last February, US Citizenship and Immigration Services removed the words “a nation of immigrants” from its mission statement. It was a symbolic change that captured a new, enforcement-first ethos at America’s legal immigration agency under the leadership of Lee Francis Cissna. Now Cissna, the Trump administration’s most understated and most effective immigration official, is leaving at President Donald Trump’s request.

The country’s most prominent opponents of immigration are vexed, while those who want more of it are thrilled. Both are mystified. Thomas Homan, Trump’s combative former head of Immigration Customs and Enforcement, went out of his way to praise Cissna after the resignation was reported on Friday. “I thought he was the right guy at the right time,” Homan told Fox News. “I don’t know why the White House made this decision.”

The irony of Cissna’s demise is that he was on track to do more to cut legal immigration than any other Trump official. A USCIS rule, which is expected to go into effect later this year, could bar the relatives of hundreds of thousands of working-class immigrants from obtaining green cards by labeling them “public charges” who are likely to use government benefits like food stamps and Medicaid. Experts at the nonpartisan Migration Policy Institute have written that it would be “unprecedented” to make “such sweeping changes to the character of future legal immigration” without congressional input.

Another forthcoming rule aims to block the spouses of more than 90,000 high-skilled visa holders from working in the United States while their partners wait for green cards. It will mostly affect Indian women by turning them into housewives against their will. Other Cissna reforms are so technical that they attract little attention but still have major impacts on the lives of immigrants. What united almost all of his actions was a commitment to making it harder to come to the United States legally.

The country’s most prominent opponents of immigration are vexed, while those who want more of it are thrilled. Both are mystified.

USCIS was once seen as the good guy that helped immigrants come to the country legally, while ICE and Customs and Border Protection focused on keeping people out. Cissna’s legacy lies in moving USCIS much closer to being a third enforcement agency. Doug Rand, who worked to promote entrepreneurship in the Obama White House and is now the president of a technology company that helps immigrants apply for green cards, says Americans have come to expect that Republicans will appoint someone who is skeptical of environmental protection to lead the Environmental Protection Agency. What’s new under Trump, Rand says, is that the same approach is now being applied to legal immigration.

Like most of Trump’s top immigration officials, Cissna got on the wrong side of White House senior policy adviser Stephen Miller, Trump’s immigration guru and Cissna’s temperamental opposite. Cissna moved too slowly for Miller and was finally forced out as part of a Miller-led Department of Homeland Security purge that included last month’s removal of former DHS Secretary Kirstjen Nielsen, her acting deputy, and Homan’s replacement at ICE.

Trump wants to replace Cissna with Ken Cuccinelli, a former Virginia attorney general whose immigration rhetoric is more strident than Cissna’s. But Cuccinelli is disliked by Senate Majority Leader Mitch McConnell (R-Ky.), casting doubt on his ability to be confirmed by the Senate. Once Cissna leaves on June 1, USCIS Deputy Director Mark Koumans, who is not a vocal opponent of immigration, is next in line to run the agency.

Unlike Nielsen, who had no expertise in immigration policy when she took over DHS, Cissna is a longtime immigration wonk. As a civil servant during the Obama administration, he served as DHS’s director of immigration policy before working for Sen. Chuck Grassley (R-Iowa), one of the Senate’s most influential immigration hawks. He returned to his DHS job under Trump, who quickly picked him to run USCIS.

From birth, Cissna was the opposite of a stereotypical immigration hardliner. Cissna’s mother emigrated to the United States from Peru, he spoke Spanish at home, and he went to Sidwell Friends, the Washington, DC, Quaker school that Sasha Obama attends. His degrees from the Massachusetts Institute of Technology were in political science and physics. Cissna married the daughter of a Palestinian refugee and speaks to his children exclusively in Spanish, telling senators at his May 2017 confirmation hearing that they had “almost certainly” never heard him speak more English than at the hearing.

After law school, Cissna appeared in court only twice, according to a Senate questionnaire. In both cases, he was representing asylum-seekers pro bono. But as an aide to Grassley, he worked to undercut the Obama administration’s immigration agenda from behind the scenes. In September 2016, he began volunteering as an immigration adviser on the Trump campaign.

In his rare public appearances, he avoided Trump’s obvious xenophobia. At a 2018 event hosted by the anti-immigration Center for Immigration Studies, Cissna brought along a copy of the Immigration and Nationality Act. “That’s our Bible,” he said, before citing its statutes throughout the discussion—often from memory—like chapter and verse. When it came to the public charge rule that could reshape legal immigration by fiat, Cissna portrayed it as a straightforward effort to enforce the law, not some “diabolical” plot to cut family-based immigration. He reached for his book and read a more than 100-year-old section of immigration law. It “simply states,” he said, that people likely to become a “public charge” should be kept out of the country. That provision originally targeted destitute Irish migrants, not working-class immigrants using modest government benefits.

To those aligned with Trump and Miller, Cissna was dismissed as a nebbish—“an establishment bean counter,” as one former White House official put in an interview with The New Yorker. The reality was that he was trying to build immigration restrictions that outlasted the president he served.

With Cissna gone, Mark Krikorian, the executive director of the Center for Immigration Studies, appears to be abandoning Trump and hoping that an immigration restrictionist like Sen. Tom Cotton (R-Ark.) or Sen. Josh Hawley (R-Mo.) becomes president. “Francis Cissna is a patriot whose contributions at USCIS will only become clearer over time,” Krikorian wrote on Twitter after Cissna’s ouster was reported. “I look forward to his being named DHS secretary in the eventual @SenTomCotton or @HawleyMO administration.”