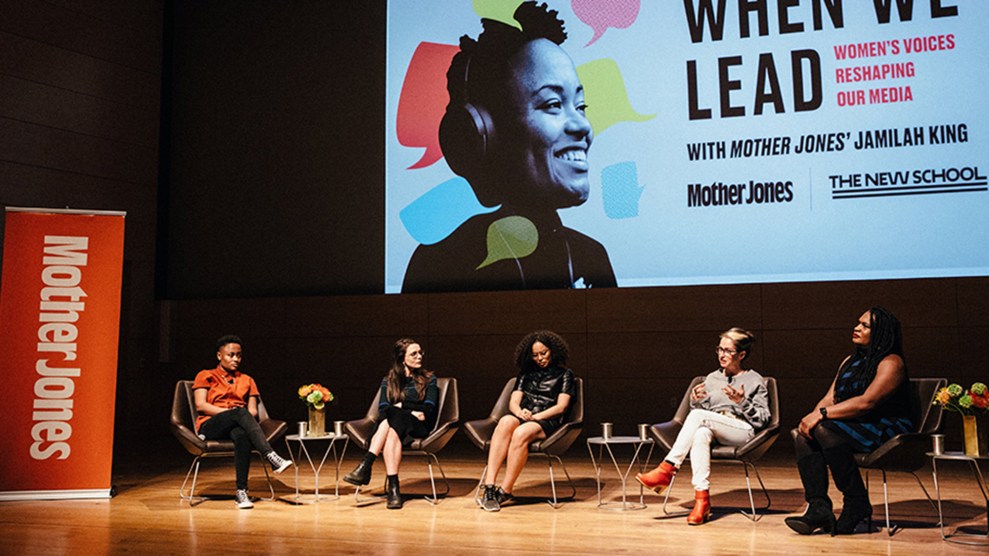 From the #MeToo movement to the fight for workplace equality to the dystopian abortion bills popping up around the country, male supremacy is plainly on the agenda in the run-up to the 2020 presidential election. How should the media, particularly women in media, cover such a fraught moment?

To help guide us toward an answer, Mother Jones’ race and justice reporter, Jamilah King, recently hosted two live events in New York City that brought together five women journalists of various ages and backgrounds. First, Jamilah spoke with Jessica Yellin, CNN’s former White House chief correspondent, at The Wing DUMBO, a women-only space in New York City, to discuss Yellin’s new novel, Savage News; the 2020 presidential election; the not-so-secret bro culture of cable news; and life after TV news. This is the first time in 20 years she won’t be covering an election for a network.

Yellin’s professional career was ripe for a tell-all memoir. She went a different route, writing a fictionalized account of her experience in broadcast journalist. This wasn’t just a matter of discretion. “I didn’t want to name names. I didn’t want to be taking the trash out on anyone. My critique is not of any person or one institution. It’s a system.”

This week’s episode of the Mother Jones Podcast also contains highlights from another live event Jamilah hosted at Manhattan’s New School. The conversation features some of today’s leading women in media discussing the challenges and the hope of achieving equality in the industry: Imara Jones, a black transgender woman and host of The Last Sip on Free Speech TV; Antonia Hylton, correspondent and producer for Vice News Tonight on HBO; Kat Aaron, an organizer and producer at Pineapple Media; and Allie Maloney, senior politics editor at Teen Vogue.

Listen to Jamilah’s interviews in this week’s episode of the Mother Jones Podcast: