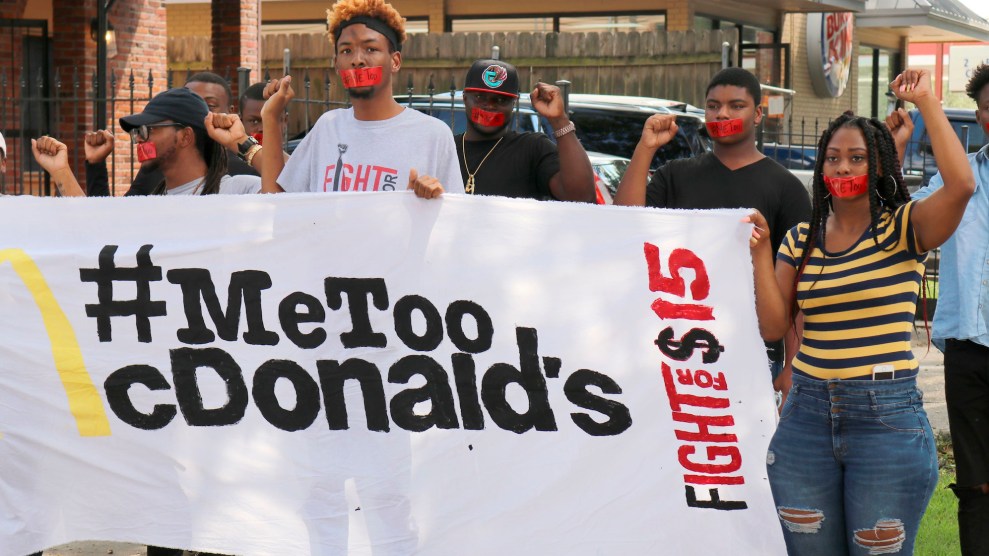 On Thursday, thousands of McDonald’s workers in more than a dozen cities plan to participate in a one-day strike, walking off their jobs to demand better pay, greater workplace protections, and cooperation from the company with efforts to form a union. But they’ll also have another message: Now is the time for presidential candidates to win their votes.

“The number one job of any president should be to raise the standard of living for workers.”

Thursday’s strikes will coincide with the launch of the 2020 program of Fight for $15, a fair-wage campaign that seeks to make workers’ right a centerpiece of the coming election. The McDonald’s protests are just the start of what the organization says will be a major mobilization in the early primary states of Iowa, South Carolina, Nevada, and New Hampshire”; increased union town halls; voter engagement drives; and protests at the first two Democratic debates.

“It’s time for those who have been elected—or want to be elected—by working people to fight alongside us, no exceptions,” said Mary Kay Henry, president of the Service Employees International Union, which funds Fight for $15, in a statement.

“The number one job of any president should be to raise the standard of living for workers and our families, no matter where we work or live,” said Westley Williams, a Miami McDonald’s worker, in a statement. “The best way to do that is by making it easier for us to join together in a union. With the Fight for $15 2020 program, everywhere 2020 candidates go, we’ll make sure they hear loud and clear that now, more than ever, working people like me need the right to join together in a union.”

So far, five Democratic White House hopefuls have committed to joining workers in their efforts. Julián Castro, Jay Inslee, and Bill de Blasio will be marching in separate cities. Bernie Sanders will host a live town hall from Dallas, where the company’s annual shareholders meeting is taking place, and Cory Booker will call into the Kansas City strike.

If 2018 is any indication, groups like Fight for $15 will have a lot of organizing power to lend to Democratic contenders. And the candidates have reciprocated. The field has latched on to a series of worker actions over the past few months, including showing up on the frontlines of Stop and Shop worker protests in New England and promising to not use Uber and Lyft last month during a one-day drivers strike.

Sanders in particular has mobilized his supporters to join labor protests. He’s used his email list to mobilize local support for worker actions at seven different companies, including Delta employees, who recently accused the company of violating federal labor law by firing and surveilling employees attempting to unionize. On Wednesday, the campaign sent out an email asking supporters in Iowa and other states to show up on the McDonald’s picket line.

“We’re building the largest volunteer army in the nation, not just to win the Democratic nomination, but also to mobilize people to show up in key fights where people’s lives and livelihoods are on the line,” said Claire Sandberg, national organizing director for the campaign. “We don’t see an immediate transactional benefit to doing this. It just came down to seeing an opportunity where we could use the organizing infrastructure that we’ve built in support of workers and give our volunteers an opportunity to do something that could be meaningful.”

According to the Sanders camp, its participation stems from a mix of campaign organizers on the ground identifying opportunities; pre-existing relationships with unions (such as in the case with Fight for $15); and, on occasion, direct requests from workers themselves.

The McDonald’s protests come on the heels of three civil rights lawsuits against the fast food giant and a raft of complaints filed this week with the federal Equal Employment Opportunity Commission and the Occupational Safety and Health Administration. Fight for $15, which was a part of the coalition that brought the complaints and lawsuits, has in the past three years helped workers file more than 50 complaints and suits against the company.

While Thursday’s protest is in part a follow-up to a walkout last September over sexual harassment at the company, both the OSHA complaint and a new watchdog report assert that McDonald’s employees deal with a staggering array of workplace safety risks. According to data from a new National Employment Law Project report, more than 21 calls are made on an average day to emergency services from Chicago McDonald’s stores. “Most notably,” the report states. “One store had 1,356 calls made to 911 over a three-year period, but the media only covered two incidents at this store during this time.”

McDonald’s did not respond to a request for comment about the report. The company has said it is trying to improve its policies regarding sexual harassment. On Monday, its CEO wrote a letter to Senator Tammy Duckworth, stating that the company had “enhanced” its sexual harassment policies and had begun working with Rape, Abuse & Incest National Network on misconduct training.