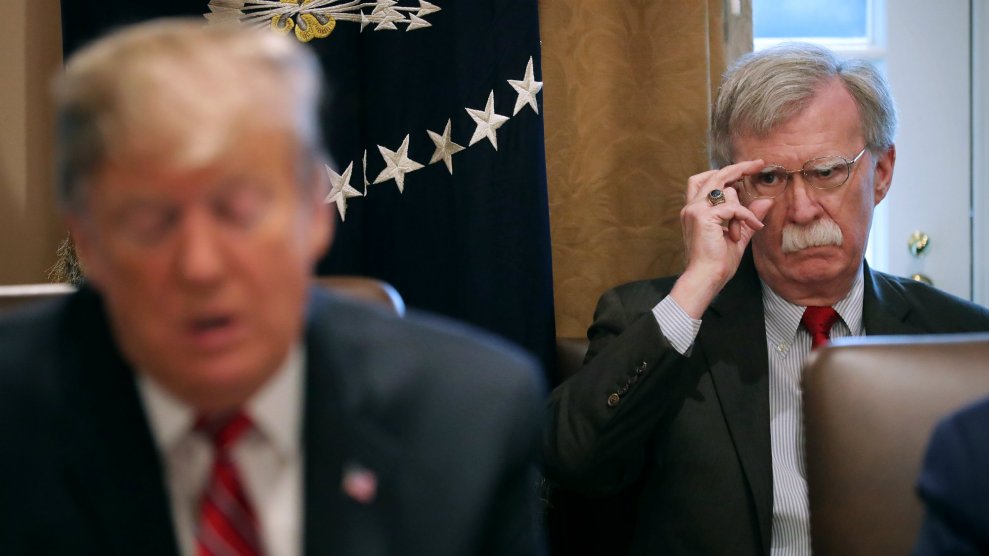 Fourteen months into his tenure as national security adviser, John Bolton has become a central figure in the run-up to what could be the most extensive American military offensive since the invasion of Iraq. Tensions between Iran and the United States have been high for weeks, beginning with a menacing video Bolton released in February targeting the Iranian supreme leader and reached a boil last week when, according the New York Times, he ordered the Pentagon to prepare to send as many as 120,000 troops to the Middle East to counter Iran.

His saber-rattling in the Middle East comes on the heels of his recent and unsuccessful public campaign to topple President Nicolas Maduro of Venezuela, which left President Donald Trump complaining privately that Bolton wants to get him “into a war,” the Washington Post reported. Trump, long an opponent of America’s “endless wars” despite initially supporting the Iraq invasion, reportedly “prefers a diplomatic approach” to Iran as well and “wants to speak directly with Iran’s leaders,” a Post story noted Wednesday evening. The ensuing debate has left Trump, who once promised to “bomb the shit” out of Islamic State terrorists, in the unusual position of moderating his notoriously hawkish national security adviser.

“He has strong views on things but that’s okay,” Trump said during a White House press conference last week. “I actually temper John, which is pretty amazing.”

What’s also pretty amazing is how frequently Bolton has argued in favor of regime change in Iran, an enemy he has been fixated on for decades. As early as May 2002, Bolton considered Iran’s “ongoing interest in nuclear weapons” a threat to the United States on par with North Korea and Iraq. Then the top arms control official in the State Department, Bolton continued to emphasize the threat of Iran to American security and the security of Israel, even during the lead-up to the invasion of Iraq. In February 2003, he assured Prime Minister Ariel Sharon during a visit to Israel that “it would be necessary” for the United States to “deal with” threats from Iran, Syria, and North Korea after ousting Saddam Hussein. The prior year, a senior British official told Newsweek that President George W. Bush’s national security team was fixated on Iran even more than Iraq. “Everyone wants to go to Baghdad,” the official said. “Real men want to go to Tehran.”

But why does Bolton care so much about Iran, a country that for decades was a pariah in the international community and kept in check by the stranglehold of American sanctions? The none-too-simple answer resides in his understanding of America’s place in the world and opposition to any limits on American power.

The roots of Bolton’s warmongering against Iran

As a diplomat and national security official across four Republican administrations, from Ronald Reagan to Donald Trump, Bolton has made the case for regime change in North Korea and Syria, among other places. But Iran remained a persistent concern for him, due to its alleged links to terrorism and burgeoning nuclear program. Once he left his position as ambassador to the United Nations in the Bush White House in 2006, he began more openly criticizing Bush’s Iran policy as too soft, calling it “four and a half years of failed diplomacy.” In an appearance on Fox News in 2008, Bolton argued in favor of bombing Iranian camps that the US said were training insurgents to oppose American troops in Iraq. “This is not provocative or preemptive—this is entirely responsive,” he said. “If we don’t respond, the Iranians will take it as a sign of weakness.”

“This is not provocative or preemptive—this is entirely responsive. If we don’t respond, the Iranians will take it as a sign of weakness.”

His enmity was further inflamed when President Barack Obama began negotiating with Tehran to eliminate their nuclear program. Bolton dismissed the prospect of diplomatic solution in several opinion pieces. “The inescapable conclusion is that Iran will not negotiate away its nuclear program. Nor will sanctions block its building a broad and deep weapons infrastructure,” he wrote for the New York Times in March 2015, four months before Obama announced a deal with Iran that had broad international support in blocking the rogue state’s pathway to creating a nuclear weapon in exchange for partial sanctions relief.

Bolton rejected this outcome. Only a military strike “like Israel’s 1981 attack on Saddam Hussein’s Osirak reactor in Iraq or its 2007 destruction of a Syrian reactor” can do the job, Bolton wrote. He failed to mention that Israel’s premeditated strike on Osirak was condemned at the time by the United Nations and troubled US officials in the Middle East. Even Ronald Reagan confided to his journal that when this happened he believed “Armageddon is near.”

For Bolton, diplomacy with Iran has never been a realistic option. Last year, he argued that “America’s declared policy should be ending Iran’s 1979 Islamic Revolution before its 40th anniversary.” On the fortieth anniversary of the revolution that toppled Iran’s US-backed shah and led to the creation of modern Iran, Bolton released a video implying Ayatollah Ali Khamenei would not be in power for long. “I don’t think you’ll have many more anniversaries to enjoy,” he said.

He’s offered no less than a full-throated endorsement for regime change in other venues too. In 2016, he gave a speech in Paris to tens of thousands of supporters of the Mujahideen-e-Khalq, a group of Iranian exiles who were responsible for a series of bombings in Iran prior to the revolution, including one that killed six Americans. The MEK supported the Iranian Revolution and were cheerleaders for the takeover of the American embassy in Tehran, which led to the kidnapping of more than 50 American citizens for over a year, but ultimately broke with the ruling clerics and went into exile. The group is considered by some Iran experts to be a cult and, for more than a decade, was listed as a terrorist group by the United States. Bolton has been attending the MEK’s annual event for at least a decade, the New Yorker has reported.

“There is only one answer here: to support legitimate opposition groups that favor overthrowing the military theocratic dictatorship in Tehran,” he said. “Let me be very clear, it should be the declared policy of the United States of America and all its friends to do just that at the earliest opportunity.”

At the group’s rally the following year, in 2017, Bolton vowed to celebrate the fall of the regime “before 2019.”

#JohnBolton 8 months ago among MEK supporters tells them they will overthrow #Iran’s regime and celebrate in #Tehran with Bolton himself present, “before 2019” pic.twitter.com/H7oaaU3faU

Once Trump took office but before Bolton joined the administration, he pursued his hawkish agenda by lobbying to rip up Obama’s nuclear deal. The agreement was “execrable” and should be abrogated “at the earliest opportunity,” Bolton wrote in August 2017 in the National Review. “We can no longer wait to eliminate the threat posed by Iran.”

The hawk in Trump’s Situation Room

Since joining the Trump administration last year as national security adviser, replacing HR McMaster, who urged Trump to maintain the Iran deal, Bolton has had some success in escalating the pressure on Tehran and reducing its sources of revenue through sanctions. Last year, his efforts to persuade Trump to leave the nuclear deal finally succeeded, although several European allies remained in it. He warned Iran of “hell to pay” if it crosses the US, and proclaimed that an American military presence would remain in Syria indefinitely until “Iranian proxies and militias” left the country. Even though Trump ignored that last promise when he announced the withdrawal of US troops from Syria in December, Bolton kept pursuing military solutions to challenge Iran.

“I am convinced that John Bolton has calculated that he has about 18 months to start a war with Iran or he’ll miss his chance,” says Joe Cirincione, an expert on nuclear weapons policy and the president of the Ploughshares Fund, a global security foundation. “They want Iran to be like Japan at the end of World War II.”

“I am convinced that John Bolton has calculated that he has about 18 months to start a war with Iran or he’ll miss his chance.”

Bolton reportedly asked the Pentagon in September for options to strike Iran after a Tehran-linked group fired mortar shells toward the American embassy in Baghdad, which “landed in an open lot and harmed no one,” the Wall Street Journal reported. Bolton’s request concerned US officials who spoke with the Journal.

“It definitely rattled people,” a former senior US administration official told the newspaper. “People were shocked. It was mind-boggling how cavalier they were about hitting Iran.”

That request was a prelude to what Bolton would ask of the Pentagon this month. In response to intelligence that Iran was planning to strike US military assets in the Middle East, Bolton announced the early deployment of an aircraft carrier and several Air Force bombers to the region. (The US routinely deploys carrier groups to the Gulf region and this particular one had already departed Virginia on April 1, well before Bolton’s statement about the Iranian threat.)

Sources with knowledge of the intelligence quickly threw cold water on the severity of the threat. “The administration blew it out of proportion, characterizing the threat as more significant than it actually was,” multiple anonymous Trump officials told the Daily Beast. In a briefing to reporters at the Pentagon, the second-ranking general in the US-backed coalition to fight ISIS suggested there had been no increase in threats toward American forces. “There are a substantial number of militia groups in Iraq and Syria, and we don’t see any increased threats from many of them at this stage,” the British general, Chris Ghika, said. (US Central Command later dismissed these comments in a rare rebuke of an allied general, insisting there are “credible threats available to intelligence from U.S. and allies regarding Iranian backed forces in the region.”) Nonetheless, US officials used the intelligence to justify removing nonessential diplomats from its embassy in Baghdad on Wednesday.

Now the US is considering another series of military options despite Trump’s apparent opposition. The New York Times reported Tuesday that “Acting Defense Secretary Patrick Shanahan presented an updated military plan that envisions sending as many as 120,000 troops to the Middle East should Iran attack American forces or accelerate work on nuclear weapons.” Trump denied the story and said, if military action were taken against Iran, “we’d send a hell of a lot more troops than that.”

The newspaper said the plans were ordered by “John R. Bolton.”