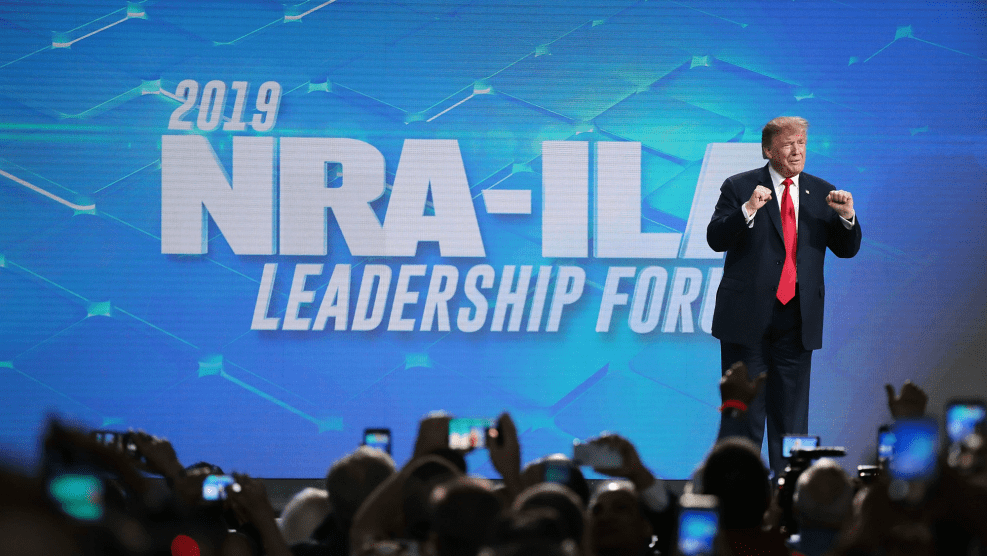 A gun safety group, Giffords, and a campaign finance watchdog, the Campaign Legal Center, are suing the Federal Election Commission for failing to act on multiple complaints alleging that the National Rifle Association unlawfully coordinated with Donald Trump and other Republican candidates in recent elections. And the lawsuit is poised to act as a major test for the FEC chair’s new strategy to try and force the agency to take more aggressive action to police campaign finance.

Ellen Weintraub, the chair of the FEC, can’t discuss specific ongoing cases, but her recent statements make it clear that she doesn’t plan on voting to defend the agency in any cases involving delays in agency action. If she follows through on this promise, it would result in the first actual instance of her utilizing a new strategy, as Mother Jones first reported, to effectively sabotage her own agency in order to enforce campaign finance law, a move that one former FEC lawyer termed the “nuclear option.”

“I find myself in the odd position of sometimes rooting for us to lose.”

It’s not exactly clear what will happen in court after the chair decides not to use legal resources to defend her agency, but it is likely that a judge will force the FEC to take action and consider investigating the NRA for potential campaign finance violations. This lawsuit is only regarding the delay by the FEC to respond to Giffords’ complaint, the actual merits of the complaint regarding the NRA would have to be considered by the FEC.

It is extremely rare for an organization to sue the FEC for a delayed response to a complaint, but according to Giffords and CLC there is a specific time sensitivity to the NRA case which has pushed them to take more drastic steps. The groups say they cannot wait for months, or years, for the FEC to respond in this case.

“We scrupulously follow the law,” NRA spokesperson Jennifer Baker said in a statement to CNN in response to the Giffords lawsuit. “This latest effort by Giffords and the Campaign Legal Center is a frivolous lawsuit based on a frivolous complaint.”

The lawsuit claims that the NRA used a complicated scheme to evade campaign contribution limits and shield millions of dollars of political spending—including up to $25 million coordinated to help Donald Trump’s presidential campaign—from public scrutiny. Over the past nine months, Giffords filed four separate administrative complaints with the FEC and it missed a 120-day deadline to act on the complaints.

According to a 2016 investigation by NBC 4 Washington into FEC procedures, it took the agency an average of 653 days (or 22 months) to decide whether it will even launch an investigation, and some complaints lingered for almost five years before getting to that critical vote to just begin an investigation, let alone make a final determination if an entity has violated campaign finance law. There has also been a dramatic increase in the number of deadlocked votes on major cases since 2006, resulting in a lack of enforcement and significantly lower penalties.

Weintraub, a commissioner with the agency since 2002 who became chair in January, has become increasingly frustrated by the FEC’s lack of enforcement of the law, which has led to less disclosure, less transparency, and more dark money within the campaign finance system. This is why she is threatening to break from past precedent and not defend her own agency in court.

“I find myself in the odd position of sometimes rooting for us to lose,” Weintraub told Mother Jones earlier this year. That’s because the partisan divide among FEC commissioners has generally left the agency at an impasse, with fewer campaign finance violations resulting in investigations—let alone actual penalties.

It’s worth noting, however, that if the FEC doesn’t defend itself in this lawsuit, the Department of Justice, the NRA, or the campaigns involved could try to defend the FEC on its behalf, but multiple campaign finance lawyers said it seemed unlikely a judge would allow another entity to defend the FEC at this stage in the lawsuit.

Conservatives, on the other hand, say that Weintraub is damaging the ability to have fair adjudications of federal election law. They hope that a judge might independently demand that the FEC respond to the lawsuit, and give the agency another chance to send legal counsel before granting Giffords and CLC a victory in court.

“These are new waters for administrative and constitutional law,” says Benjamin Barr, a conservative campaign finance lawyer and former counsel to two FEC chairs. “Weintraub’s gambit damages the legitimacy of the FEC, the rights of people unfairly facing enforcement actions before the Commission, and selfishly seeks to place her drive for utopian reform above that of other duly appointed commissioners. In her wake, the rule of law suffers.”

Weintraub previously told Mother Jones in an interview that campaign finance rules aren’t up-to-date with the massive influx of outside spending of the super-PAC era, and the agency has struggled to stay on top of policing coordination between campaigns and outside groups. “We still have not rewritten the coordination rules since Citizens United in 2010,” she said. “It’s just mind-blowing.”