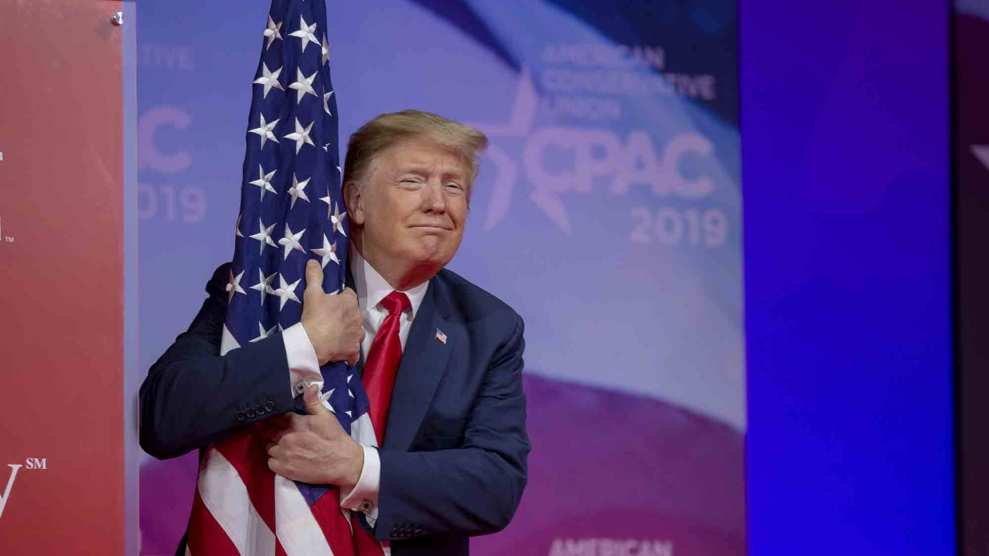 This year’s Fourth of July Celebration in Washington, DC—a typically nonpartisan affair that attracts hundreds of thousands of celebrants to the nation’s capital—will break from tradition, thanks to President Donald Trump.

The president has ordered that the massive fireworks display that usually takes place over the National Mall be moved to West Potomac Park, closer to the Potomac river. And in an unprecedented move, he’s also considering a new star for the show: himself.

According to multiple administration officials who spoke to the Washington Post, the president is “making tentative plans to address the nation from the steps of the Lincoln Memorial” during this year’s independence day festivities. The Post adds:

The president’s starring role has the potential to turn what has long been a nonpartisan celebration of the nation’s founding into another version of a Trump campaign rally. Officials said it is unclear how much the changes may cost, but the plans have already raised alarms among city officials and some lawmakers about the potential impact of such major alterations to a time-honored and well-organized summer tradition.

The traditional event has been staged for more than 50 years, and has long included fireworks on the mall organized by the National Park Service, as well as a concert near the Capitol featuring the National Symphony Orchestra and a lineup of major musical stars. Last year’s concert, for instance, featured The Temptations, The Beach Boys, Jimmy Buffett, and a slew of other household names.

Trump’s new plan, now a “top priority” assigned to Interior Secretary David Bernhardt according to the Post, is being called “A Salute to America.” The president is also considering adding a second stage with additional entertainment elsewhere in Washington.

Former Trump aides told the Post that Trump’s idea for a revised Fourth of July celebration began “hours” after he attended a 2017 Bastille Day parade in France, while on the plane back to the United States. Trump originally proposed having a military parade similar to what he’d seen in Paris, with tanks in the streets and military planes flying overhead, in Washington, DC.

The idea morphed into a military parade to be held in November 2018 on Veterans Day. However, the Pentagon postponed the event following reports that the tab for such a parade and corresponding security would run up to $92 million.

In February of this year, however, the president seemed to return to the idea of a massive, Trump-heavy Washington DC event, and previewed his new plans for independence day.

HOLD THE DATE! We will be having one of the biggest gatherings in the history of Washington, D.C., on July 4th. It will be called “A Salute To America” and will be held at the Lincoln Memorial. Major fireworks display, entertainment and an address by your favorite President, me!

Since then, Trump has grown obsessed with the details of the event, according to administration aides who spoke to the Post: “The president has received regular briefings on the effort in the Oval Office and has gotten involved in the minutiae of the planning—even discussing whether the fireworks should be launched from a barge in the Potomac River,” the newspaper notes, adding that aides report the “president has shown interest in the event that he often does not exhibit for other administration priorities.”

It is unclear how much changes to the event to accommodate the president’s wishes could cost taxpayers. An official from the D.C. mayor’s administration told the Post that the city will expect the federal government to pick up the tab for any additional expenses.